On April 30, 2020, Yale Professor Emeritus Charles Russell Krigbaum died at the age of 91 in Beverly, Massachusetts. To generations of Yale organ students he was a much-beloved teacher.  His thirty-six years of service on the School of Music faculty spanned the regimes of four deans and five Yale University presidents. His performances, lectures, and masterclasses took him throughout the United States, to Europe, and to Asia.

Charles Krigbaum was born on March 31, 1929 in Seattle, Washington and grew up in New Jersey, where he studied piano with Margaret Maas and organ with Margaret McPherson Dubocq.  He earned Bachelor of Arts (’50) and Master of Fine Arts (’52) degrees from Princeton University, where he was a pupil of Carl Weinrich.  Following his completion of Naval Officer Candidate School and three and a half years of active duty, he received a Fulbright grant to study at the Hochschule für Musik and at the Goethe University in Frankfurt from 1956 to 1958; Helmut Walcha and André Marchal were his European teachers for organ.

Upon his return, he joined the faculty at Yale, where there was a need for a junior instructor in organ and a desire to have professional leadership for music in Marquand Chapel at the Divinity School. The choir flowered under his well-organized management; with membership established at twenty-four voices, there was soon a waiting list.  Concerts in churches where alumni were ministers gave added interest to the work of the singers, and within a few years his success led to an appointment as conductor of the University Choir in Battell Chapel, a position he held from 1961 to 1973, when the Institute of Sacred Music came to Yale, bringing Robert Fountain as the head of an entirely new choral program.

During Charles’s time with the University Choir, the building of a new choral library was begun, an important responsibility which he undertook with keen personal interest. Works commissioned during Charles’s tenure included a choral Mass by Richard Donovan for unison men’s voices, with optional trumpet and tympani.  “A very fine piece,” Charles later recalled.  Donovan’s Magnificat (TTBB voices) and his organ piece Antiphon and Chorale were later recorded in Battell Chapel for CRI.

Photo: Charles Krigbaum with his colleagues Thomas Murray and Robert Baker in an undated photo 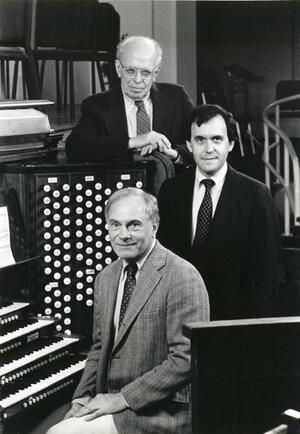 Charles was instrumental in the design of the H. Frank Bozyan Memorial Organ, installed in 1971, a significant legacy from his tenure at Yale.  Bozyan (“Uncle Frank”) had been University Organist and a longtime member of the organ faculty until his retirement in 1965. Within a few years, gifts from Bozyan’s family, colleagues, and admirers made it possible to commission the von Beckerath organ in Dwight Memorial Chapel, a distinctive addition to Yale’s collection that has had a notable influence on Yale students for nearly half a century.  Charles recalled the arrival of the organ: “Beckerath had suffered through a very difficult time installing an organ in New York City only a few months earlier.  I was determined to make everything as happy for him and his crew as possible, and I believe it shows in the result.  We gave them feasts of corn-on-the-cob, blackberry cobbler, plenty of beer, and some trips to the seashore near Newport.  John Mander, who now presides over the London firm established by his father Noel, was an apprentice with Beckerath at the time and part of the installation team.” [Ed. note: Mander retired in 2018.]

Charles played the dedication recital and five all-Bach programs.  During its first year, the organ was also played by a number of well-known visitors, but later the funding for guest performers dried up.  Charles, ever eager to bring stimulating artists to Yale, was known to offer his services gratis to organists at other universities in exchange for their appearance in New Haven.  This circumstance accounts for a memorable comment from Aubrey Thompson-Allen, curator of organs during those years, who was overheard one day making the wry observation: “Krig pro quo!”

Many events are recalled with pleasure—symposia on the Romantic Organ, on Buxtehude, Widor and Guilmant, the 1985 premiere (shared with John Ferris of Harvard) of Bach’s youthful chorale preludes in the Neumeister Collection—not to mention an unforgettable visit of the Dalai Lama.

Photo by Robert A. Lisak. Martin Jean, Charles Krigbaum, and Thomas Murray at the dedication of the Krigbaum Organ in Marquand Chapel, October 6, 2007 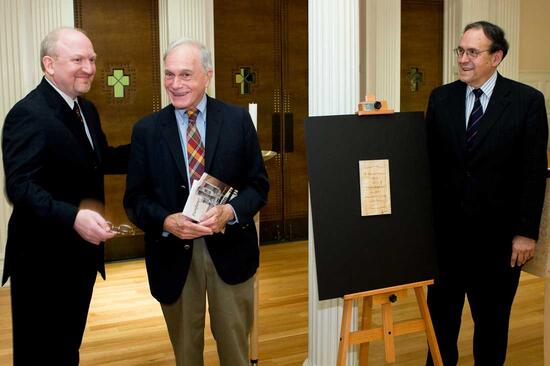 In teaching, Charles has always sought to foster well-roundedness. “Universality” was his word for it.  “A student who knows the Romantics should also be well acquainted with Scheidt and Couperin.  If the earlier repertoire is what they bring from their past experience, they should come to love Widor and Messiaen just as much.”  It is well-known that Widor and Messiaen were two of Charles’s keenest interests.  He became a staunch advocate for the renowned Newberry Memorial Organ in Yale’s Woolsey Hall as a persuasive vehicle for their music, recording much of Messaien’s organ music on LPs and later recording the complete organ works of Widor for AFKA. An unedited recording of his live performance at the Organ Historical Society’s 1975 convention was issued on a two-disc set, An Evening at Woolsey Hall.

Charles Krigbaum retired from Yale in 1995.  In 2007 a new three-manual Taylor & Boody instrument in the gallery of Marquand Chapel, commissioned by the Yale Institute of Sacred Music, was inaugurated and named the Krigbaum Organ in his honor.

Photo courtesy Thomas Murray: Charles Krigbaum at the console of the eponymous organ 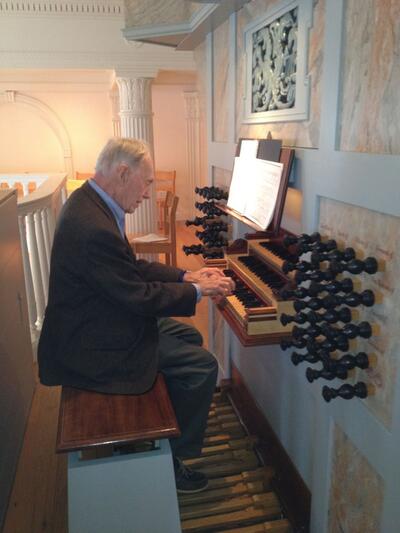 Thomas Murray is Professor Emeritus of Organ at Yale, and the former University Organist.

This is an abridged version of a tribute originally published in the July, 2020 issue of The Diapason magazine., used with kind permission.