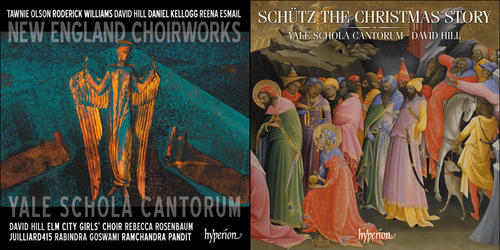 The Yale Institute of Sacred Music is pleased to announce that two new recordings of Yale Schola Cantorum, conducted by its principal conductor David Hill, have been released on the Hyperion label.

Just in time for the holidays, Schütz: The Christmas Story includes a Magnificat and other sacred works by the seventeenth-century composer, as well as the lavishly-scored, quasi-dramatic retelling of the nativity story Historia der Geburt Christi, which was designed to be performed as part of the 1660 Christmas Day Vespers service in Dresden. Soloists include ISM and Yale School of Music graduates Emilia Donato (M.M ’19) and Addy Sterrett (M.M. ’18), soprano; mezzo-soprano Ashley Mulcahy (M.M. ’19) and countertenor Bradley Sharpe (M.M. ’18); Haitham Haidar (M.M.A. ’19) and James Reese (M.M. ’18), tenor; and baritones Will Doreza (M.M. ’18) and Edward Vogel (M.M. ’19).

New England Choirworks, the other new release, offers a variety of contemporary works in different styles, all connected in different ways to New England. The Magnificat by ISM and Yale School of Music graduate Tawnie Olson (A.D. ’00) juxtaposes the Magnificat text, sung by the Elm City Girls’ Choir, directed by Rebecca Rosenbaum (D.M.A. ’07), in the style of a Bulgarian women’s chorus with that of the Ave Maria, sung by Schola; together they depict the strength of young women, and the courage and determination of Mary.

Roderick Williams’ A New England Symphony was commissioned for Yale Schola Cantorum. It is a setting of poems by New England writers Anne Bradstreet, Phillis Wheatley, James Pennington (who was the first black man to study at Yale), and John Greenleaf Whittier. The recording also includes “God be in my head” by David Hill, written in honor of the late John Scott as well as in honor of the ISM, and “Shout joy!” by ISM and Yale School of Music graduate Daniel Kellogg (M.M.A. ’03).

For Reena Esmail’s This love between us “Prayers for Unity,” also commissioned for Schola, the choir is joined by the period-instrument ensemble Juilliard415, led by Robert Mealy; Rabindra Goswami, sitar, and Ramchandra Pandit, tabla. The piece’s seven movements bring together texts from seven major religious traditions of India—Buddhism, Sikhism, Christianity, Zoroastrianism, Hinduism, Jainism, and Sufi Islam—showing how each of the traditions approaches the topics of unity, siblinghood, and being kind to one another. Each text is set simultaneously in English and in its original language (except the Christian text, where the Malayalam text is a translation) “so you can hear the beauty of the original and grasp its meaning through translation,” according to the composer, who is a graduate of both Juilliard and Yale (D.M.A. ’18). Even during dark times, she says, “my mind always returns to the last line of this piece, the words of Rumi, which are repeated like a mantra over affirming phrases from each religion, as they wash over one another: ‘Concentrate on the essence, concentrate on the light’.”

Both of these new releases are available on the Hyperion website. As of December 11, 2019, Schola’s Schütz album has been named one of the best new classical Christmas albums by BBC Music Magazine and The Guardian.