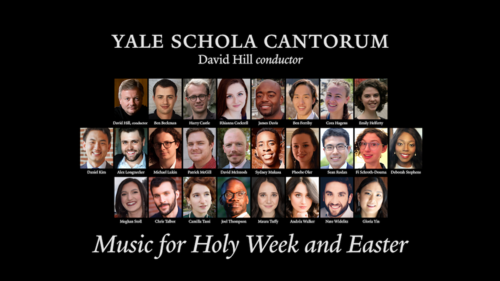 Yale Schola Cantorum, under the direction of David Hill, is excited to announce the release of four virtual choir recordings celebrating Holy Week and the beginning of the Easter liturgical season. This project features works by composers from the 16th to the 20th centuries and includes two selections by female composers—Raphaella Aleotti  and Amy Beach—as well as a work by the esteemed African-American composer, organist, and church musician David Hurd.

Each video will premiere on the Yale Schola Cantorum Facebook page and YouTube channel at noon EDT on the dates below.