I’ll begin this reflection penitently, with two confessions. First, I confess my utter lack of knowledge about Spain’s organs, repertoire, organ builders, and rich musical history prior to the study trip, preparatory master classes, and colloquia. I also confess that when Professor Jean asked people to close their eyes and raise their hands if they had never traveled outside the United States, I peeped and kept my eyes open. As further confirmation of our immense privilege, I noted that almost everybody at the ISM had previously travelled outside the U.S., and a majority had traveled to Europe.

Given our massive privilege and seeming worldliness, how is it possible that my fellow organists and I knew next to nothing about Iberian organ music and history? 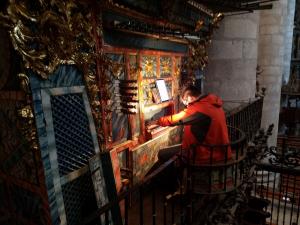 When selecting repertoire for church or concert, organists tend to pigeonhole themselves into selecting German, French, or English repertoire—perhaps a local brew is thrown in occasionally. The organ world is not the only musical sphere guilty of promoting a dominant musical aesthetic to the detriment of other musics: think of the German domination of orchestral repertoire, for instance. Within organ repertoire, Iberian music is very rarely performed, and it certainly is not studied extensively in North America. While one could argue that Iberian organ music is tailored for organs with specific characteristics—non-equal temperaments, split keyboards, and, later, chamade trumpets—the lack of representation in recital programs is telling, given the historical stretches organists readily make for other repertoire.

After the ISM study trip, the eight organists embarked on a weeklong organ tour, and we were lucky to have Natalie Grenzing, business manager for Grenzing Organ Builders, as our tour guide. Under the stellar direction of her father, Gerhardt Grenzing, her company had completed restorations of historical organs throughout Spain and constructed new organs in the cathedrals of Madrid (and Brussels), in addition to other projects around the world. Armed with a folder of organ stoplists and pictures, she explained each organ’s history before each of us got a chance to play. We played repertoire from Iberian composers such as Cabezón, Correa, and Cabanilles on these historical instruments. There was also a healthy amount of improvisation, as would have been expected of liturgical organists, especially in large cathedrals.

Through master classes with Spanish professors and the opportunity to play historical instruments, we scratched the surface of Iberian organ music interpretation and gained an appreciation for its history and repertoire, which I hope will translate into its inclusion on more recital programs; unfortunately, though, there are very few organs in North America capable of presenting this music authentically. 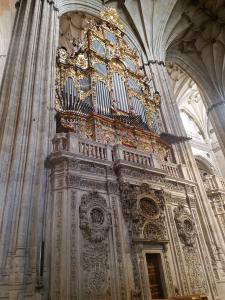 As a group, we couldn’t resist trying the organs of famed French organ builder Aristide Cavaillé-Coll in San Sebastián near the French border. Organists trotted out warhorses of the canon: Dupré’s Prelude and Fugue in B Major, Widor’s Sixth Symphony, and Duruflé’s Variations on Veni Creator. Natalie Grenzing pointed out Cavaillé-Coll’s Catalán ancestry through his grandmother, Maria Francisca Coll, and connected his Iberian ancestry to his penchant for Trompettes en Chamade. Gerhardt Grenzing told us that the Trompette Harmonique, generally thought of as a Cavaillé-Coll invention, had in fact been invented sixty years earlier by the Spanish organ builder Jordi Bosch, and was used in the organs of the Royal Palace in Madrid and the Cathedral of Sevilla. The Spanish backbone of some of our profession’s most prized instruments and repertoire was eye-opening.

The organ tour was truly revelatory; not only because of our exposure to specific historical and modern instruments, but also because it called into question the established canon that musicians perpetuate through exclusive programming. I am grateful that many of us approached the tour with a humble inquisitiveness and appreciation, willing to dive into repertoire that we didn’t know well. I’ll try to retain as many of the kernels of wisdom as possible, but I realize that we have only begun to explore some of the profound riches of the Spanish organ tradition.

As I write this reflection 33,000 feet in the air, I recall how lucky we are to have experienced the study trip and organ tour. May we always appreciate what we are given and how much we have yet to learn, especially from traditions and peoples that we often overlook. As we go into another summer, or out into the real world after graduation, I hope this passage, written by Robert Dickinson in Joby Talbot’s Path of Miracles summarizes both the study trip and the humility and thirst for knowledge that the ISM strives to instill:

Photo 2: Spanish chamades, reed stops in a pipe organ that are mounted horizontally rather than vertically (photo by David Simon)