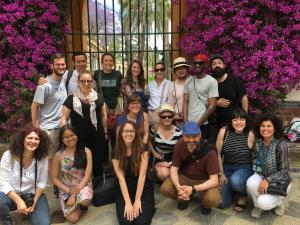 I honestly didn’t quite know what I was getting into when I applied for the arts and architecture trip to southern Spain. In high school Spanish class I was captivated by a presentation about the beauty of the Alhambra, and it was this vague wonder that initially spurred me to apply for the trip, hoping that such a trip might include a visit to that palatial complex. Thanks to the ISM and our fearless leader Luly Feliciano, not only was this dream of visiting the Alhambra realized, but the tour also deepened my interest in Spanish history and developed my knowledge of religious art and architecture.

The arts and architecture extension of the ISM’s 2018 Study Tour included visits to sites in Sevilla, Córdoba, Jaén, and Granada. In each of these locations, with the guidance of local guides and our own professors, we had the opportunity to delve into the specific history and current use of many sacred spaces. Through an examination of the complicated histories and current controversies of these diverse locations, a more nuanced picture of Spanish history emerged. As we learned that many of the churches and cathedrals were built on the sites of demolished mosques, and that often mosques and synagogues were simply repurposed as Christian churches, we began to understand that the story of religion in Spain is far more complicated than we had imagined.

One of the most interesting sites we visited was the Real Alcázar in Sevilla, a fourteenth-century palace built for the Christian king Pedro I of Castilla on the site of a demolished Muslim fortress. It is a large complex decorated with vivid tile designs and complex plaster elements. The palace contains many courtyards, pools of waters, and a lush garden. Though much of the architecture and landscaping emulated prominent Islamic styles, it is in fact a Christian site. It was fascinating to wander around and consider the ways in which motifs and architectural features were incorporated in such a context. Many elements were simply part of the visual language of the court and indicated high status, yet through such appropriation, the narrative of conquest and dominance was impossible to avoid. 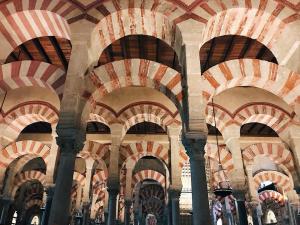 In contrast, the Great Mosque of Córdoba was originally built as a place of Islamic worship, yet when King Ferdinand III captured Córdoba in 1236, the mosque was turned into a cathedral. It is a striking building filled with over 800 columns, many of which are spolia, architectural elements taken from an earlier Roman temple. Walking into the building, I was struck by how little it looked like a cathedral. At first glance, the layout suggested its identity as a large mosque; however, as I began to walk around, I quickly noticed the many chapels that had been built along the perimeter, and I marveled at the presence of both Qur’anic inscriptions and crucifixes. At times the juxtapositions were bewildering, so I greatly appreciated our professors’ nuanced commentary as we explored the unique space.

While we toured many popular locations, some of our excursions were a bit off the beaten path, as in the case of the city of Jaén. Even our bus driver tried to convince our trip leader to take us elsewhere, kindly offering the names of many cities that we might find more interesting than the small, industrial town. Nevertheless, we pressed on to Jaén, and not only did we have the opportunity to learn about a stunning cathedral, we also were able to visit some incredibly well preserved Arab baths. The group enjoyed learning about the bathing practices that would have occurred there, and this particular location helped us to widen our understanding of sacred spaces.

The final portion of our trip was spent in the beautiful city of Granada. After a steep hike up to the compound, we finally got our first glimpses of the magnificent Alhambra. Our tour guide expertly unpacked the layers of history embedded in the palace, taking us into incredible spaces normally off-limits for tourists. After having seen a Christian site built in an Islamic style and a mosque repurposed as a Cathedral, it was interesting to consider both the way the palace originally functioned and the how it changed after the Christian invasion in 1492. For example, hidden amid the geometric patterns and poetic calligraphy typical of Islamic architecture, small symbols, such as a yoke and arrows, reminded us that Ferdinand and Isabella also used the space.

The Alhambra was one of the highlights of the tour for our group. We were enchanted by the star-filled ceiling of the throne room and we all delighted to gaze into the many long reflecting pools and fountains that decorated the various courtyards. The Generalife Gardens were by far the most beautiful gardens I have ever seen, and I enjoyed wandering around them for a considerable amount of time as I reflected upon the ways that gardens had been represented throughout the inside architecture, and how those same motifs could be found alive and in color in the outdoor space.

In addition to the rich experiences provided by our official itinerary, we also enjoyed many spontaneous adventures. We loved exploring the city’s many unique shops, partaking of the region’s cuisine, meeting locals, and visiting additional historic sites. Overall, the chance to spend time together in a smaller group and share so many cultural experiences was an incredible gift. Not only did we share a transformative educational tour, but we also deepened our relationships with one another through the abundant quality time.

The Art and Architecture extension of the ISM Study Tour impacted our whole group academically, personally, and often spiritually as well. I am grateful for such a beautiful experience, and I am eager to continue to learn with this fabulous community throughout my next two years here at Yale. I have no doubt that memories of this trip will continue to echo on both in my life and in my creative work.

Photo 2: The Mezquita in Cordoba proved to be a highlight of the art and architecture students and faculty alike (Photo by Hannah Sachs)