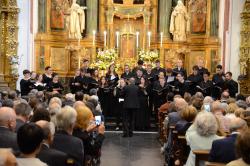 Commissioned in 2005, Joby Talbot’s Path of Miracles is a mostly a cappella choral work inspired by the Camino de Santiago. Today, pilgrims of all creeds trek the nearly 500 miles on foot for a wide variety of reasons. But for medieval pilgrims, this journey was largely devotional, culminating in the arrival at the Cathedral of Santiago de Compostela, where legend has it that the remains of the martyr St. James are interred. As an American singer who primarily studies European music of centuries past, the opportunity to perform Path of Miracles in the cities that inspired this piece and for audiences connected to the Camino was unlike anything else I’ve ever experienced.

Each movement of Path of Miracles is named for one of the cities along the Camino. Roncesvalles, a town near the border between Spain and France, is where many pilgrims begin their journey. After driving through narrow, winding roads that climbed high into the Pyrenees, we arrived at quaint Roncesvalles. It seems like the only permanent residents of this tiny village are a few clergymen. Nonetheless, Roncesvalles was bustling with the energy of pilgrims who piled into the small stone church for Mass, followed by our performance of Path of Miracles. At the end of the Mass, the priest called all pilgrims to the altar for a special blessing. What struck me most was the pilgrims’ international diversity—some traveled to tiny Roncesvalles from countries as far away as South Korea and South Africa. The priest repeated his blessing in nearly a dozen different languages. This immediately reminded me of Path of Miracles, a textual conglomeration of modern and ancient languages that are often sung simultaneously. This milieu of languages was perfectly reflected in our international audience that night, a group of individuals who had taken so many different paths to start down the path at Roncesvalles. 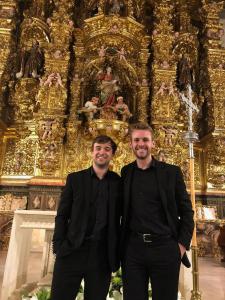 The audience in Roncesvalles was our only audience consisting almost entirely of Camino pilgrims, which made this performance special. This was a very different audience than the usual New Haven or New York audience. People chattered (some loudly), fidgeted on creaky wooden pews, coughed and sneezed with abandon, as children hopped around, and programs rustled. Personally, I wouldn’t have had it any other way. This performance was for the pilgrims, and it was so incredible to share this music about pilgrimage within the context and culture of pilgrimage, rather than trying to adapt the audience’s personal experience to the culture of the modern concert hall. The audience was so appreciative, and it was rewarding to know that our music was a component of someone’s Camino experience.

Singing for this audience of pilgrims made many musical moments in this movement come alive for me in a new way. The opening of “Roncesvalles” captures the essence of beginning and initiation. The slow, amorphous vocal ascent of the tenors and basses feels like a mini-journey in and of itself; it conveys a sense of mysticism that sets the tone for the miracle of St. James referenced throughout the piece. There are also many moments in this movement that seem to look back in time, evoking a sense of the ancient with chant-like simplicity, all within the context of contemporary compositional idioms. Such moments reminded me of the Camino’s long history and its many traditions that carry into the present.

If I had to sum up “Burgos,” the second movement in Path of Miracles, in one word, I’d choose “struggle.” By the time pilgrims arrive in Burgos, they have been walking for over a week. This movement focuses on the hardships of pilgrimage, both practical and spiritual. In contrast, if I had to choose one word to describe the third movement, “León,” I’d choose “light.” “León” focuses on beauty in a meditative mode. Our audiences in both of these cities contained only a few pilgrims. However, it was apparent that many people were well acquainted with the Camino—living beside it, or perhaps having once walked it. 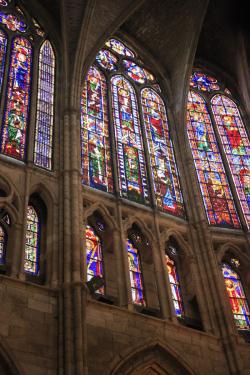 I sensed an immense pride for the Camino as a site of national patrimony among the audience members who greeted us after the concerts. Two particular audience members in León were excited to learn that two Schola singers planned to walk the Camino after the tour. “Eutrea esusea!” they exclaimed, invoking a travelers’ blessing that we sing in Path of Miracles. The text came to life in Burgos and León, and I loved hearing everyone’s observations as we experienced moments from the narrative. It was amazing to see the “carved apostles in the Puerta Alta” at the Burgos Cathedral, to drive along the Camino past “sheep track” and “hermits’ cave.” I loved talking to one singer who visited the cathedral in León. As she looked at the famous stained glass window, she understood the final words of “León” in a new way: “We pause as at the heart of a sun that dazzles and does not burn.”

Santiago de Compostela stole my heart. The old white and stone city is so charming, and the air bursts with the celebratory spirit of pilgrims who have just completed their journey, a spirit that Talbot captures so well in this movement. My favorite moment of the entire piece is in Santiago: “The road climbs before the longed-for final descent to Santiago.” Talbot makes this manages to capture the magic of the moment of arrival after a long journey. While we may not have walked the Camino, performing in Santiago was certainly a moment of arrival for Schola. This was our last concert as the 2017-2018 Yale Schola Cantorum, and for many, it was also their last concert as Yale students. It was immensely meaningful to grow as an ensemble with each performance, and while I’ll certainly miss Santiago, I’ll miss the graduating singers most.

Photo 3: The magnificent stained-glass windows of the Leon Cathedral–the inspiration for the third movement of Path of Miracles (photo by Joseph Kemper)