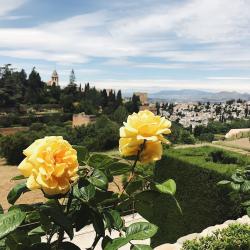 It was a brisk 5:15 a.m. when the cozy crew of seventeen students and faculty assembled in the lobby of our Madrid hotel, gathering our wits about us in the chilly darkness in preparation for the trip “down south.” After ten action-packed (and undeniably chilly) days with the full group in the central and northern cities of Toledo, Lerma, Burgos, and Madrid, the southern regions of Spain had acquired an almost mythic quality. The land of Mediterranean sunshine, the Córdoban corbled arch, and (rumor had it) unrivalled sangría beckoned. As the week progressed, we made our way through Sevilla, Córdoba, and Granada—and as the mythos of each place unfolded before us, the art and architecture tour brought Spain’s scrambled story into the palpable present.

As we made our way through southern Spain with the guidance of faculty and local experts, each city told its own unique story. At the same time, as each monument, church, palace, or convent spoke to us, I gradually learned how to listen—how to read the different surfaces or cityscapes—all the while assembling the intellectual and spiritual tools needed to comprehend the multi-sensual importance of each place. We were surrounded by stories built and inscribed by queens and monks, sultans and tradespeople, architects, bishops, and military captains, unclaimed children and forced converts from untold centuries.

The pinnacle of the tour and perhaps the guiding metaphor of the trip for me was our visit to the Alhambra, the palace of the Nasrid golden age in the thirteenth and fourteenth centuries. Our guide, José Miguel Puerta Vilchez, opened the place to us like the intricate poem that it is: every wall adorned with the lace-like tracery of geometrical patterns, the elegant elaborations of Arabic script, the speaking walls that sequestered murmuring fountains and a profusion of roses. An expert in the inscriptions that deck nearly every portal and room rim, Dr. Puerta Vilchez translated the Alhambra’s multi-layered messages to us. Declarations of the Nasrid motto, “God alone is victor,” visually mingled with glorifications of the sultan’s power and magnanimity toward his subjects. Meanwhile, in verbal rivulets surrounding courtyards and throne rooms, the Alhambra spoke of “herself” as the dazzling bride of the sultan, first person inscriptions commanding her inhabitants to contemplate her beauty. We willingly obliged, ogling our way through corridors and courtyards, the sun catching on dappled muqarnas domes and archways. 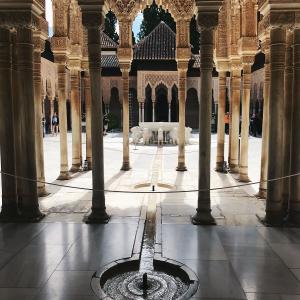 While the inscriptions wove an architectural love story between palace and rulers, between queen and sultan, between humans and God, the structural layout of each room performed its own cosmological narrative. Each room surrounding the famous “Court of the Lions” included small fountains at the center, the soft bubbling mimicking the bride’s stone-worked whisper, the subtle flow of water drawing us from room to room. At eye level, the walls blossomed with script and tracery resembling the gardens of paradise. Finally, as we craned our necks upward, the cosmos itself erupted above our heads in geometric representations of the seven heavens, astral radiance captured in a mystical mathematic.

Our visit culminated with a stroll through the gardens. After the elaborate stonework, the rows of roses, sweet peas, cypresses, and fountains felt like a rest to the eyes, and most of us followed our noses (the yellow roses were voted the winners). At the same time, the wealth of human talent and labor that had birthed the palace so many centuries before changed the way I received and read the gardens. The green leaves claimed their own lace-worked radiance, the pillars of cypress imposed their vertical authority, the starry blues and lush reds patterned in the beds declared the ingenuity of their cosmic creator. The Alhambra taught me how to read not only its walls, but also their inspiration—the works of an almighty Architect.

Looking back over the art and architecture tour, I’ll remember the sunny streets of Sevilla with their tea stalls and flamenco shops, and I’ll recall the introverted and glimmering courtyards of Córdoba. I’ll remember the communities of monks and nuns that welcomed us into their cloisters, the museums of Iberian history, the ancient Roman remains that litter the countryside with the remnants of dining rooms. I’ll remember divisions of cityscapes into Jewish, Muslim, and Christian quarters, the countless battle murals, the relentless remnants of royal insignia, and the propaganda that legitimated the expulsion and erasure of religious and ethnic communities. I’ll definitely remember what a Baroque façade looks like. Our guides, teachers, and the spaces themselves have given me tools to read the past and to sense its presence.

Perhaps even more importantly, I’ll carry with me dear conversations with fellow students, now friends, on subjects ranging from medieval Catholic devotional practice to the innumerable merits of falafel. These friends have taught me new languages for our shared experiences, and, I feel sure, will continue to shape my story.

Photo1: The peerless yellow roses of the Alhambra gardens (photo by Hannah Sachs)

Photo 2: A view of the Alhambra from within the storied “Court of the Lions” (photo by Hannah Sachs)