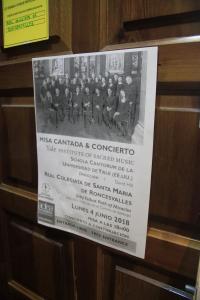 In my 27 years of life, never has a piece of music so viscerally captured my imagination as Joby Talbot’s Path of Miracles. Its epic scope, intense challenge, and profound connection to place and journey immediately captivated the entire ensemble back in October when we first began the rehearsal process. Its four movements describe four major landmarks on the ancient pilgrimage of the Camino Francés, the main northern branch of the Camino de Santiago. The text and music of each movement reflect the composer’s experience of walking the Camino himself; they speak of geography, history, architecture, physical hardship, reflection, and, of course, miracles. Although the subject is historically sacred, the work is secular, speaking to the deep religiosity of medieval pilgrims while remaining open to the spiritual diversity of the modern era.

Our journey began with a sung Mass followed by the first performance of Path of Miracles at the Convento de las Mercedarias de la Purísima Concepción (Convento de “las Góngoras”), a beautiful convent in the heart of Madrid. The church was absolutely packed—some Schola family members included—as we sang a beautiful plainsong service, Tomás Luis de Victoria’s “Dum complerentur” motets, the hauntingly beautiful “O vos omnes” by Pablo Casals, and Palestrina’s energetic setting of “Jubilate Deo.” The convent is home to an order of cloistered nuns, who attended Mass and our concert obscured from the view of the congregation by large, ornate screens. I figured they were present, but didn’t know for sure until after our concert, when ISM director Martin Jean told us that he was able to catch a glimpse of them as Schola processed out at the end of Path of Miracles, many of them with tears flowing down their faces. I hadn’t even thought about the impact our singing might have on these women who have devoted their whole lives to same the pursuit of holiness that Path of Miracles depicts. Of course, we couldn’t speak to them afterwards—but hopefully, the music was able to communicate something profound that in some way gave voice to their experience and faith. What a gift to be able to share this piece with them!

After a long day of travel (including a beautiful but rather harrowing bus ride through the mountains), we arrived in the tiny, rainy, storied town of Roncesvalles—a traditional starting point for many pilgrims undertaking the Camino. People from all over the world ambled around the small, Gothic church (the Real Colegiata de Santa María de Roncesvalles), decked out in brightly colored waterproof clothes, lightweight backpacks, and hiking poles. The chapel was dimly lit and smelled of must and age; as I walked in, I felt energy, austerity, excitement, and mystery. Here, too, we sang a Mass, at the conclusion of which pilgrims assembled at the front as we sang the Salve Regina in darkness. 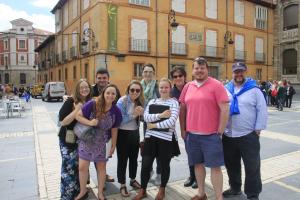 The priest spoke a blessing in at least five languages, perhaps more, to the pilgrims departing on their journey. This charged darkness was palpably electric, and I strongly felt Talbot’s connection to the drama of the place as he depicted it in Path of Miracles. The libretto for the town’s movement uses seven languages, each with its own rhythm and time signature—and I could feel that purposed chaos as people walked in and out of the building, speaking excitedly as they began their journeys. I don’t know how many of the concert attendees knew what they were getting themselves into by staying for our performance, but what a way for those pilgrims to begin the Camino!

The bustling town of Burgos is home to an incredibly ornate, beautiful Gothic cathedral consecrated in 1260 that serves as the focal point for the second movement of Path of Miracles. In typical Gothic style, the massive, ornamented columns, and the pointed arches draw the eye heavenward to the massive octagonal tower located at the crossing; light pours in through high windows, and incredible medieval stonework depicts biblical stories and lives of important saints. Our performance took place in a large chapel at the west end of the building featuring a massive Spanish baroque altarpiece and ornately painted ceilings. The chapel was completely full, and many people pressed their faces to the glass that separated the chapel from the main nave to see what was happening. In the audience were pilgrims from all over the world, including some music students from the United States who had planned their Burgos visit to coincide with our performance!For me, singing in this cathedral was a dream. The acoustics were glorious—always friendly to sopranos—yet the space resonated with more than just our songs. I sensed the stories of so many people who had passed through those doors seeking something transformative and miraculous. I felt history, hardship, doubt, and faith, all embedded in those silent stone walls, and they gave a whole new dimension to the performance.

The first thing I have to mention about León is also the first thing that Talbot depicts in the eponymous movement of Path of Miracles: light. The windows stop you in your tracks when you walk in, effectively bathing the ancient stone in a panorama of colored light. Talbot captures this magic in music with a profundity that I can’t explain in words. In a place like this, you get a sense of the miraculous—not only the miracles associated with religious experience but also the more practical, but still beautiful, miracles of human existence. You look around and marvel that people designed the structure itself with simple arithmetic, sculpted and arranged the stones with hand tools, and created a masterpiece that still stands despite age and circumstances. Although we didn’t perform in the cathedral itself, the sense of magic, light, and wonder stayed with us as we performed in another beautiful church nearby. For my part, it was my favorite performance of the trip—perhaps because the León movement is the beating heart of the piece for me. 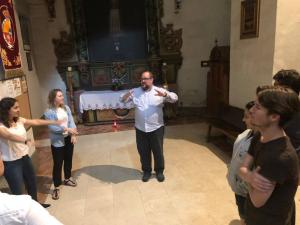 When a choir performs together for the last time, it is an occasion for reflection, for celebration, for sadness, for gratitude—and I cannot think of a more profound place or piece to commemorate music and friendship shared. We arrived at the Monte de Gozo, a peak about five kilometers from the cathedral where pilgrims begin the “longed-for final descent” into the town of Santiago. Many of us walked this final path into town, which felt to me oddly mundane, as Santiago now is a bustling urban center. However, the shared experience of walking in the rain down slippery cobblestones marked with scallop shells was the perfect prelude to our final performance together.

In our free time before the concert, we explored the cathedral—a very dark, pre-Gothic building, complete with massive swinging thurible, relics, and a statue of St. James you can embrace—and the town, where we indulged in local Galician seafood delights and experienced some of the town’s many museums and parks. Our final performance was at the local university church, another gorgeous space that boasted a stunning balcony and altarpiece. Many singers had friends and family in the audience, and we had that one last chance to make the piece our own. I will always remember putting our folders down and processing out together one last time, about to head our separate ways, embracing friends that have become family.

“We have walked out of the lives we had
And will return to nothing, if we live,
Changed by the journey, face and soul alike.”
—Path of Miracles

Photo 1: Schola singers are excited to see flyers for the concert around town in Roncesvalles!