The ISM explores the intersection of sacred music with sacred art, architecture, liturgy, literature, and theology. On the 2018 Study Trip to Spain, we dove into all this and more. The interdisciplinary approach that the ISM cultivates in its students was the heartbeat of the study tour. Throughout the trip, we were encouraged to view each of these elements—art, architecture, liturgy, literature, and theology—in light of the others. This year’s study trip included several liturgies of note, and we were able to experience these liturgies with careful attention to the architectural space in which the liturgies were being conducted, the arts present in these spaces, and the music sung in these liturgies. What is more, we learned to see the sacred architecture, arts, and music as inherent parts of the liturgy. Indeed, the ISM’s focus on sacred art, music, and architecture helps us to see liturgy as fundamentally constituted by much more than written texts. Two of these liturgies stuck me 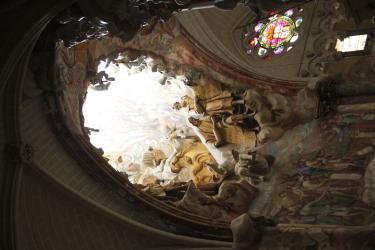 The first of these notable liturgies was a Thursday morning Mass using the Mozarabic Rite at the Cathedral of Toledo. Experiencing this liturgy was truly extraordinary, because the Mozarabic Rite is in use today almost exclusively in the city of Toledo—mainly at the Cathedral (every day, or almost every day), and at perhaps two other parishes in the city of Toledo. Although the Mozarabic Rite (also known as the Visigothic Rite) was the localized rite of the Iberian Peninsula as far back as the seventh century, it was gradually quashed throughout the Middle Ages in favor of the Roman Rite. The sixteenth-century Council of Trent, which essentially standardized the Roman Rite throughout the worldwide Catholic Church, allowed the Mozarabic Rite to remain in use (the Council allowed all rites over 200 years old to remain).

The Mozarabic liturgy that we experienced was almost entirely sung in a body of chant not dissimilar to Gregorian chant, but more syllabic and perhaps more monotonal than the Gregorian repertory. We (at least fifty ISM students and several ISM faculty) were about three minutes late to the Mass, because we were searching for the proper side chapel within the large cathedral! When we entered the side chapel, I was overwhelmed by the antiphonal psalmody that the choir sang behind us as part of the introductory rite. While the liturgy looked in some ways like a pre-Vatican II Roman Rite Mass (for example, in its preface and Sanctus), the collects were spoken in rather (for us) strange places—a chanted amen occurred after every line of the Lord’s Prayer (a particularly wonderful feature), and utterances of Alleluia peppered the chants. While it was a bit confusing to experience an essentially medieval liturgy in a fantastically baroque chapel with painted walls and a priest vested in a Vatican II-style chasuble, we were very aware of our extreme privilege to be able to experience this rare rite. 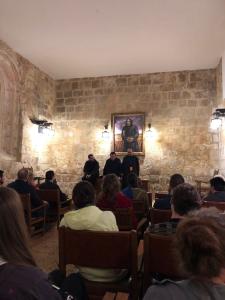 The second liturgy of particular note was a Saturday evening Vespers service at the Monasterio de Santo Domingo in the tiny, gorgeous village of Silos. In the liturgical calendar, this particular service was First Vespers for the Feast of the Most Holy Trinity. The church was absolutely packed—mostly with tourists! The service was almost entirely in Latin, and it was sung almost entirely in medieval Gregorian chant. The organ accompanied virtually the entire liturgy, providing us with a wonderful harmonic soundscape with which to center the entire rite. The music rang out wonderfully in the Romanesque church, which did not contain a single carpet or rug to soak up the sound. I loved watching the monks formally process into the church from the back to begin the service, and then recess down the aisle after the conclusion of the service. The service was solemn, reverent, and absolutely beautiful.

For those of us who enjoy studying liturgical rubrics and texts and who believe in an experiential, observational approach to learning liturgy, the opportunity to feel the rhythms of the Vespers service and the Mozarabic Rite Mass was extremely valuable and helpful from an academic, pedagogical perspective. Exposure to these liturgies helped me to internalize much of what I have learned in my classes. Because of these experiences in Spain, I will continue to seek out experiencing the liturgies that I study, so that I may understand more deeply these ancient liturgies and their effects on the worshiper.

Photo 1: The incredible skylight in the Toledo cathedral above the side chapel where the Mozarabic Rite takes place daily