Spain: a vibrant kaleidoscope of colors, tastes and sounds. For a year before we landed on the tarmac in Madrid, we heard about Spanish history in ISM Colloquium—its kings and queens, its mosaic of cultures and the arts. But nothing prepared us for the first sight of Toledo as we rounded the corner on a winding green mountain road: a stone-colored, Roman, UNESCO-protected skyline sitting high on a mountaintop, with a river twisting far below the walls of the city. 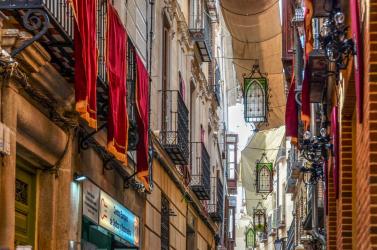 After ascending seven stories of escalators, we discovered we had arrived in Toledo just in time for the feast of Corpus Christi, the largest festival of the year, which included a covered procession through the narrow medieval streets. We were introduced early to the concept of tapas, small plates of local foods that Spaniards eat around the clock. In Spain, you might have an espresso for breakfast, some patata (potato) and olive tapas at 11:00 a.m., a serious lunch at 2:00 p.m., more jamón tapas (Iberian ham) and coffee (or a deep red glass of Rioja) through the afternoon, and finally dinner at 9:00 or 10:00 p.m. It really only took a few days to adjust to this lifestyle, and ordering tapas turns out to be an excellent way to practice Spanish!

As an organist, I was thrilled to dive into the musical and liturgical elements of the trip. Each destination was packed with living history. After a guided tour of Toledo Cathedral, which contains ten different organs and incredible architecture from its founding in 1227, we were able to visit the Chapter of Toledo’s extensive archives, full of documents from as early as the year 1085. Local scholar David Catalunya and ISM fellow Barbara Haggh-Huglo guided us through the collection, which included huge 2x4 foot decorated part-books of liturgical mass settings sung in the cathedral for hundreds of years, incredibly detailed miniature chant collections, and historical ecclesiastical records. I was particularly struck by an intricate hand-drawn design of a processional organ, which could be folded together into a 3D model. This was a bid from an organ builder to build a small but powerful instrument to be carried and played through the streets for magnificent feast days like Corpus Christi in the fifteenth century!

On the road from Toledo to Burgos, we spent a day visiting the small towns of Lerma and Silos. In the Ducal Palace of Lerma, the organists were over the moon to learn that we would get to play our first Spanish organs of the trip. 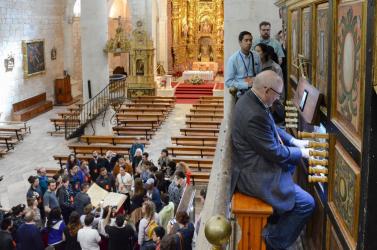 As in most major cathedrals, the sanctuary was constructed with a horseshoe shaped choir in the center of the building, which featured two gilded organs facing each other in the balconies above, one from 1616 and the other from 1617. These instruments were designed to accompany the liturgy and play distinctly Spanish repertoire.They featured hallmarks of Spanish design, such as horizontal trumpets and a keyboard split at middle C, allowing one to play a melody in the right hand and accompany oneself on a completely different set of sounds in the left hand. We quickly established a routine as we traveled: we heard each of the five, ten, or fifty stops on each organ individually first, from sweet flutes to spicy mixtures and brassy trumpets, before trying out different registration combinations. In many ways, playing the organ is like cooking a dish: you have an array of different ingredients that are full of flavor on their own, and the art is in mixing them together to produce a blended chorus – every time you get something slightly different. (It is also worth mentioning that there is a Spanish organ stop called a tapadillo, which may have inspired this particular gastronomic analogy.)

In Silos, we met the Benedictine brothers of Santo Domingo de Silos Abbey and joined them for Vespers. Their dedicated chanting of the Psalms and evening service in Latin filled the cavernous gray chapel. What really struck me was their final procession back to the cloister. I realized as they walked by that all but a few of the brothers, who ranged in age from early 30s to late 70s and 80s, sang entirely from memory. The music and text were impressed in their souls and hearts.

Arriving in Madrid for our second week of the study trip was like time-traveling forward centuries. The cosmopolitan city was filled with wide eighteenth-century boulevards and triumphal arches, fast fashion chains next to royal palaces, and the classic Prado and modern Museo Reina Sofia. We were excited to hear that we would see the Madrid’s cathedral organ. Located across a plaza from the Palacio Real, Almudena Cathedral was completed and consecrated in 1993 by Pope John Paul II. The neo-Gothic stone architecture reflects the design of a traditional cathedral, but the dazzling blue, paprika red, turmeric orange, lime green, and mustard yellow stained glass and modern artistic designs were a brilliant surprise. 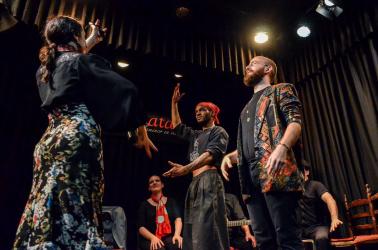 The grand 71-rank organ crowning the back gallery is also modern, built in 1999 by Gerhard Grenzing’s Spanish firm. That evening, we were treated to two hours of uninterrupted open console time after the cathedral closed to visitors for the day. This instrument’s versatility astounded us; its smooth touch enabled us to play everything from classic Spanish music to Bach, from lush French Romantic repertoire to intense twentieth-century improvisation.

Our final days of the full ISM trip included visits to El Escorial, Valle de los Caídos, and a mesmerizing flamenco performance. El Escorial—a granite fortress, historical royal residence, monastery, basilica, choir school and funerary monument for monarchs and emperors—gave us a glimpse of the rich past lives of Spanish kings and queens from the sixteenth century at the height of the Spanish empire. The Valle de los Caídos confronted us with the realities of twentieth-century Spanish history. And the expert precision and passion of the flamenco dancing, improvised singing, and multitude of polyrhythms inspired and captivated us.

Our time in Spain was a whirlwind of tradition and modernity, color and flavor, sound and spectacle, good friends and new surprises—all in all, an incredibly fulfilling experience we won’t soon forget.

Photo 1: The street decorations in preparation of the Festival of Corpus Christi in Toledo

Photo 2: ISM Director Martin Jean plays the seventeenth-century organ in the Collegiate Chapel at Lerma, while the organists wait their turn