The Valle de los Caídos (The Valley of the Fallen) in the Cuelgamuros Valley in Spain constitutes perhaps the most controversial stop on the 2018 ISM trip. In 1940, Francisco Franco chose the valley as the spot to build a large memorial to soldiers killed during the Spanish Civil War. Originally only soldiers who supported the conservative government were buried at the site. The Valley is situated about 50 kilometers northwest of Madrid and most likely appealed to Franco’s vision because of its proximity to the Escorial—the chosen final resting place of many Spanish royals.

However, the Valle de los Caídos is not only a memorial. It is also an active basilica—one of the largest in Europe. Atop this church, a statue of Mary holding a limp and battered Jesus can be seen for miles around. Above the figures towers a large concrete crucifix. The Valley is also home to a Benedictine monastic community that runs a choir school for boys. Parents from across Spain bring their children to audition. If chosen to attend the school, the choir boys sing in the basilica at the foot of Franco’s grave almost every day.

On a very sunny afternoon, students and faculty of the ISM visited the Valle de los Caídos. For almost two weeks, we had been visiting cathedrals, thinking deeply about how art impacts the spiritual and physical resonance of a particular place, and meeting with nuns and monks who kindly shared their stories with us. But for me, the visit to the Valley marked a shift—it was a moment of shared distress. Furthermore, it was a moment of questions because it was also a moment of song. This aspect in itself was interesting because the ISM group had been singing throughout the tour. 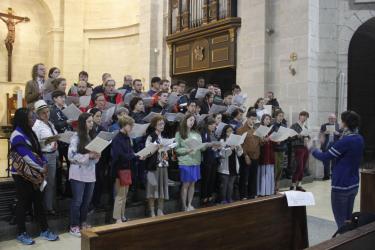 Before our trip to the Valley, we sang as a way to explore the sound and acoustic possibilities of a space. In Madrid we sang to express our gratitude for musicians who prepared a concert for us. In Toledo we sang for cloistered nuns who served delicious marzipan with warm smiles. In Silos we sang for monks who shared their art and their stories with us. We sang and we sang. Until we didn’t—at the Valle de los Caídos. In the Valley, several ISM students and faculty expressed an active desire NOT to sing.

When we arrived, though, we were not only greeted only by a member of the monastic community, but also by the choir boys and their director. We asked the choir boys questions and then they sang for us. They sang the traditional South African folk song “Siyahamba.” They sang and looked into our faces, seeming to ask us what we thought of them. I looked into their eyes and wondered what they thought of us—of us and also of their lives in general. I wondered what it was like to sing at the foot of Franco’s grave every day. I wondered what the Mass meant to them.

That evening after returning to our hotel in Madrid, I felt distressed. I sat on the floor and attempted to hold the memories of the day tenderly and gingerly in my mind. I thought of the moments following the singing. I thought about how we did not sing. What did that mean? That we did not support Franco? That we felt too many mixed emotions to sing? That we were too hurt or surprised or overwhelmed to sing? My ability to form words seemed to have left me, so I opened the window, taking comfort in the sounds of busyness of the city around me.

A few days later in the Museo de Arte Reina Sofia in Madrid, I would again feel the moment of collective silence as together we experienced Guernica, Picasso’s famous discourse with the horrors of war displayed expertly, yet also vulnerably and truthfully, on a canvas.

I often think about the role of music in healing as well as in hurting. I want to say that all music is good and is used for positive ends; however, this is objectively false. Music can and has been used for negative and harmful ends. However, there are more ambiguous instances in which music serves as a mediation point, where it holds memories and ideas too complex or too ambiguous for words.

In light of these observations, I want to suggest that our purpose at the ISM is not only to make and study art that uplifts, although this is certainly an important part of our mission, but also to make and study art that serves as a mediation point. Art is power, in a sense, and is thus enlivened and given purpose by the agency of those who use it. That is why we must think critically about art and about the many roles it now serves in the world. Art both holds meaning and contains meaning within itself – and through the further creativity it awakens.

I am certainly grateful for the opportunities to sing for the monks and nuns and in the beautiful spaces. Furthermore, I have been overwhelmed by the talents of my colleagues who produce gorgeous and deeply meaningful music, words, material arts, and ideas. But what I perhaps most value from the entire trip was the moment in which we walked as one group—in a kind of unified, self-supporting silence—towards a place where we were all scared to go. It was hard for us to be at the Valle de Los Caídos. It was hard to listen to the choir boys sing “Siyahamba.” It was hard to walk into the church, to see the cross, and below to see Franco‘s grave strewn with flowers. In new ways, we questioned songs, the cross, and the church.

It was hard to know whether to sing or not to sing—perhaps we shall continue to ask what we should have done. 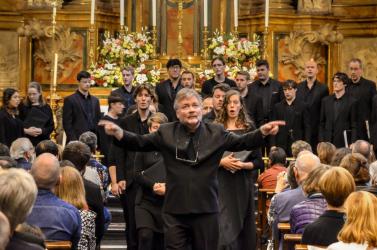 It gives me hope, though, that we indeed did this together. That we asked the questions, and that we are still asking the questions. It gives me hope that we sang later. Our song is forever different—it must be. We know more now; we’ve seen a new kind of hurt. Perhaps a new kind of peace will follow. Of course, Spain was beautiful. We shared so much goodness. But there is something singularly powerful about sharing the challenges too.

And so I ask you now, reader, to think critically. I pose this question to you: Is this part of what it means to love? To go not only into the good places singing, but to share the heart-wrenching silences? To go to the place of hurt? To listen to those who have hurt us, or who represent or endorse those who have hurt us?

Is this what it means to love? To get up the next morning and have breakfast together once again. Forever changed, but choosing to move forward.

Photo 2: Schola conductor David Hill conducts the final notes of Path of Miracles while leading the choir out in procession (Photo by Melanie Ross)