Twenty-one days to wander the unknown streets, enjoy long evenings over tapas, and gaze upon ruminative masterpieces: the 2018 ISM tour to España was a moment for beloved interests and people. Too often sidelined in the flurry of New Haven life, art and friends were paramount on this study trip. For me, it was a time to look and listen actively. We experienced outstanding art, observed stunning objects, and marveled at breathtaking architecture—the memories of which will travel with me back to the States to inspire my research, studio practice, and spirit. Here are just a few vignettes from the trip.

After shaking off our jet lag, we were teased by short-lived Spanish sunshine. Crimson poppies and migrating swallows welcomed us into the European spring. Then, the rain in Spain began to fall. On a wet Toledo morning early in the trip, we took shelter in the Church of Santo Tome before El Greco’s The Burial of the Count of Orgaz.

This work is monumental. El Greco divides the earthy and heavenly realms with variations of his signature brush stokes, recognizable throughout the artist’s oeuvre. Professor Vasileios Marinis guided our eyes through the emotive composition and up towards the crowd of saints and angels among the clouds. “What is this work saying?” he asked us. This question evoked various responses from the student artists, musicians, theologians, and historians. We each responded with a perspective on the painting’s significance from our discipline and physical point of view. The opportunity to sit before this tour de force with these generative thinkers and makers was incredible.

Over a week into our journey, we made our way to Madrid. A free day allowed some to rest, while others were irresistibly drawn into the Prado for a second visit. When we reunited once again, the group considered the travesty of Spanish history under Franco. In the country’s capital, we discovered the Museo de América. This less-traversed tourist destination holds a collection of objects seized from the Americas, including pre-conquest material culture from civilizations in North, Central, and South America, in addition to later items produced under Iberian colonization. Initially a personal royal collection, the museum was envisioned under the Republican government, but realized under the Franco regime. 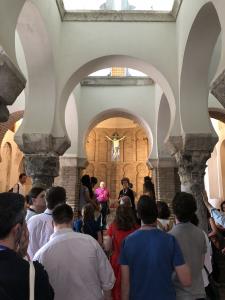 Inside the museum, an amalgamation of objects from disparate lands and times are displayed together in an attempt to link the cultures of the Spanish empire thematically. Emily Floyd (M.A.R. ’12) highlighted the Codex Tudela of the Mexica people (also known as the Aztecs) and a series of Casta paintings, which explain combinations of racial mixture and status in colonial Mexico. Within a cohort of North Americans, I was reminded how rarely these objects from the Americas are shown in Europe (or anywhere), and I left considering the ethics of cultural heritage. Simultaneously, I contemplated how the fascist government hoped to position the story of the conquest, and what political and educational goals were at stake. How do we decolonize the self, the narrative, or the museum? Needless to say, these questions extend far beyond the coasts of contemporary Spain.

When the ISM disbanded into smaller study trips, the arts and architecture students visited Andalucía. We spilled into warm and hilly olive orchards, took picturesque drives, and sampled perfect dishes. The beauty of this place is also coupled with violence. Like the Museo de América, Sevilla is a lasting testament to colonial conquest, with its riverfront ports that witnessed the transfer of an agglomeration of bodies, texts, canvases, and foods. The south was also home to the Muslim population until 1492, the fateful year of expulsion and forced conversions (these Muslims living under Christian rule were known as moriscos). The soil of this region retells a tale of overpowering “others” through the arts. In Andalucía, some Islamic architecture was demolished, while other edifices were adapted or interpolated under Christian rule. Esteemed structures were maintained or emulated (often by morisco artisans) for centuries.

Throughout the trip, Professor Luly Feliciano and her circle of expert colleagues led us through this challenging history. This was especially true on our journey through the Alhambra of Granada with Professor José Miguel Puerta Vilchez. He aided our meditation as he translated the Arabic poetry, which quite literally brought the building to life. An external entryway proclaimed, “I am the crown on the forehead of the door.… Once victory appears, I will open.” This speech enlivened the already mesmerizing façade, which bore remnants of polychrome on the detailed stucco cutouts. I was taken by the glistering lusterware tiles, the balmy and buttery florals, and the trickling conduits from the Sierra Nevadas. Enchanted by this intimate architecture, we skipped our coffee break and even requested to push back our lunch so that we could remain in the captivating Alhambra, following its circuitous garden paths.

Of course, the study trip was so much more than these inspiring buildings, materials, and works of art. In a group of eighty very different people, I am thankful for the friends who wandered with me and made Spain so memorable. I am grateful for the hotel breakfasts, bus rides, shopping sprees, vegan churros, darts, hikes, and chats with so many members of the ISM. And I am eager to recreate Spanish dishes and relive these memories with my fellow wanderers back in New Haven.

Photo 1: After a meaningful conversation with the brothers at the monastery of Silos, ISM students and faculty venture out into the rain once more (Photo by Melanie Ross)