This sentiment is pressed upon us in genteel English accents at each concert venue we visit. During our first rehearsal at Winchester Cathedral, we singers of Schola Cantorum are informed that the heart of the building we’re in dates back to 1079 and that Jane Austen’s final resting place can be found in the North Aisle. One week later, we solemnly process into evensong at Westminster Abbey over the bones of Isaac Newton and Charles Darwin, the dean reminding us that we are participating in an almost unbroken tradition of worship dating back hundreds of years. Later on, at a reception in the Jerusalem Chamber at the Abbey, we learn that we are nibbling canapés and drinking wine in the room where Henry IV breathed his last.

It is easy for me to imagine sharing these spaces with those who have come before us. I can picture Jane pacing between the chairs as she listens to our rehearsal, turning her head to listen as our conductor David Hill tunes chords that lost their brilliance on the overnight flight from New York to London. If we sing a hymn she knew well from her time at the cathedral, perhaps Jane would sing along. I can see Newton flouting all propriety during evensong, crouching over his notebook in the wooden choir stalls rather than paying any attention to those of us singing Mary’s humble words of devotion from the Magnificat. As for King Henry? He helps himself to a glass of wine and drops down in a chair in the corner, silently watching the crowd mingle around him. It is almost as though Jane, Isaac, and Henry are part of our community of traveling musicians simply because they preceded us in these aging English churches. What defines a community, after all? Wendell Berry argues that “a community is not merely a condition of physical proximity…[but] the mental and spiritual condition of knowing that the place is shared.”

For this year’s tour, Schola performed at evensong worship services as well as the traditional concert program. All of our evensong services, except the one at Westminster, were joint ventures with the regular chapel singers. Schola was repeatedly  grafted on to a different choir for a few hours, invited into the unique traditions of each chapel, as together we all shared our musical gifts with those in the pews attending the services. Although choral evensong typically lasts half the length of a concert, there is little vocal rest due to the sheer amount of music in each: four-part psalm chanting, choral settings of the biblical Magnificat and Nunc dimittis texts, and an extended religious anthem. 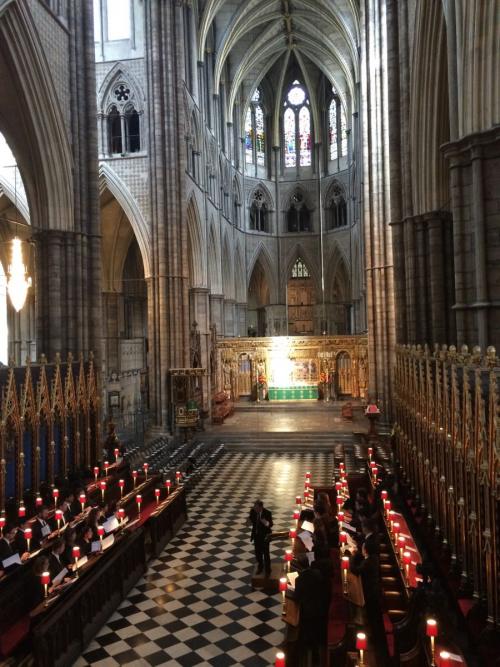 If a building tugs my imagination in one direction, words pull it in another. The Victorian art critic John Ruskin writes (in his extended essay The Seven Lamps of Architecture) of Poetry and Architecture as the “two strong conquerors of the forgetfulness,” a notion I find myself agreeing with. If being in an old church connects me to Jane Austen or Henry of Bolingbroke, singing the Mass and the Divine Office connects me to all those who have ever sung those words.

I think of Beethoven, toiling two hundred years ago to impress the prince who had commissioned this new mass. I think of Palestrina, composing mass after mass for worship at the Julian Chapel at St. Peter’s Basilica in Rome. Of the singers who century after century gave their voices and bodies to words pleading for mercy in the Kyrie, praising God in the Gloria, and proclaiming belief in the Credo.

The words of the Divine Office and the Mass are old.

Even older than Westminster Abbey.

Valerie Rogotzke is a Ph.D. student in musicology at Yale.