I have been a singer in the ISM’s Voxtet for the past two years. This program focuses on early music, art song,  and sacred music, though many of us also sing opera. Sacred music transports the performer and the listener into another realm of reality, the heavenly plane of existence. 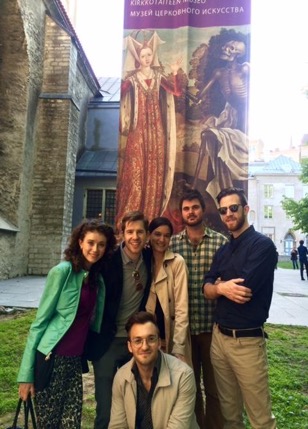 Our study trip to the Baltics started in Tallinn, Estonia where we heard an amazing Estonian group called Vox Clamantis give a concert of sacred music. A familiar Christian chant opened the program, exquisitely soft and nuanced, and paired with incredibly precise intonation throughout the performance. This night was an introduction to the power of music to communicate the celestial, and a highlight of the time we spent in Estonia.

As our tour progressed, we visited Orthodox and Lutheran churches in Tallinn, Helsinki, and Saint Petersburg and heard presentations by people who worked at each church or knew a lot of history about each space. We attended a few Orthodox services in which music was a key component. Orthodox services also require the participants to stand throughout the service, and I marveled at the older women who were able to stand for a “short” 90-minute Vespers service, kissing icons, bowing with reverence every few minutes, and crossing themselves frequently. This was a reminder that music and art are never created in a bubble but are informed by history, belief/religion, politics, and culture. All of these things are wrapped up into each other and it takes time, patience, and curiosity to see and understand the connections.

Architecture is part of the constellation of components that make up the experience of the sacred. Tallinn was quaint and charming in character, but Saint Petersburg was a massive, architectural wonder. In this Russian city we experienced St. Isaac’s Cathedral, colorful mosaics in the Church of the Spilled Blood, and most noticeably an abundance of gold in and on each church and national building. The style of singing, too, resembles this uniquely ornate, grander aesthetic, offering its own flavor of delight and comfort to the listener. We walked into Kazaan Cathedral as a service was taking place—a complex musical dialogue between the priest and the choir resonated with the open, ornate, gold-adorned space to transport the listener to a different world.

Another particularly memorable example of Russian singing was a short, impromptu performance by a group of five or six men at the Fortress of St. Peter and Paul. As singers working for the Russian Orthodox Church, they asked us to not record, photograph, or applaud, out of reverence. After the leader (a marvelous bass) showed off his three-octave range in wonderful a cappella number, as the audience murmured its approbation he confidently proclaimed with a heavy accent, “This is why in  Russian Church we do not need organ.” (He was right.) We also heard four voice students and an instructor from the University of Saint Petersburg give a lecture/concert on Russian chant dating back to the 9th century. Instead of singing in unison in the compact, Gregorian chant style to which we are accustomed, they demonstrated a progression of Russian chant of individual melodic lines combining contrapuntally in a voice-leading maze, leading to incredible dissonances and expansive polychord endings. 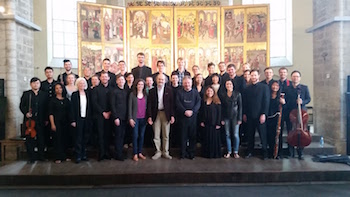 Following the study tour, Yale Schola Cantorum sang three concerts of Arvo Pärt’s Passio, which tells the Passion story from the gospel of John. The piece itself, composed in Part’s signature minimalist style, masterfully uses harmonic tension to create wonder, reflection, anger, dismay, and hope. A highlight for me was singing this for the composer himself and seeing how happy and gracious he was to the performers during the rehearsal, before the performance, and afterwards.

For the Voxtet excursion, music was the main object of our journey. We traveled to Munich, Germany to visit our teacher’s old stomping grounds and sang in several churches and chapels. A particular piece we sang sticks with me: Orlando di Lassus’s “In monte Oliveti” which describes Jesus’s prayer and agony on the Mount of Olives just before Judas’s betrayal. 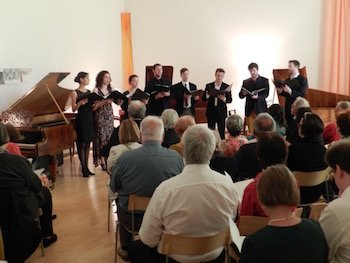 Even though it is a singer’s tendency to focus on the imperfection of any performance, I know that singing in these sacred spaces touched everyone who listened, as was evident by the responses of our audiences. In addition to enjoying the famous Hofbräuhaus, the Voxtet also put on a Liederabend with fortepianist Christoph Hammer. Singing lieder accompanied by the same instruments Schubert, Mozart, and Beethoven would have played on was a real treat and enriched my understanding of singing.

After almost a month on the road, what can I say about the ISM Study Tour? I am beyond amazed at the experience of visiting these places and experiencing a slice of the vast culture associated with each country. Incredible music, countless masterworks of art, and architectural wonders all flood my mind and soul. It is music that brought me to Yale, but this trip helped me to understand that music is simply one of the beautiful threads that make up the fabric of the sacred.