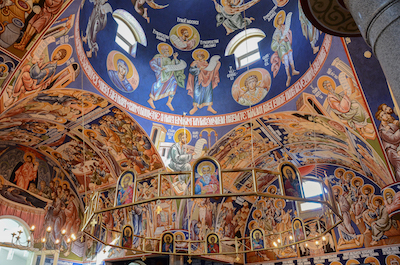 A fascination with the historical seems to be a common trait in organists. Yet we often only focus on the mechanical curiosity of the instrument itself, which has undergone dizzying evolution in the centuries since its invention. Accordingly, organs are kaleidoscopically varied in the sound-worlds they create. In the pursuit of the sound-worlds that we organists love—and want our listeners to love—we cannot help but get bogged down in pipe scales, temperaments, this flute stop or that flute stop. But from time to time, it’s important to step back from minutiae and think about the contexts and larger histories of the instruments we know and love. For me, studying at the ISM, and especially this year’s study tour to the Baltics, encouraged me to consider this wider perspective. The best moments of my first year at Yale felt like an electrical surge in my brain, where a poem from this course suddenly connects to a new definition of “the voice” in that course, and then to a lecturer’s ideas on icons during the ISM Colloquium, and then to a perplexing section of organ music in the practice room. And the study trip, too, was ripe with these moments, as I trekked between Tallinn’s different cathedrals, or went from a talk by a Russian Orthodox priest to a conversation with undergraduates at a Russian university. 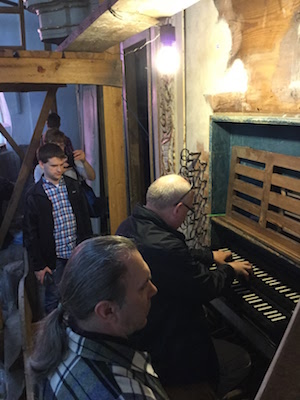 One connection in particular that struck me on the study tour was that all manner of sacred buildings and objects persisted through the Soviet occupation of Estonia, Latvia, and Lithuania, as if they’d actually been hidden in plain sight. Some churches survived only as shells – the Feodorovskaya Cathedral in Saint Petersburg was gutted and pierced with ducts and lines to function as a milk processing plant, and the Cathedral of Simeon and Hanna in Tallinn was used as a sports hall, its tower removed. But the sacredness of these buildings remained, somehow, and after the Soviet Era these places were not only restored, but made more beautiful than before. One could more appropriately say, then, that the core of these churches survived, not just an empty shell. A sacred core, hidden behind the mask of a milk plant or sports hall. For example, the 1776 Casparini organ, in the Church of the Holy Spirit in Vilnius, is also a core, with only five ranks of pipes currently installed and playable. The many remaining pipes are stacked on shelves in a back room, following a collaborative project that resulted in a reproduction of the instrument being built at the Eastman School of Music. Back in Vilnius, the slow, expensive process of renovating the case and mechanism plods on for years. But that core of pipes is extraordinarily beautiful. We organ students spent a surprisingly long time enjoying the sounds of just these few, basic ranks, which might only be thought of as part of the principal chorus on a less-distinguished instrument. I feel certain that, as with the churches, the Casparini’s core will continue to inspire the restoration of the entire instrument. 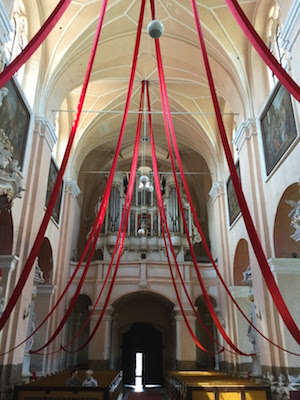 With images of drab neo-Classical and Brutalist Soviet architecture looming in my mind, I had also not expected to see so many old and beautifully ornate churches on our trip. It seems as though each church has its own complex story for having survived the Soviet occupations, sometimes just the dumb luck of not being seized by the government for another purpose. The Lutheran St. Mary’s Cathedral in Tallinn is the oldest church in mainland Estonia and still has its 17th century pews, pulpit, and altar. The Church of the Holy Spirit in Vilnius—where the Casparini organ lives—has an unbelievable mid-18th century Baroque interior, with wild feathers and branches formed of wood and plaster. In Tytuvėnai, a small town between Vilnius and Riga, the organist sub-group (eight ISM organ students and Prof. Martin Jean) were fortunate to spend a generous amount of time in the 17th-century Church of Our Lady of the Angels, part of a Bernardine monastery. Here was another church with an incredible interior that has survived many social and political upheavals, and its beautiful 1789 organ survived them as well. The organ was built by a Lithuanian, Nicolaus Jantzon, and gave us an opportunity to experience a much fuller late 18th-century sound-world than that of the Casparini. Because the organ lacks a pedal board, we played several pieces with a second person supplying the pedal line, a tricky bit of fun.

It wasn’t just the sound of the Tytuvėnai organ that was beautiful, but the whole of it: the peeling stop labels, the wooden statue of David and his lyre with a few broken strings, the hand-copied part books for the Mass stacked behind the organ case. It was a counterpoint to museums and alarmed glass cases, multi-lingual pamphlets and tour guides. Those things have their sacred qualities; we make a pilgrimage to see great works of art (and we all did, at the Hermitage), and we stand in the crowd and look to connect. But on this trip, it was a blessing to find the sacred cores and sacred wholes that have truly weathered storms of all descriptions.