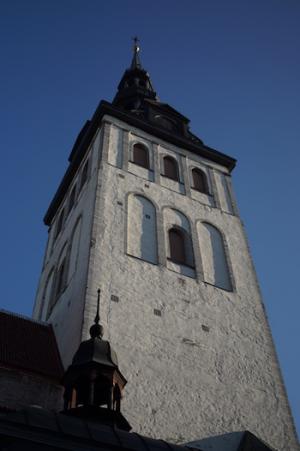 I thought I was going to hate everyone.

That’s generally the way it goes when you go on a large group trip: lots of people with varied personalities, stuck together for two weeks of highly structured, nay, exhausting travel. But this study tour was different. Our group’s “stuck-togetherness” ebbed and flowed as the sights seen and sounds heard continued to refresh and inspire us all. For performances and presentations we gathered as one mass, absorbing and learning from our ever-changing Baltic environment. But we also had many opportunities to explore freely on our own. Together, this variety made for a very successful trip, allowing for many sublime encounters.

One of the most celestial of these encounters took place through the dense soporific fog of jet lag on the first night. Inside Tallinn’s world-famous 13th-century St. Nicholas’ Church we sat together in old wooden pews, awaiting Vox Clamantis. At the front end of the nave stood a forest of microphones and recording equipment. The concert would be broadcast live over Estonian public radio. Despite the modern technology, we were still enveloped by an otherwise medieval space. Unlike the elaborate massive cathedrals seen elsewhere throughout Europe, this church was modest and simple. Roughly cut blocks of stone and white paint towered above us. Before us, at the apse, stood a stunning gilt 15th-century high altar, open wide to share in elaborate detail grotesque martyrdoms. As one interested most in the visual arts, I had the urge to get up and take a closer look, to study the intricacies of each panel and discern a larger narrative. But the microphones and the soon-to-begin performance held me in my seat. We didn’t wait long. Soon, angelic soprano and alto voices softly pierced through the audience’s quiet murmuring. The sound of singing began to grow steadily louder and discernibly closer. Up both side aisles slowly marched Vox Clamantis, pouring out their arresting choral harmonies as they arrived at the spot where the transept meets the nave. The following hour felt like a dream, and not only because the whole of the ISM was constantly a knife’s edge away from sleep. Vox Clamantis’s performance was nothing short of soul-grabbing. 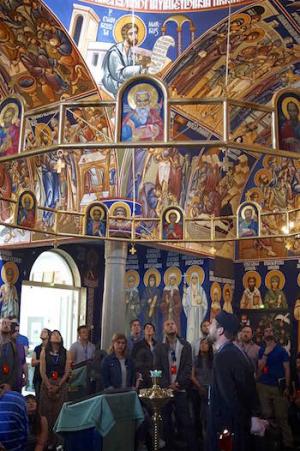 Our tour of churches around the Finnish town of Espoo outside Helsinki, proved to be another stunning encounter for our group. We began our morning at what appeared from the outside to be a humble Orthodox chapel. This belied its contents. Immediately upon entering the church, we were greeted with an overwhelming visual cacophony. Boisterously colored icons filled every square inch of the small church’s walls. A close friend of mine came up to me to say with beautiful frustration, “I don’t know how to take a picture of this!” Of course, it was impossible to capture the image-laden walls sufficiently, let alone the feeling of being overwhelmed by so many color-rich depictions. Walking under and around these images seemed like pacing within a sacred comic book. The church was designed by Father Paul Hesse and dedicated to St. Herman of Alaska, a saint I had never heard of, but one nevertheless important to the complex story of Russian Orthodoxy’s spread.

A mere ten-minute walk away from St. Herman’s stood Tapiola Church, a structure that appeared to be the polar opposite: a bit larger, and Lutheran, but more importantly, an exemplar of early Finnish Modernism. Tapiola is box-like, vast, and constructed of simple and obvious materials of somber earth-tones. This church felt nothing like the last, and the contrast was delicious. Architect Aaron Ruusuvuori’s design reminded me immediately of another more familiar building: the Yale University Art Gallery’s Louis Kahn building. Of course, this made sense. Louis Kahn’s building is Modernist, filled with angular geometry, and composed of natural and obvious materials. Not least, Kahn himself was born in Estonia. 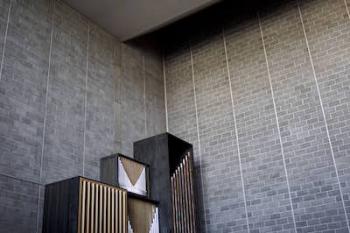 Such dramatic shifts in our encounters became emblematic of the trip. But perhaps the best shifting was the regular move between structured group events and time for individual exploration. This made for a more holistically complete study tour, allowing us space to thrive and enjoy learning as we do best. For me, this became most apparent in my own exploration of Helsinki’s Kiasma, the city’s home museum for contemporary art. We all had the option of visiting the site with a small group on a guided tour. I opted instead for a solo visit, and it was well worth it. The museum was small; in an hour and a half, I was able to see virtually everything I hoped to see. The works on view were fun, interesting, engaging, playful, and meaningful––created by a slew of artists from Finland and beyond. Ernesto Neto’s and Choi Jeong Hwa’s respective exhibitions were particularly enjoyable in their invitation for interaction. By exploring on my own, I felt refreshed and energized. 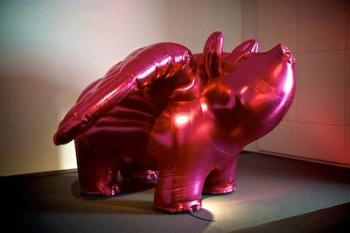 ll of these experiences, and many others not mentioned here, made for a remarkable study tour—one that left me pining for a quick return.

And as you may have guessed, I left not hating everyone.