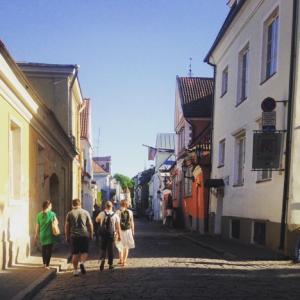 Just before we left for the Baltics, I joked that the only Estonian, Finnish, Russian, and Latvian words I needed to learn were “coffee” and “thanks.” Even after a year of preparation, the region felt so foreign to me that I planned to cling to what I knew was universal—coffee (kohv/kahvi/кофе/kafija) and gratitude for it. Though I expected to find beauty in Baltic choirs, Finnish forests, church grandeur, and wonderful classmates, I realize now that our journey was defined, for me, by the many unexpected moments of beauty and the unbridled joy they brought.

There was something absolutely trance-like about stumbling off the plane, off the bus, into and out of the hotel, and onto the cobblestone streets of one of the most idyllic cities any of us had seen. The vibrant color palette, preserved medieval towers and churches, and blooming foliage of Tallinn Old Town were only amplified by warm sunshine and a perfect blue sky. Despite our sleepless delirium, we were in love. Within minutes we found kohv, ice cream (the other universal), very large pancakes, and pickled herring.

Even before the Vox Clamantis concert that night, Tallinn felt like home. This sensation grew stronger over the next four days as we spent our free time wandering through Old Town—unintentionally retracing our steps over and over again—and basking in its loveliness. 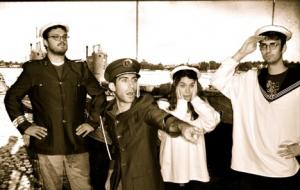 Our first major excursion outside of Old Town was to Seaplane Harbour, a museum right on the Baltic Sea. Submarines, flight simulators, remote-control boats, and costumes transformed us into giddy schoolchildren as we immersed ourselves in maritime magic.

As if the exuberance of Seaplane Harbour weren’t beautiful enough, we then found a tiny restaurant in the middle of a residential area where we were shown immense kindness and fed a tomato soup so delicious that it bordered on divine. The simplest lunch reminded us of the power of food to become a physical manifestation of hospitality and comfort.

Our hearts ached as we left Tallinn for Helsinki, but awe quickly supplanted grief when we filed onto the colossal boat. I’ll never forget feeling the spray of the Baltic Sea while standing on the deck of a ferry the size of a cruise ship. Throughout our Baltic voyage, I couldn’t help but marvel at the effects of being on or near water at all times; a calm happiness washed over us as we succumbed to the majesty of the sea. 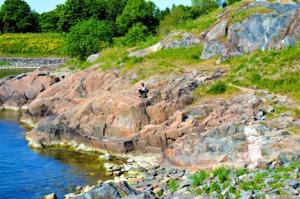 While in Finland we continued to revel in nature, finding our own sanctuaries in forests, on islands, and on sunny benches by the harbor. The woods and lakes of Haltia nature center and the cliffs and greenness of the island fortress of Suomenlinna left me blissfully breathless, frolicking through meadows of tall grass and tiny flowers.

Though many of us expected to love the tour’s nature days, I’m not sure any of us expected to find such community with each other in the saunas. We’d giggled all year about the prospect of sitting in the steam with classmates we hardly knew, about the sport of “Competitive Sauna,” and about the possibility of a professor walking in (which was quickly quelled by Martin Jean’s declaration of “student-only saunas”). One of my fondest memories of the tour, though, is of the tiny sauna at Haltia filled with nearly 20 classmates in swimsuits squished against each other, laughing and bonding over our collective sweat and euphoric discomfort.

It’s curious that the choral conductor has hardly mentioned the slew of choral music heard on this journey. Though all the ensembles we heard in concerts, lectures, and church services were fabulous and fantastically interesting, my favorite performance of the tour was a complete surprise. After waiting in line for nearly an hour, we walked into the Hermitage in our tour groups, fighting through thick crowds to catch a glimpse of its treasures. We made our way into a huge open room, meant to be more of a passageway than an attraction in itself. Within a few seconds, four male voices began to sing together, their depth and warmth surrounding us, chilling our spines, and bringing tears to our eyes. Theirs was one of the most incredible sounds I have ever heard. 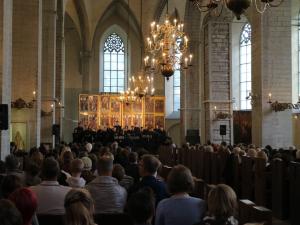 With the arrival of the non-ISM Schola singers at the closing dinner, study tour transformed into performance tour. One of the Seto singers told us in Estonia: “Our goal is not to go from one stage to another, but just to enjoy.” I had been so struck by their sense of community and the integrity of their mission, and this quote stuck with me for the entirety of Schola tour. With the Seto women in mind, I allowed myself to enjoy all my last moments singing and being with people who have become my family these past two years: the feeling of a huge choral breath before an important entrance, the cathartic Amen at the end of the Pärt Passio, the face David Hill makes when we’re out of tune, communal meals, nights spent piled into a hotel room bed watching television together, the hilarity(!) of a 2:30 am departure time on a performance day, Arvo Pärt blowing Nola Richardson a kiss at our soundcheck in Estonia as he heard her sing solo for the first time, dancing in Latvia, and tearful goodbyes.  Kristel Üksvärav

I left Riga feeling full, changed, excited, grateful, and already homesick for the overwhelming Baltic beauty that captivated me from my first moments in Tallinn. The next Estonian Song Festival is in 2019… see you there!