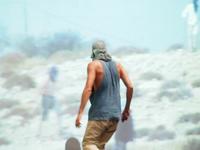 The artist’s related installation Capture Practice will be on view at the Off Broadway Theater Thursday, March 5 - Saturday, March 7.

The dancer and choreographer Arkadi Zaides presents his new work, Archive, based on video filmed by volunteers of the B’tselem Camera Project. B’Tselem, the Israeli Information Center for Human Rights in the Occupied Territories, distributes cameras to Palestinians living in high-conflict areas. Participants document human rights violations and expose the reality of life under the occupation. Through his appropriation of gestures and voices, Zaides engages with the materials and embodies them, turning his body into a living archive.

B’Tselem is The Israeli Information Center for Human Rights in the Occupied Territories. In 2007
the organization initiated a project, in which video cameras are distributed to Palestinians living in
high-conflict areas. The project aims to provide an ongoing documentation of human rights
violations and to expose the reality of life under occupation to both the Israeli and international
public.

In his new work Arkadi Zaides deepens his artistic exploration of the ongoing conflict in
Israel/Palestine. Materials filmed by volunteers of the B’Tselem Camera Project are selected and
reviewed. Zaides brings the viewers’ attention to the bodies of Israelis (settlers and soldiers), as
they have been depicted on camera, and to the physical reactions to which they resort in various
confrontational situations. The Palestinians remain behind the camera. Nevertheless, their
movement, voice and point of view are highly present, determining the spectator’s perspective.

Although the materials filmed by the photographers reveal the local reality, Zaides wishes to
discuss a broader, more universal question: what is the potential for violence embedded in each
individual body and what price does the collective pay for controlling the other. Zaides extracts and
appropriates gestures and voices, he engages and identifies with the materials, gradually
embodying them. Questions of participation and responsibility are opened as his body transforms
into a living archive.

The project’s concept was developed during Zaides’ studies at the Amsterdam Master of
Choreography program at the Theater School (NL). For this project he has received a prize from
The Emile Zola Chair for Human Rights (IL). Our utmost gratitude to the B’Tselem team for their
important work and contribution to the piece.