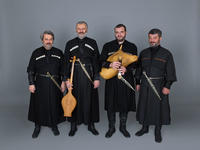 The Anchiskhati Choir, renowned for their instrumental role in reviving the forgotten tradition of Georgian three-voiced traditional liturgical chant, will perform a selection from their latest project, “The Orthodox Paschal Cycle.” The singers expertly negotiate the complex polyphonic forms of these familiar Paschal texts, their voices precisely tuned to the unique other-worldly harmonies and intonation styles of this important medieval repertory. Inherited through oral transmission, this music was only notated at the turn of the last century, but those transcriptions remained locked in Soviet archives until Anchiskhati members gained access in 1988.

In addition to the central focus on chants from Holy Week and Pascha, the performance will include para-liturgical folk songs accompanied by traditional instruments such as the goatskin bagpipe (chiboni) and a four-string lute (chonguri).

The singers of the Anchiskhati Church Choir of Tbilisi, Georgia are the undisputed leaders of the widespread contemporary revival of a lost three-voice traditional form of Georgian Orthodox chant, as well as some of the leading scholars of the history and theory of this globally significant medieval repertory.