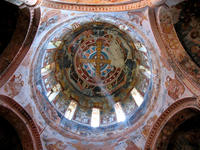 The Revival of Art and Religion in the Caucasus

precedes the performance of the Anchiskhati Church Choir

Join us for a Symposium sponsored by the Yale Institute of Sacred Music, organized by ISM Fellow John A. Graham.

The history of the Orthodox religion in Georgia spans more than 1600 years. During this period its longstanding cultural arts have become synonymous with Georgian cultural identity. In times of political invasion, the symbols of power and prestige of the Orthodox faith (cathedrals, seminaries, icons, frescoes, clergy) have been the subject of targeted attack. In times of renewal, conversely, these artifacts are the first to be rebuilt, these spaces the first to be re-inhabited. In recent centuries, this cycle has repeated three times. A large scale revival of Church institutions at the end of Persian domination in the eighteenth century was swiftly quelled in 1811 when the Russian Empire abolished the independence of the Church, closing its seminaries and exiling the Patriarch. Nearly a century later, the Church reasserted its independence in 1917 only to have its hopes dismantled by the Bolshevik Revolution of 1921 and first purge of 1924 in which thousands were killed. In the Post-Soviet space, the Georgian Orthodox Church once again leads a massive cultural revival, this time with new challenges. Globalized young people question the Church’s conservative social positions, while politicians vie for its majority social clout in a country where 85% of the population identifies as Orthodox Christian. Traditional narratives are being tested as new European Union mandates require greater institutional tolerance for Muslim, Armenian Gregorian, and Yasidi religious minority faiths. In this symposium, we are interested in the role of Art as a means to renew Orthopraxis (correct practice), as a means to re-imagine past identities, and in some cases as a means to assert cultural ownership over past political and religious spaces. These spaces include the physical rebuilding of churches and monasteries, the acoustic re-imagining of the performed liturgy through chant, re-establishing a spiritual-intellectual relationship with the lives of Georgian Orthodox saints, and increasingly, navigating political-cultural public spaces to guide a nation, and faith, in transition.

The symposium will feature members of the critically acclaimed Anchiskhati Church Choir (Tbilisi, Georgia), and lectures by a range of unique speakers including an Orthodox monk, a church historian, an art historian, and the Georgian archivist at the Library of Congress.