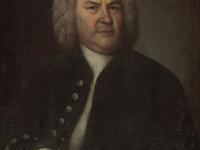 Presented in conjunction with the American Bach Society Conference and Back to Back Bach. Info about the April 27 performance of the St. John Passion.

Soloists (all alumni of the ISM and Yale School of Music)

In 1733, Johann Sebastian Bach (1685–1750), then cantor at St. Thomas’s in Leipzig, dispatched a small package to the electoral court in Dresden. In his accompanying letter to the Elector of Saxony, Friedrich August II, he wrote:

To Your Royal Highness I submit in deepest devotion the present small work of the science which I have achieved in music, with the most wholly submissive prayer that Your Highness will look upon it with Most Gracious Eyes, according to Your Highness’s World-Famous Clemency and not according to the poor composition; and thus deign to take me under Your Most Mighty Protection.

Bach was seeking to gain the title of Hofcompositeur (court composer) at the electoral court. His application was not immediately successful, and it was not until 1736 that the court finally awarded him the title. The music to which he referred in the letter comprised the first two parts of what we know today as the Mass in B Minor: the Kyrie and the Gloria. The music Bach presented in these Mass settings was not entirely new. The Kyrie and Gloria contained musical material from earlier cantatas that Bach had composed in the 1720s for his duties as cantor at St. Thomas Church in Leipzig, with the Latin text of the Mass superimposed over the original words. (This form of musical recycling is called “parody” and was used by Bach in a similar way in his Christmas Oratorio.) The selection Bach sent to Dresden clearly shows that he picked movements that represented some of his best works in his career as a composer and which, at the same time, perfectly fit the affective qualities of the new Latin text. Bach was familiar with the style of Mass composition that was popular in Dresden at this time, and he chose and composed movements that fit the stylistic preferences of the court. He used, for example, a five-part choir, which was unusual in his own compositions but common in Dresden Masses, and composed several movements in the old stile antico, a polyphonic style rooted in the music of the sixteenth century and popular in some of the Masses at the Dresden court.

Shortly before his death in 1750 Bach organized and reviewed his own oeuvre. Two large projects in particular occupied his time: the preparation for print of his magnum opus, the Art of Fugue, and the completion of the Mass in B Minor. These two projects represent a culmination of his work as a composer of polyphonic instrumental and vocal music. We do not have evidence of external reasons for his renewed interest in the Mass in B Minor (unlike the Dresden application, which was clearly the impetus for the composition of its first two parts). We must assume that Bach hoped to complete the Mass as a summary of his own accomplishments, and this prompted him to finish the cycle by adding the remaining Credo, Sanctus, and Agnus Dei movements. As in the earlier Kyrie and Gloria sections, most of the new movements parodied older works, which he reworked to fit the Latin text of the Mass. Bach also integrated a short Sanctus, which he had composed in 1725.

Despite the disjointed periods of composition of the Mass in B Minor, it is important to keep in mind that the whole is greater than the sum of its parts. The Mass in B Minor is not merely a compilation of “Bach’s Greatest Hits.” On the contrary, Bach was eager to combine the movements in a way that bridged gaps between the old and the new. One important feature in this process involved reworking each part to conform to a specific architectural plan for the Mass. We have to keep in mind that music and architecture of the Baroque period were allied philosophically. A basic principle of Baroque architecture was the necessity for a symmetrical ground-plan. The royal palace of Versailles in France served as a model for many other buildings in this respect: its main building, which itself is axial-symmetric, is a centerpiece framed by two huge side wings. The European nobility were eager to imitate both the architecture of the palace and the social structures it embodied. Thus, the palace served not only as an architectural paradigm, but as an emanation of the structure of Baroque society. Several residences in Germany were built (or rebuilt) according to this model, albeit on a much smaller scale.

Bach clearly designed each of the first three parts of the Mass in B Minor (Kyrie, Gloria, and Credo) according to such a symmetric ground-plan, with two majestic wings and a clear centerpiece around which all the other movements revolve. The first example is the Kyrie. Its middle section, the “Christe eleison” (Christ, have mercy) is framed by two huge movements for choir and orchestra that present the supplication “Kyrie eleison” (Lord, have mercy) in a polyphonic fabric. The first “Kyrie” opens with a solemn slow introduction that both serves as an overture and also alludes to some of the musical ideas about to follow. This opening leads to a polyphonic “Kyrie”in which the theme is first played by the orchestra and then gradually taken over by the voices of the choir in a majestic crescendo. The following “Christe” serves as a contrast. Bach set these words as a duet for two sopranos in an arrangement quite similar to the love duets found in Italian operas or in Bach’s own secular compositions. In this shift from strict counterpoint to an intimate dialogue between two lovers, Bach illuminates the two sides of divine revelation: the Lord (Greek: Kyrios), and the friend and mystical bridegroom, seen in the incarnation of Jesus Christ. The first section of the Mass ends with a second “Kyrie,” a polyphonic movement set in the stile antico.

The second part of the Mass is the Gloria in excelsis Deo (Glory be to God on high). Bach achieves a contrast from the affect of the preceding cry “Have mercy” with a musical design that differs significantly from the Kyrie. The Gloria is a concertolike movement with a long instrumental introduction in which the choir is integrated like a second instrumental group into the texture. One can almost hear the influence of Bach’s instrumental works such as the Brandenburg Concertos. The heavenly orchestra of the Gloria is then juxtaposed with the earthly sounds of human voices in the section “Et in terra pax” (And peace on earth); the instruments fall silent for a moment, Bach features the unaccompanied human voice, and the instruments slowly return. Then Bach takes the concerto form, referenced in the beginning of the Gloria, to a different level in the following “Laudamus te.” This section resembles a solo concerto for violin and orchestra in which the violin develops its theme for several measures until the solo soprano enters, expanding the theme further before the voice finally breaks free. Just as the transition from the Kyrie to the Gloria was full of contrst, the following choral section “Gratias agimus” differs stylistically from the preceding aria. Bach uses a polyphonic movement from the cantata Wir danken dir Gott, composed in 1731, and overlays it with the Latin text. The music of the “Domine Deus” that follows was also taken from an earlier composition—a cantata composed in 1727. It is a movement for a solo instrument (this time the flute), and begins with a concertolike dialogue with the orchestra. A soprano and tenor then enter to engage in a dialogue with the instruments. With its plethora of parallel thirds and sixths, this movement has a character that resembles the “love duet” in the “Christe eleison,” and it is no accident that in both cases the text speaks directly to Jesus Christ. Religious metaphors in Bach’s time frequently referenced themes from the Song of Songs (bride/bridegroom) to describe the relationship between Christ and the believer, and this understanding is reflected in the intimate musical design of the Mass movements.

When Bach returned to work on the Mass in the late 1740s, he continued using the parody technique for most of the remaining movements. While the introductory section of the Credo, a polyphonic piece with a walking bass, had been composed with the same Latin text a few years earlier, the ensuing “Patrem omnipotentem” is a parody of a movement written in 1729 (Cantata 171). It was not difficult for Bach to remodel this older piece, because the mood and content of both pieces are similar—both praise the power and might of God.

The mood changes in the following movements of the Creed, turning increasingly darker and culminating in the “Crucifixus.” Here, a chromatic bass line serves as a ground for an extraordinarily expressive choral setting. Although Bach borrowed the musical material from an older work, the music and the text fit together in an exemplary manner. In the following sections, Bach depicts the resurrection of Christ and praises the Holy Spirit. The Credo ends as it began, again reflecting Bach’s interest in symmetry, with a combination of a modern concerto and an ancient-sounding stile antico setting.

While the first part of the Sanctus was already composed for a festive Christmas service in 1725, the “Osanna,” “Benedictus,” and Agnus Dei were conceived at the same time as the Credo. The Sanctus and “Osanna” use the full orchestra, in contrast to the “Benedictus,” a highly emotional movement for flute and tenor. After a repetition of the “Osanna,” the alto sings the Agnus Dei, accompanied by violins. This movement, about the Lamb of God who died for the sins of the world, is a simpler, almost intimate dialogue between the voice and the instruments without the virtuosic splendor of earlier arias in the Mass. When at the end of the composition Bach repeats the “Gratias” from the Gloria section, now with the text “Dona nobis pacem,” he builds a bridge between the older sections and the newly composed ending.

There is no evidence that Bach ever performed the entire Mass or even parts of it (with the exception of the Sanctus in 1725) during his lifetime. When Bach completed the work late in life, his aim was to collect and preserve some of his most remarkable compositions. By integrating them into the Mass, he created a work that both reflected his accomplishments as a vocal composer and became a model for composers of later generations. He also created one of the greatest and most timeless masterpieces in the Western musical canon.

Free; no tickets or reservations