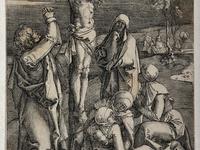 Presented in conjunction with the American Bach Society conference and Back to Back Bach. More information for the April 28th performance of the Mass in B-minor is available here.

Tonight’s performance offers a rare opportunity to hear one of Johann Sebastian Bach’s monumental masterworks, in the words of conductor David Hill, refracted “through the prism” of another great composer’s musical style and aesthetic sensibility. On one level, the Romanticized arrangement of the St. John Passion that Robert Schumann conducted in Düsseldorf in 1851 was an act of homage, an ardent and highly public profession of faith in the godlike genius whom Schumann had come to revere as both “unapproachable” and ultimately “unfathomable.” On another, more personal level, Schumann’s St. John served as a kind of artistic validation: in tracing the wellsprings of his own music back to the venerable cantor of Leipzig, Schumann presented himself as Bach’s descendant in all but name, thereby establishing his lineage in the pantheon of German composers.

After Bach’s death in 1750, his reputation had taken a nosedive, his deeply learned and elaborately contrapuntal music eclipsed by works in the more fashionable Rococo and Classical styles. For decades Bach’s great cantatas, passions, and other sacred choral works languished unheard, the dusty scores preserved by a small cadre of musical antiquarians; even his keyboard and other secular instrumental music, though widely studied and admired, was seldom performed in public. In 1829, however, Felix Mendelssohn led a landmark revival of the St. Matthew Passion in Berlin that catapulted Bach to the status of national hero even as it precipitated a wholesale rediscovery of his music. Schumann, Mendelssohn’s close friend and Leipzig colleague, would play a prominent role in the Bach Revival, not only through his performances and journalistic essays, but also as a founder of the Bach Gesellschaft, or Bach Society, which inaugurated the first complete scholarly edition of the composer’s works only a year before Schumann unveiled his version of the St. John Passion.

Of the five settings of the Passion story that Bach is reported to have composed, only two—those based on the Gospels of the apostles Matthew and John—have come down to us in their entirety. The Passion according to St. John was first performed in Leipzig on Good Friday 1724, a little less than a year after Bach’s appointment as cantor at the St. Thomas School. Like the lengthier and more frequently heard St. Matthew Passion, written some three years later, it relates the events leading to Christ’s crucifixion and death in a sequence of narrative recitatives, lyrically reflective solo arias, and choruses representing the collective voice of the congregation. Unlike the St. Matthew, however, the St. John Passion is not set to a libretto by a single poet; rather, the biblical text from chapters 18 and 19 of the Gospel of John, mainly sung by the tenor Evangelist, is supplemented with a medley of poems compiled by an anonymous librettist. The theological underpinnings of the two works are similarly disparate. As Markus Rathey observes in his recent study of Bach’s major vocal works, “The Gospel according to Matthew … emphasizes the suffering of Jesus the human as a basis for salvation, whereas the Gospel according to John views the death of Jesus as a demonstration of his divine glory.”

In keeping with its original liturgical function as part of the Good Friday Vespers service, the St. John Passion was divided into two parts, interrupted by congregational hymn singing and an hour-long sermon offering an edifying commentary on the Passion narrative. Part 1, ending with the chorale “Petrus, der nicht denkt zurück” (Peter, who did not recollect), takes us up to Jesus’s arrest in the garden of Gethsemane, while Part 2 picks up the story with his trial, suffering, death, and burial. Bach revised the work extensively for a repeat performance in 1725—among other changes, he replaced the opening and closing choruses, subtly shifting the focus from the glory of God to the sinfulness of mankind—and continued to tinker with it to the end of his life. As a result, there is no single definitive text of the St. John, and modern performers typically follow Bach’s lead in combining elements of the various “authorized” versions.

Common to all is the quasi-theatrical character of Bach’s music, as illustrated by such passages as the lightly skipping duet for soprano and flute “Ich folge dir gleichfalls mit freudigen Schritten” (I follow you likewise with joyful steps), the deranged furor of the vengeful mob chanting “Weg, weg mit dem, kreuzige ihn!” (Away with him, crucify him), and the shuddering tremolos that evoke the earthquake after Christ’s death. Many of Bach’s contemporaries found this unaccustomed dramatic style disconcerting. Writing about another Passion oratorio, one chronicler recalled: “When in a large town this Passion music was done for the first time, with twelve violins, many oboes, bassoons, and other instruments, many people were astonished and did not know what to make of it. In the pew of a noble family in church, many ministers and noble ladies were present, who sang the first Passion chorale out of their books with great devotion. But when this theatrical music began, all these people were thrown into the greatest bewilderment, looked at each other, and said, ‘What will come of this?’ An old widow of the nobility said, ‘God save us, my children! It’s just as if one were at an operatic comedy.’”

Bach’s musical dramaturgy was second nature to Schumann, whose reliance on literary and other extramusical sources of inspiration led him to invent a pair of fictitious alter egos, the stormy, impulsive Florestan and the dreamy, ruminative Eusebius. “Do you know Bach’s Passion according to St. John, the so-called little one?” he wrote in 1849 to Hamburg’s municipal music director, Georg Dietrich Otten. “I’m sure you do! But don’t you think it is much bolder, more powerful and poetical than the Passion according to St. Matthew? … I think [the St. Matthew] contains some shallow parts and is inordinately long. But the other—how condensed, how full of genius, especially the choruses. And what consummate art! … But nobody writes about it… . That’s how it is and always will be. But some pieces must be left for the minority, for the few widely scattered, truly artistic minds, and they have Palestrina, Bach, Beethoven’s last quartets, etc.”

In conscripting Bach into his polemical war against Germany’s musical philistines, Schumann adopted the religious language of his fellow acolytes in the burgeoning Bach cult. “I myself make a daily confession of my sins to that mighty one,” he said, alluding to his methodical study of Bach’s preludes and fugues, “and endeavor to purify and strengthen myself through him.” Schumann’s early teachers—including his future father in law, Friedrich Wieck—nurtured his budding interest in Bach and other pre-Classical composers. In addition to mastering the Well-Tempered Clavier, which he called his musical “grammar,” he copied out the Art of Fugue in hopes of plumbing the mysteries of Bach’s “boldly labyrinthine style,” and composed anachronistic keyboard accompaniments for Bach’s solo violin and cello works, just as Mendelssohn had done for the great D-Minor Chaconnne. In 1845, Schumann’s study of contrapuntal technique bore fruit in a set of six keyboard fugues on a theme based on Bach’s musical monogram, which he euphorically predicted would “long outlive my other works.”

Yet Schumann’s fascination with Bach was far from academic. In his eyes, the Baroque master was nothing less than a proto-Romantic. “The whole so-called Romantic School (of course I am speaking of Germans) is far nearer to Bach in its music than Mozart ever was,” he declared. In Mendelssohn, Schumann found a kindred spirit. He attended Mendelssohn’s highly touted historical concerts with Leipzig’s Gewandhaus Orchestra, including an 1841 revival of the St. Matthew Passion. Upon moving to Düsseldorf nine years later, Schumann put the St. John Passion at the top of his agenda as municipal music director. Armed with an orchestral score published in 1831 (the Bach-Gesellschaft’s scholarly edition wouldn’t appear until 1863), he began rehearsals in January 1851, ably assisted by his wife Clara, who played the continuo part on a modern piano. The local choral society of some 120 singers was smaller than the 158-voice choir Mendelssohn had used in his 1829 St. Matthew, but many times larger than Bach’s chamber-sized ensemble of three or four voices to a part.

Despite such concessions to contemporary taste, the performance that took place that Palm Sunday, in a concert hall normally used for symphonic music, was remarkably faithful to Bach’s St. John by mid-nineteenth-century standards. Not only was Schumann’s version substantially complete, but the small number of annotations he penciled in the score suggest that he was more circumspect than Mendelssohn with regard to Bach’s tempos, dynamics, and other expressive features. It’s true that several numbers had to be reassigned or cut when singers pulled out at the last minute. Obsolete instruments such as the viola d’amore, viola da gamba, oboe da caccia and lute were replaced with modern strings and winds, and here and there Schumann took judicious liberties with Bach’s orchestration—for example, by inserting a fanfare-like trumpet accompaniment in the alto aria “Es ist vollbracht” (It is finished). Schumann’s touch is also apparent in the varied instrumentation of the chorales, in which the adult choir was reinforced with 50 boy sopranos (girls in tonight’s performance).