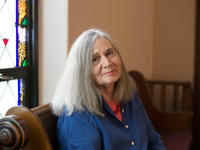 Marilynne Robinson in conversation with Christian Wiman. A book signing follows (books will be on sale).

This event is free, but due to the limited capacity of Sudler Hall, registration is required.

The event will be livestreamed—visit our live stream page to watch this event.

NOTE: Marilynne Robinson will be giving two lectures in April:
April 7: The Ways We Use History
April 14: How We Talk about the Present

Marilynne Robinson is the recipient of a 2012 National Humanities Medal, awarded by President Barack Obama, for “her grace and intelligence in writing.” She is the author of Gilead, winner of the 2005 Pulitzer Prize for Fiction and the National Book Critics Circle Award, Home, winner of the Orange Prize and the Los Angeles Times Book Prize, and Lila, winner of the National Book Critics Circle Award. Her first novel, Housekeeping, won the Hemingway Foundation/PEN Award. Robinson’s nonfiction books include The Givenness of Things, When I Was a Child I Read Books, Absence of Mind, The Death of Adam, and Mother Country, which was nominated for a National Book Award. She teaches at the University of Iowa Writers’ Workshop and lives in Iowa City.

Christian Wiman is the author, editor, or translator of twelve books including, most recently, He Held Radical Light: The Art of Faith, the Faith of Art. Mr. Wiman has taught at Stanford, Northwestern, Lynchburg College in Virginia, and the University of Economics, Prague. From 2003 until 2013 he was the editor of Poetry magazine, the premiere magazine for poetry in the English-speaking world. During that time the magazine’s circulation tripled, and it garnered three National Magazine Awards from the American Society of Magazine Editors. Mr. Wiman has written for The New Yorker, the New York Times Book Review, The Atlantic, and numerous other publications. He is a former Guggenheim Fellow and holds an honorary doctorate of humane letters from North Central College. His particular interests include modern poetry, Russian literature, the language of faith, “accidental” theology (that is, theology conducted by unexpected means), and what it means to be a Christian intellectual in a secular culture.