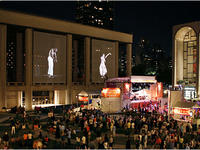 Held over through Friday!

There will be a panel discussion with the artist and Yale Faculty on Friday, September 12. Info here.

Director’s Note  |  About the Artist  |   The Dancers  |  Production Credits

Note: Cross Campus at Yale University is the block bounded by Elm St., High St., Wall St., and College St. Onstreet parking is available; meters are in service until 9 pm.

In celebration of its 40th anniversary, the Institute of Sacred Music offers David Michalek’s film installation Slow Dancing as a gift to the city of New Haven and the university community. The ISM has had a long association with this artist as a lecturer in religion and visual arts, and in exhibiting his 14 Stations last year.

Slow Dancing is a series of 46 larger-than-life, hyper-slow-motion video portraits of dance artists from around the world, displayed on a triptych of giant screens. Each subject’s movement (approximately 5 seconds long) was shot on a specially constructed set using a high-speed, high-definition camera recording at several thousand frames per second (standard film captures 30). The result is approximately 10 minutes of extreme slow motion.  As the films unfold, gesture by barely perceptible gesture, viewers can choose to focus on one dancer’s complete performance or observe the interplay among the screens.

What at first appears to be a series of still photographs unfolds gesture by barely perceptible gesture—a motion portrait in which each dancer’s unique artistic expression and technique are revealed. Viewers can choose to focus on one dancer’s complete performance or observe the interplay among the three screens. The extreme slow motion enables the viewer to share privileged information about the complexity of the simplest gestures, catching details that would normally escape the naked eye.

Slow Dancing has been exhibited in 28 international cities, most often as a work of public art. As such, it functions as an opportunity for empathetic viewing and contemplative observation in the midst of a busy city center.