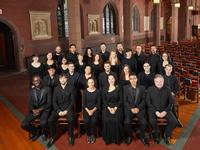 This concert will be live streamed. Visit the ISM Live Stream page to watch.

Haydn occupies a pivotal place in the history of Western music. In 1732, the year he was born, Bach, Handel, and Vivaldi, composers whose music defined the High Baroque style, were still in their primes. By the time he died seventy-seven years later, Beethoven was hard at work ushering in the Romantic era. Haydn’s lifetime thus neatly encompassed the Classical era, and his music reflects the “classical” virtues of equilibrium, clarity, and seriousness of purpose that we associate with the Enlightenment. His influence was felt throughout Europe, even though he spent virtually his entire career either in Vienna or in the idyllic seclusion of Prince Nicolaus Esterházy’s country estate in Eisenstadt, where he served as resident Kapellmeister. After that sinecure, so conducive to sustained creativity, came to an end in 1790, Haydn embarked on two extended sojourns to London, where he wrote a clutch of popular symphonies that made him the toast of Europe. In 1795 Prince Nicolaus II lured the aging composer back to end his days in the Austrian capital. This late period yielded many of Haydn’s finest works, including the richly humanistic oratorios The Creation and The Seasons and no fewer than six settings of the Roman Catholic mass, written for the annual name-day celebrations of the prince’s wife.

Haydn took full advantage of the resident orchestra that Nicolaus placed at his disposal in Eisenstadt. Buoyed by the success of his “London” symphonies, he scored the Lord Nelson Mass for a festive ensemble of three trumpets, woodwinds, timpani, strings, and continuo, leading the musicologist H. C. Robbins Landon to characterize this work and its five companions as “symphonies for voices and orchestra using the mass text.” (Owing to a temporary reduction in the orchestra’s personnel, the wind parts were allocated to the organ at the first performance of the mass in 1798, as in tonight’s performance.) The use of such “worldly” instruments in the church had been discouraged under the ecclesiastical reforms promulgated by Emperor Joseph II in 1783, prompting a disgruntled Haydn to declare a moratorium on sacred music. No sooner were the decrees rescinded, however, than he returned to the field with gusto, embarking in 1796 on a cluster of quasi-operatic works that demonstrated his prowess as a dramatic composer. Although Haydn was sharply criticized for mixing sacred and secular idioms–Antonio Salieri, the powerful imperial Kapellmeister, dismissed his late masses as a stylistic “mishmash”–such views appeared increasingly outmoded by 1802, when a prominent German music writer opined that “church music may appear in whatever form it wants so long as it maintains the character of solemnity and devotion.”

Solemnity and devotion abound in the Lord Nelson Mass—or, to call it by the name Haydn entered in his personal catalogue, Missa in Angustiis. (The precise meaning of the Latin is somewhat obscure, but “Mass in Straitened Circumstances” seems as good a translation as any.) Both it and its predecessor, the Missa in Tempore Belli (Mass in Time of War) of 1796, were composed in the shadow of the escalating conflict between France and the other major European powers that would soon engulf the continent as Napoleon pursued his imperial conquests. According to a contemporary report, Haydn was putting the finishing touches on the Missa in Angustiis in August 1798 when he received word of Admiral Horatio Nelson’s victory over the French forces at the Battle of the Nile. Infused with patriotic ardor, he purportedly inserted the trumpet fanfares that figure so prominently in the Benedictus movement and lend a stirring, martial character to much of the mass. Even allowing for the fact that news of Nelson’s triumph didn’t actually reach Vienna until mid-September, there is no doubt that the association with Britain’s renowned military genius gave currency to the work’s popular nickname. It would become more firmly attached two years later, when the mass was performed at Eisenstadt in the presence of the great man himself and his equally celebrated mistress, Lady Hamilton.

The solemn, foreboding atmosphere of the opening bars is accentuated by somber drumbeat patterns in the trumpets and timpani and the chorus’s emphatic octave leaps on the word “Kyrie” (Lord), which conspire to fix the home key of D minor firmly in our ears. Although the prayer sounds more hopeful when it’s taken up by the solo soprano in F major, the somewhat muddled tonality of the ensuing choral fugue seems emblematic of wartime Vienna’s apprehensive mood. Haydn’s characteristic optimism asserts itself in the Gloria’s confident D-major strains (with a sharp swerve to B-flat major in the central “Qui tollis” section as the solo bass fervently pleads for the Savior’s mercy) and the choir’s spirited canonic recitation of the Nicene Creed in the Credo. Christ’s incarnation, crucifixion, entombment, and resurrection are masterfully depicted in deft dramatic strokes. The last three movements of the mass offer further examples of Haydn’s often playful text-painting: the rising arpeggios on the words “Pleni sunt coeli” (“The heavens are full”) in the Sanctus are conventional but nonetheless effective. The long, mysterious orchestral prelude to the Benedictus contrasts with the sturdily affirmative choral benediction and the giddily leaping theme of the “Osanna.” The Agnus Dei culminates in another energetic fugue, this time in jubilant D major, marking the end of our musical and spiritual journey from darkness to light.

By all accounts, Haydn’s Catholic faith was simple and sincere. “He was very strongly convinced in his heart that all human destiny is under God’s guiding hand, that God rewards good and evil, and that all talents come from above,” wrote his friend and biographer Georg August Griesinger. Intolerance, Griesinger observed, was foreign to the composer’s accepting nature. “Haydn left every man to his own conviction and recognized all as his brothers. In general, his devotion was not of the gloomy, always suffering sort, but rather cheerful and reconciled, and in this character, moreover, he wrote all his church music.” It was in a spirit of joyous offering, rather than pious abnegation, that the composer penned the rubrics “In Nomine Domini” (In the Name of God) and “Laus Deo” (Praise Be to God) at the beginning and end of the manuscript score of the Lord Nelson Mass.

Commissioned by the Yale Institute of Sacred Music, Ascensio Domini is the third part of a large cycle of vocal-instrumental compositions that cover the liturgical period from Jesus’ passion and death on the cross through his resurrection and ascension. The full title of the cycle is Via crucis, Resurrectio, et Ascensio Domini. A setting of a Latin text, it was written between 2000 and 2018. Via crucis was composed for my doctoral degree.  Resurrectio was commissioned by the Archbishop of Cologne.

Ascensio Domini lasts about twenty-five minutes and is scored for four soloists, choir, and orchestra. It was commissioned to be performed by an ensemble of period instruments, but a modern orchestra may also be used. The composition falls into five movements: the opening instrumental Sinfonia is followed by two settings of biblical texts (“Viri Galilei” and “Baptismus”), the hymn “Salutis humanae Sator,” and a final “Alleluia.”