Join us on Sunday, February 19 at 5 p.m. for “Breath of Earth” performed by Yale Schola Cantorum and conducted by David Hill. The program will include:

Roundtable: Prior to the concert, join us at 3:30 p.m. in Sudler Hall (entrance through Harkness Hall, 100 College Street) for “ ‘Wanting Song, In the Beginning’: A Roundtable on Images of Eden in History, Culture, and the Environmental Crisis”, a roundtable discussion on the theme of the enduring image of Eden and the garden. Drawing on their expertise in history, literature, architecture, art, and religion, a distinguished panel of Yale scholars and writers will reflect on the image of Eden and the garden, whether as a site of hope or loss, promise or peril, crisis or sustenance. The roundtable, moderated by Ryan Darr,  will begin with brief presentations by the panelists and move quickly to a free-flowing discussion among panelists and audience members. Speakers include:

Yale Schola Cantorum is a chamber choir that performs sacred music from the sixteenth century to the present day in concert settings and choral services around the world. 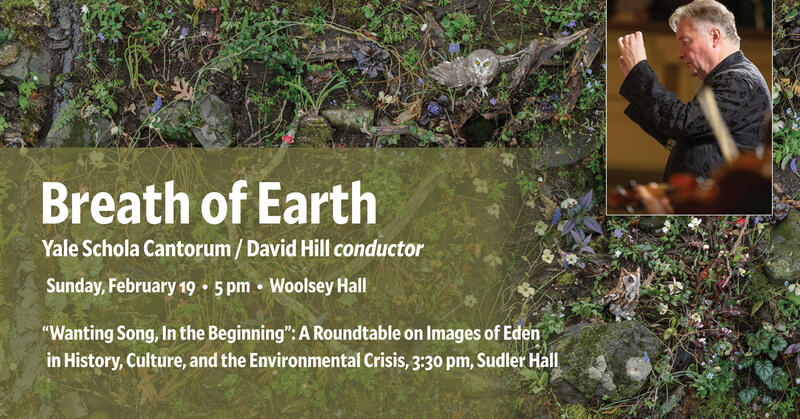