Alumni Profile: In Her Own Words 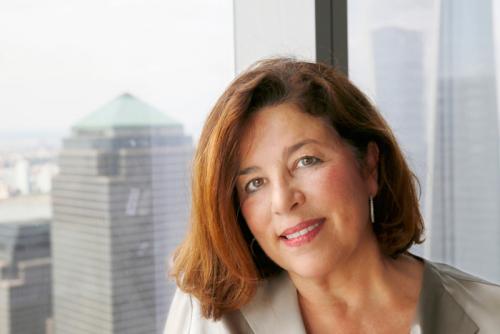 I write nonfiction, primarily about design and architecture. My new book, One World Trade Center: Biography of the Building, is my fifth work of architectural history. I love what I do, a combination of writing, teaching, and consulting. It affords me a good deal of freedom, starting with a forty-foot daily commute to my studio, an old hay barn behind my house, and wearing my jammies if I choose. The latter is a time-honored literary tradition, by the way – Balzac famously wrote in his bathrobe. I like my solitude and the company of my thoughts.

Luckily, that seclusion is leavened with human interaction, conducting interviews, lecturing, and consulting on the public areas of large-scale infrastructure. For the new book, I recorded more than 100 interview hours with those intimately involved at the World Trade Center, from designers to developers to laborers. My readers will learn about the Trade Center just as I did—from the experts who designed and built it. It was the privilege of a lifetime to write this book, the first to examine the World Trade Center in its entirety.

Architecture has indelible power. It anchors memory. If you doubt this, imagine your childhood home. Whether house, apartment, or farm, you’ll be able to draw the layout of those rooms with remarkable accuracy. It’s easy to forget the fundamental connection we have to structures, except when something goes wrong. My aim is to tell a story that moves readers beyond architecture’s abstraction and into an understanding of its primary purpose, which is to create a human place. Since I write specifically for those who profess “not to know much” about architecture, I try to throw open as many doors and windows as possible onto that subject, because the buildings we build shape the quality and meaning of our lives.

That said, writing for the general public can be an exercise in humility—no insider jargon allowed. Writing illustrated books, with admittedly dazzling photographs, increases that sense of humility when one’s book is deemed “too pretty” to be of substance. Critics tend to mistrust beauty and they certainly mistrust optimism! Yet visual wonder delivers a sense of pleasure that is quite real, innate and intimate. It opens the heart. I’m not sure when cynicism became a mark of sophistication, but I don’t buy it. Last year, the National Endowment for the Humanities recognized me as a Public Scholar, a welcome affirmation of my efforts to communicate as broadly as possible.

Architecture and religion have the same end: to provide orientation. Good buildings and good religion always relate one thing to another, they connect rather than separate. “Architecture is an act of love,” Le Corbusier said, conjuring its ethical dimensions. Since graduating, I have continued to write, albeit with a new and more rigorous understanding of ethics. My liturgical training has helped me think more expansively about how people use and move about space, a boon as I progress from writing for the public to the creation of actual public places. I learned a lot about faith traditions beyond my native Catholicism and at the same time, thanks to Margaret Farley, Carlos Eire, and Karsten Harries, came to appreciate more deeply a religion that I had practiced without much thought since childhood.

My gifted and generous teachers at the ISM, the Divinity School, and other schools at Yale—Peter Hawkins, Dolores Hayden, Thomas Troeger, and Laura Wexler, to name a brilliant handful—taught me how to teach. For the past four years, I’ve taught nonfiction writing at SUNY Purchase and, in alternating terms, courses on architecture and religion. My ISM classmates are an ongoing source of inspiration—and practical advice. Recently, when I recorded the One World Trade Center audiobook, I relied on voice-saving recipes from Sherezade Panthaki (A.D. ’11) and Melanie Russell (A.D. ’08).

For a book on American monuments, I interviewed Richard Benson, a photographic printer and former dean of the Yale School of Art. As we spoke about one’s obligation as an artist to the reading public, I shared my fears that my words wouldn’t adequately convey the emotional and psychological weight of memorials. Benson’s reply has guided me ever since:

“Your job is to make things clear. To be very clear headed.  It’s not about what I think, it’s about what’s there. One way we describe things clearly is that we don’t get all emotional about them. We don’t try to manipulate readers’ feelings and bring them to some new emotional or ethical understanding. Now people can get emotional, but we can’t when we’re the makers. We have to be concerned about what’s there.”

The enormous effort it takes to be clear eyed, to write history in a plainspoken way, is my spiritual practice. It is how I serve others.

Life can be interesting, not to say difficult, when you’re a creative. It may look glamorous, but we artists tend to be “lilies of the field.”  I’ve come to understand that not knowing how all the bills will be paid is a surrendering to God, that every day I get to depend on grace. The many truly good people I met at the ISM moved me from complaint to gratitude, especially in these last few years, when it has become utterly clear how powerfully the Spirit has directed my path.