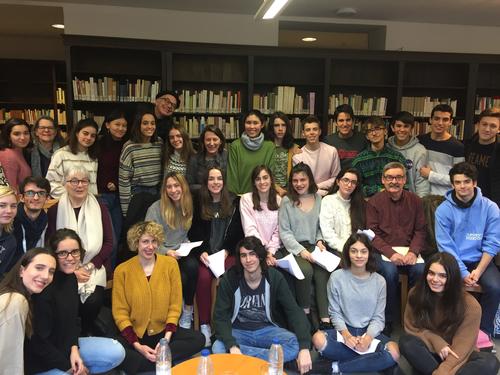 The author of two poetry collections, The Clerk’s Tale and The Road to Emmaus, the Rev. Spencer Reece (M.Div. ’11) is also the founder of the Unamuno Author Series, Madrid’s first anglophone literary festival. Begun in 2011 after Reece graduated from Yale and moved to Madrid (where he was ordained and became the canon to the ordinary for the Spanish Episcopal Church), the series is named after Miguel de Unamuno (1864–1936), an important Spanish Basque writer and philosopher during the Spanish Civil War.

The festival began simply. Reece asked his friend, the poet Richard Blanco, to give a reading for a small group of people. Ten came and the bishop made tapas. Unbeknownst to them, Blanco would be invited the next year by President Barack Obama to read at his 2013 inauguration.

Years passed and more writer friends would visit Reece and give readings. Now based at an independent bookshop, Desperate Literature, there have been forty events through the cathedral featuring over sixty different authors.

Eight years after founding the series, Reece and his team are planning an international author festival the likes of which Madrid has never seen. Fundraising efforts totaling $22,500 will help bring over sixty writers from around the world, including Sharon Olds, Forrest Gander, Greg Pardlo, Travis Helms (Berkeley M.Div. ’13), and so many others. In anticipation of the event, The Paris Review has requested first refusal rights to podcast interviews.

All the readings will be recorded by a team from Poetry Spoken Here, an online poetry podcast based in Brooklyn, New York. The festival also features lectures on Spain, the Spanish Civil War, and the church´s relationship to Spanish poetry.

In response to the success of the series, Reece credits the ISM for expanding his artistic and spiritual horizons: “Apart from my ordination process, there was perhaps no more formative experience for me than my time at the ISM. The ISM gave me permission to think of how I could blend my art with my church. For that I am forever grateful.”

The festival runs from May 27th through June 1st. For more information visit the festival website unamunoauthors.com.