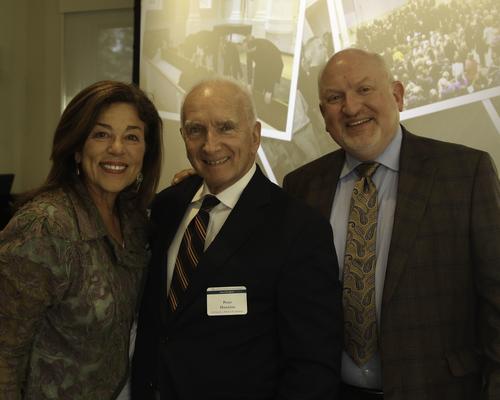 Upon the completion of a post-doctoral fellowship program at the Frederick Douglass Institute in 2018–2019, Cory Hunter (M.Div. ’09) began a dual tenure track appointment as Assistant Professor of Music at the University of Rochester and Assistant Professor of Musicology at Eastman School of Music. His current book project, The Politics of Spiritual Realism in Gospel Music Discourse and Practice, examines black gospel music in the twenty-first century and the ways in which gospel artists use various musical and discursive practices as strategies to communicate their theological commitments. Cory also examines how gospel artists employ music and discourse as mechanisms to reconstruct their subjectivities and to challenge how their followers experience God.

Alumni gathered in New Haven to celebrate the ISM’s new home in Miller Hall, and honor Peter Hawkins, who retires in December. Those in attendance included some from the ISM’s early years at Yale, including Stephen Roberts, a member of the ISM’s inaugural class of 1976. Most of them stayed for the Schola Choral Evensong service at Christ Church.

Marguerite L. Brooks will receive the Lifetime Achievement Award from Choral Arts New England in November. The award has been given annually since 1994 to individuals who have made exceptional contributions to choral singing and its culture within New England. The organization cites her broad vision for music-making, which she has passed on to her students, who identify her as one of their primary influences.

Margot Fassler, Robert S. Tangeman Professor Emerita of Music History, returned to the ISM in September to give the first Liturgy Symposium Series talk of the year on Dialogue Drama in the Late Liturgical Sequence: “Say, Mary, What Was the Annunciation Really Like?”

Peter Hawkins gave the 2019 Pitt Lecture, entitled Dante’s Commedia: From Despair to Hope to Glory, as part of the Berkeley Divinity School’s annual Convocation and Reunion in October. He was also awarded an honorary Doctor of Divinity degree from Berkeley.

Prof. Markus Rathey published an article on “Johann Sebastian Bach’s St. Matthew Passion and the Catholic Tradition” in the spring issue of Sacred Music, the journal for Catholic church musicians. The article explores Bach’s indebtedness to medieval mysticism and its revival in the seventeenth century. Together with his wife, Danielle Rathey, who teaches at NYU, he presented a paper at the Congregational Music Conference in Oxford, England. The paper presented strategies for teaching and researching church music in a diverse and intercultural context.

Professor Emeritus Thomas Murray writes of his recent and upcoming activities. On June 17, he joined Martin Jean in playing for a memorial service using both organs in Marquand Chapel for Prof. John Cook, past ISM Director.  Together with the organ curators, he gave the traditional demonstration/tours of the renowned Newberry Memorial Organ for Yale College class reunions in May and June.

Last October, he played for the wedding of ISM/YSM graduate Chelsea Chen (A.D. organ ’09) and Elliott Simons on the celebrated new chancel organ in Saint Thomas Church in New York City.  This was the first use of the new instrument in a nuptial ceremony. More recently, he served as a member of the jury for the Albert Schweitzer Competition in the chapel of Trinity College in Hartford on September 28.

He played in a re-dedication recital at Blessed Sacrament Church in Worcester, playing a 1929 E. M. Skinner organ restored by our Yale organ curators. In mid-October he will perform and lecture for the Organ Historical Society at Stoneleigh, the newly-opened headquarters of the Organ Historical Society in Villanova, Pennsylvania, as part of a symposium devoted to the work of Boston’s Skinner Organ Company.

Thomas H. Troeger, J. Edward and Ruth Cox Lantz Professor Emeritus of Christian Communication, was introduced as a Fellow of the Hymn Society at its annual conference in July. Speaking of his friend and colleague, Michael Hawn, FHS, said that Troeger is “a renaissance person … a ‘thinking person’—covering a wide range of topics including lectionary passages, expanding our language for Deity, and especially the blending of faith and science.”

Thomas Marks is hosting a daylong symposium on October 26, which will gather scholars from all over the world to consider Hearing Emotion’s Histories: Interdisciplinary Perspectives on Sacred Music and the History of Emotions, The symposium is open to the public.