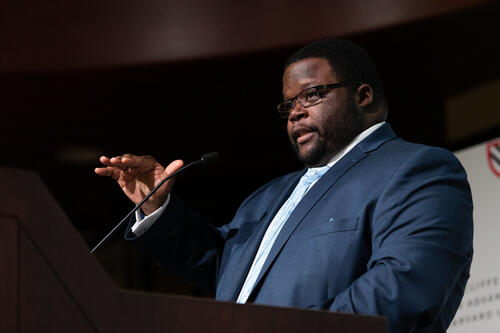 The Yale Institute of Sacred Music is proud and privileged to announce the tenured appointment of Dr. Braxton Shelley as associate professor of sacred music, of divinity, and of music, a joint appointment in the ISM, Yale Divinity School, and Department of Music that begins July 1, 2021.

Prof. Shelley comes to Yale from Harvard University to teach, to continue his path-breaking work as a theorist of African American sacred music, and to serve as faculty director of a new interdisciplinary Program in Music and the Black Church housed in the ISM. He is a scholar, an ordained minister, and an experienced church musician who will bring to Yale University much-needed attention to a vital and under-researched musical tradition.

Prof. Shelley’s work with the ISM’s new Program in Music and the Black Church will serve churches and the academy through conferences, performances, residencies, publications, and workshops that will be designed to analyze and teach the many musical practices of African American Christian communities and their extraordinary influence on a host of musical cultures—confessional and commercial, American and global.  Through its slate of activities, the program will draw together practitioners and scholars, students and congregants, neighbors and visitors, pursuing a fuller consideration of this crucial strand of African American life and history.

“I am delighted and grateful that Dr. Shelley will join the ISM in its interdisciplinary work,” said Martin Jean, director of the Institute. “His presence, and this new program that he will lead, marks a bold new way forward for the ISM to live into its mission to ‘foster, explore, and study engagement with the sacred through music, worship, and the arts in Christian communities, diverse religious traditions, and public life’.”

A native of North Carolina, Prof. Shelley graduated with highest distinction from Duke University where he majored in music and minored in history. He then entered the Ph.D. program in the History and Theory of Music at the University of Chicago. While finishing his Ph.D., he also earned a Master of Divinity degree at the University of Chicago Divinity School, upon which he was ordained in the Missionary Baptist church. In 2017, he was appointed assistant professor of music at Harvard University, where he has taught since.

Prof. Shelley is one of the most celebrated musicologists of his generation and on his way to be one of the most celebrated in any generation. He was awarded the Paul A. Pisk Prize in 2016 by the American Musicological Society (AMS) for the best paper by a graduate student. In 2018, he won the Dean’s Distinguished Dissertation Award from the University of Chicago’s Division of the Humanities. His field-changing article “Analyzing Gospel,” which appeared in the Journal of the AMS, was awarded prizes from all three major American professional societies for music studies: the Einstein Award from the AMS, the Kunst Prize from the Society of Ethnomusicology, and the Adam Krims Award from the Popular Music Interest Group of the Society of Music Theory. Recognition from these three scholarly organizations illustrates the extraordinary interdisciplinary expertise Prof. Shelley brings to our campus.

Prof. Shelley’s first book, Healing for the Soul: Richard Smallwood, the Vamp, and the Gospel Imagination, was published this year by Oxford University Press and was hailed by Prof. Cornel West as “the best book written on Gospel Music.” He added, “This instant classic forever changes modern scholarship in contemporary music and Black cultural performance.” Prof. Guthrie Ramsey of the University of Pennsylvania wrote, “This profound and illuminating book could only have been written by someone who’s spent years on the cultural frontline: in the pulpit, behind a Hammond B-3 organ, and immersed in the archives of gospel music’s history and lived experiences.”

A second book, under contract with the University of California Press, is entitled An Eternal Pitch: Bishop G.E. Patterson and the Afterlives of Ecstasy. It analyzes the great preacher’s musical style, his use of radio and other media, and the digital reverberation of his ministry after his death in 2007.

Prof. Shelley already has nearly a dozen articles and book chapters in press or published. He is also a frequent guest lecturer and clinician.

Braxton Shelley is no stranger to the ISM. He was a speaker at the 2018 Liturgy Conference “Full of Your Glory: Liturgy, Cosmos, Creation.” He presented a paper here at the daylong symposium “Antiphony Otherwise,” organized by former ISM fellow Ashon Crawley in April, 2019. Most recently, he was a speaker on this year’s virtual series “Race, Power, and the Production of Musical Canons.” The ISM looks forward to welcoming him back to his new home here this summer.

“The trailblazing multi-hyphenate Braxton Shelley has revolutionized music theory. I am thrilled he will join Daphne Brooks, Brian Kane, Tavia Nyong’o, and Michael Veal at the historic moment when the joint doctoral program between Music and African American Studies begins.” — Kathryn Lofton, The Lex Hixon Professor of Religious Studies and American Studies, Professor of History and Divinity; Faculty of Arts and Sciences Dean of Humanities

“Braxton Shelley is a visionary scholar who is carving out exciting territory for a New Gospel Music Studies, as Guthrie Ramsay terms it, that plays both to our department’s historical strength in music theory and to our emerging strength as a powerhouse in the study of Black musics.” — Ian Quinn, professor of music and chair, Department of Music

“Braxton Shelley is a rare talent, not only because of the quality of his work, but because of the range of his work. He is the personification of a gospel music program—a program that I am confident he will not only lead with the skill of a virtuoso, but will offer the Black Church and Christianity more broadly a resource that is sans pareil.” — Gregory E. Sterling, The Reverend Henry L. Slack Dean & The Lillian Claus Professor of New Testament,  Yale Divinity School