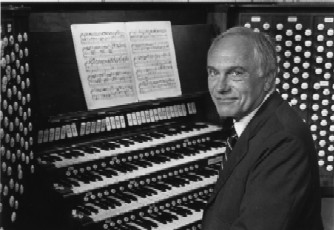 The ISM is saddened to learn that Charles Krigbaum, the eminent organist and Professor Emeritus of Music at Yale University, died peacefully at his home in Massachusetts on April 30 at the age of 91.

Prof. Krigbaum was one of the pioneers of his generation. Shortly after his graduation from Princeton University he received a Fulbright Scholarship to study in Europe with Helmut Walcha and André Marchal. He arrived at Yale in 1958 and was University Organist from 1965 to 1990. Especially known for his performances and recordings of the music of Widor and Messiaen, he was a champion of the Newberry Organ in Woolsey Hall at a time when the orchestral organ, of which that instrument is such a splendid example, had fallen out of fashion. For many years he was the organist in Battell Chapel, playing the Ellen Battell Stoeckel Memorial Organ, and he was a leader in bringing to Yale the H. Frank Bozyan Organ in Dwight Chapel. Later, the ISM commissioned a new organ in the Baroque style for the gallery of Marquand Chapel; it was dedicated in 2007 in honor of Charles Krigbaum.

“Charles was unfailingly kind, erudite, and generous with his time,” said ISM director Martin Jean. “His hospitality made my arrival at Yale many years ago even a greater pleasure and honor, and he leaves behind generations of students who still sing his praises today.”

The ISM will share other reminiscences of the Krigbaum legacy in the coming weeks, and extends heartfelt condolences to the Krigbaum family at the passing of this legendary teacher and performer.