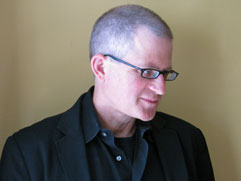 Christian Wiman, recently appointed as the Clement-Muehl Professor of Communication Arts, is a poet and educator who focuses his research on the language of faith, “accidental” theology (that is, theology conducted by unexpected means), and what it means to be a Christian intellectual in a secular culture. Wiman serves on the faculty of Yale Divinity School and the Institute of Sacred Music.

Wiman is the author, editor, or translator of twelve books, including Hammer is the Prayer: Selected Poems, My Bright Abyss: Meditation of a Modern Believer, and Stolen Air: Selected Poems of Osip Mandelstam.

A graduate of Washington and Lee University, Wiman joined the Yale faculty in 2013 as a senior lecturer in religion and literature at the Divinity School and the Institute of Sacred Music. Previously, he served as a Jones Lecturer in Poetry at Stanford University, a visiting assistant professor of English at Northwestern University, and a visiting scholar at Lynchburg College (Virginia).

From 2003 until 2013, Wiman served as editor of Poetry magazine, considered the premier magazine for poetry in the English-speaking world. During that time the magazine’s circulation tripled, and it garnered two National Magazine Awards from the American Society of Magazine Editors. For the publication’s centennial year, Wiman co-edited “The Open Door: One Hundred Poems, One Hundred Years of Poetry Magazine.” He has written for The New Yorker, The New York Times Book Review, the Atlantic Monthly, and numerous other publications.

The Yale professor has been recognized for his poetry with several awards, including the Ambassador Book Award, the Aiken-Taylor Prize for Modern Poetry, and three Pushcart Prizes. He is a former Guggenheim Fellow and holds two honorary doctorates.