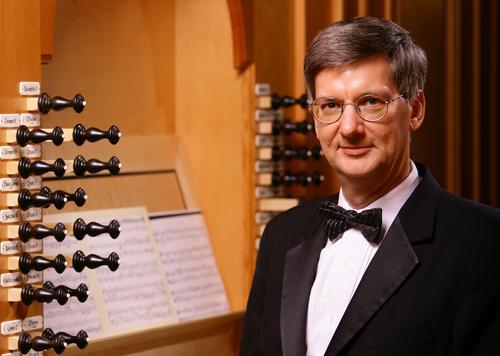 The ISM is pleased to announce the appointment of Dr. Craig Cramer as visiting professor of organ at the Yale Institute of Sacred Music and Yale School of Music for the 2020–2021 academic year. He will join us in the fall to teach half of the graduate organ majors at Yale and the organ seminar, and will participate fully in the lives of the ISM and School of Music.

Cramer holds degrees from Westminster Choir College and the Eastman School of Music, where he earned the Doctor of Musical Arts degree in organ performance, and where he was also awarded the prestigious Performer’s Certificate in Organ. His teachers include Russell Saunders, William Hays, James Drake, David Boe, and André Marchal (Paris).

Cramer is currently professor of organ at the University of Notre Dame, where he has been intimately involved in their renowned programs in sacred music, and where his teaching has been recognized with a Kaneb Distinguished Faculty Award. He is due to retire in June, 2020 after thirty-nine years of distinguished service.

One of the most traveled organists of his generation, Cramer maintains an active recital career in North America and in Europe.  He has performed in forty-four of the United States as well as in Canada.  Regularly invited to play some of the most important historic organs in the world, Cramer has performed in Germany on the 1727 König organ in Steinfeld, the 1748 Gottfried Silbermann in Nassau, and the 1692 Schnitger in Norden.  In the Netherlands he has performed on the 1725 Hagerbeer/Schnitger in Alkmaar, the 1727 Müller in Leeuwarden, the 1643/1814 Bader/Timpe organ in Zutphen, the 1696 Schnitger organ in Noordbroek, the 1770 Hinsz organ in Midwolda,  the 1756 Van Deventer organ in Nijkerk,  the 1756 Müller organ in Beverwijk, the 1768 Bätz organ in Woerden, and the 1726 Vater organ in the Oude Kerk in Amsterdam.  He has performed in Denmark on the historic Compenius and Marcusson organs in the Frederiksborg Slotskirke in Hilleröd.  In Sweden, he performed in Buxtehude’s church, Sancta Maria in Helsingborg, and on the new (2000) meantone North German organ in the Örgryte nya Kyrka in Göteborg, which was built by GoArt in the style of Schnitger.

Cramer has performed for conventions of the American Guild of Organists, as well as for many AGO Chapters across the country.  He has also appeared on numerous occasions as an orchestral soloist.  He performed the complete organ works of Bach during a series of eighteen concerts using a distinguished set of mechanical-action organs in the state of Indiana.

At Notre Dame, Cramer was instrumental in the installation of a new organ hall and organ built by Paul Fritts, which he dedicated in January of 2005 with  a series of ten different recital programs.  This organ was the focal point of an AGO National Pedagogy Conference on the subject of Buxtehude given in September 2005, and two years later, Cramer presented Buxtehude’s complete organ works in a series of nine concerts on this organ, in honor of the 300th anniversary of the composer’s death. He performed at the 2008 EROI Festival in Rochester, New York, and was a featured performer at the AGO National Convention in Boston 2014.

Cramer’s performances are frequently heard on the nationally syndicated program “Pipedreams” on American Public Radio.  He has fifteen CD recordings to his credit, including releases on the Arkay, Dominant, Dulcian, Motette-Ursina, Organeum, and JAV labels.  He has also recorded three CDs for Naxos, including a recording of works of Buxtehude on the Fritts organ at Pacific Lutheran University. JAV Recordings released Cramer’s premiere recording of the Notre Dame Fritts organ, as well as his recording on the new Fritts organ at St. Joseph Cathedral in Columbus, Ohio.

We are delighted to welcome Craig Cramer to Yale.