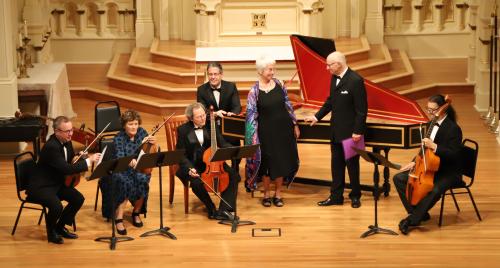 It’s been a while in coming, and we apologize for the delay. As the cold days of winter approach, we’re taking time to look back at the accomplishments of our faculty, alumni, and associates over the summer and fall months, as well as formally introduce the newest member of our concert production team, Aric Isaacs.

Reena Esmail, whose work This Love Between Us was premiered and toured in India by the Yale Schola Cantorum and Juilliard415, was named Musical America’s New Artist of the Month for August 2017.

Tripp Kennedy (MM ’14, organ) was Guest Organ Teacher in Residence at Oberlin College and Conservatory during September and October of 2017.

Hillary Purrington (Schola Cantorum) was awarded the American Composers Orchestra’s 2017 Underwood Emerging Composer Commision. The $15,000 commission will support Purrington in creating a word to be premiered by ACO in a future season.

Michael Weinberg (MMA ’15) was appointed Artistic Director of Steel City Men’s Chorus. Based in Birmingham, AL, the chorus strives to “create community, educate, and give voice to LGBTQ issues through music and service.”

Judith Malafronte spent the summer as a singer, continuo player, lecturer, vocal coach, and music critic, with excursions to the Virginia Baroque Workshop, Queens Baroque Opera Workshop, and the American Bach Soloists Academy (where Matthew Cramer, MM’17, was a participant), Tanglewood, Caramoor, the Merola Opera Program, Mostly Mozart, and the Aix-en-Provence Festival, where she reviewed five opera productions.  Be sure to ask Judith about her adventures transporting the family dog to the West Coast, where her daughter is hiking the Pacific Coast Trail.

Christian Wiman compiled and edited a collection of one hundred poems entitled Joy. It was released by Yale University Press on November 7. You can read more here: https://yalebooks.yale.edu/book/9780300226089/joy

Aric Issacs joined Laura Adam and Laurie Ongley in the concert office as a half-time concert production assistant in September 2017.

Aric is originally from Connecticut and holds a Bachelor’s degree from Wesleyan University. Most recently, he worked for seven years for the New Haven Symphony Orchestra first as Director of Patron Services, and then as General Manager in which he oversaw all aspects of concert and event production, union relations, and day-to-day office management. He also worked as Audience Services Manager for the International Festival of Arts and Ideas, and as Patron and Community Services Manager for the Connecticut Opera. He also has a background in the graphic design business.

Aric’s position has previously been occupied by part-time workers, most recently Brendan Fitzgerald, and before him, Rachel Parkes. Aric will be located at the first work station in the concert office.