For the third consecutive year, the ISM organized a field trip to New York in October to kick off the fall semester and foster community building among new and returning students and faculty. The organizing focus for the day’s activities was “memorial art,” inspired loosely by the theme for the 2014-15 Colloquium speakers series–the American Civil War. Margaret Olin (senior research scholar in YDS and the departments of Religious Studies, Jewish Studies, and History of Art) collaborated with ISM director Martin Jean to select sites that would provide tangible means of engaging with the topic: St. Paul’s Chapel, the African Burial Ground National Monument, and the 9/11 Museum. Upon arrival at St. Paul’s, Olin, co-author of Monuments and Memory, Made and Unmade, framed the day’s agenda with a brief overview of the origins and nature of memorial art. Guest speaker Susan L. Ward (professor of art history and visual culture at Rhode Island School of Design) provided a history of the chapel and its role in the 9/11 recovery. After visiting the third site, the 9/11 Museum, the group gathered in a classroom at Church of the Holy Apostles to share experiences and perspectives. One student graciously shares her reflections on the day below. ~ Kristen Forman

In the early morning of a drizzly mid-October Saturday a group of bedraggled yet caffeinated ISM students, post-doc fellows, and faculty boarded two coach buses. A couple hours later, we were deposited in the heart of lower Manhattan and gathered in the sanctuary of St. Paul’s Chapel on Broadway—our first stop of the day. Glass chandeliers cast intricate prisms on the beams of the wooden floor. The ceiling, a startling shade of baby blue, contrasted the muted pink of the walls, reminiscent of a child’s nursery. There was something deeply unsettling about the sacredness of the space.

Built in 1766, St. Paul’s Chapel is the oldest church in the city and boasts such relics as George Washington’s ornate oak-paneled pew and a sculpture in memory of a general in the Revolutionary War. But what most distinguishes St. Paul’s is its history of survival. When the buildings surrounding it were consumed by the Great Fire of New York in 1776, the chapel was saved. And even more recently, the chapel emerged unscathed from the 9/11 terrorist attacks on the adjacent World Trade Center complex, with the exception of a lone uprooted tree.

Due to its proximity to Ground Zero, the chapel served as a community relief center during the long months following 9/11. Hundreds of volunteers devoted countless hours to feed, clothe, pray for, and counsel emergency personnel involved in the recovery process, who came to St. Paul’s for respite and refreshment during and after their emotionally and physically draining shifts Deep scars in the pews permanently mark the places where firemen’s boots and other heavy equipment were stored. You can run your fingers along the grooves in the wood and it doesn’t take a lot of imagination to see them as a kind of stigmata.

The rain picked up as our group made our way to the next site, the African Burial Ground National Monument just north of city hall. The park ranger on duty told us that , historians estimate that as many as twenty thousand Africans were buried in Lower Manhattan during the colonial period. This particular site at Duane and Elk Streets is the final resting place of over four hundred bodies of Africans, most of whom never knew freedom; over half of them are children under twelve years old. The bodies, coffined individually, were discovered in 1991 when construction began on a multi-million dollar office building at the site. This sparked outrage and activism from the community that lead to governmental action. In 1992, Congress halted construction and guaranteed money to construct the 25-foot memorial, which showcases a map of the Atlantic Middle Passage (the route by which many slaves were transported) and a sheer granite structure , symbolizing the slave ports in South America—the last point of access the Africans had to their homeland. Various religious symbols are etched along the interior of the monument to honor the inclusivity of traditions and diversity of culture today. 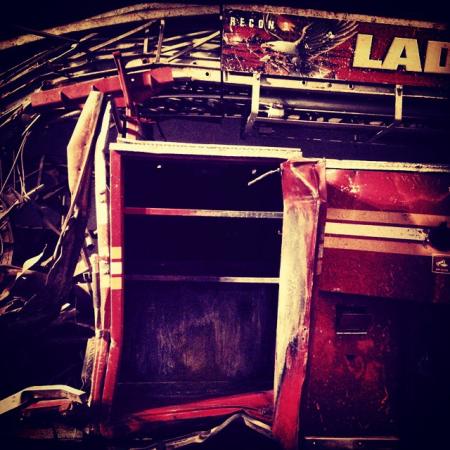 Our final stop of the afternoon was the 9/11 Memorial Museum. The museum’s 110,000 square feet and influx of tourists seemed to belittle what we’d just encountered at the African Burial Ground. Staff in blue polos herded groups into lines where we were asked to place all of our belongings, airport-style, on a conveyer belt and step up to a glass enclosure where we were, one at a time, scanned with a security wand. It was hard to miss the irony of the experience, since this is the kind of security that quickly became the standard in the aftermath of the attacks.

The museum’s exhibits take you through events of 9/11 from the perspectives of first responders, security personnel, victims trapped in the North and South Towers, and multiple collections of artifacts, from video footage to singed stilettos and burned briefcases and wallets still bearing MetroCards and MasterCards. A map shows where each plane was taken over by terrorists and the hijacked routes to the New York and Pentagon targets. An exhibit showed people jumping from the World Trade Center once they realized there was no chance of survival. A quote from a witness described one woman coming to the lip of the window and hesitating. “She held down her skirt as she jumped,” the witness said. “It was so human. An act of modesty.” An audio exhibit features calls placed from the North and South Towers in the moments following the attacks. A man sitting next to me put his face in his hands and sobbed openly. Later I stood beholding a massive engine, easily 10,000 pounds, from an elevator that serviced one of the towers. It was burned out, shredded, and useless.

Somehow, despite the museum’s best attempts to create a polished narrative of American survival and patriotism, the wreckage that so prominently symbolizes the displacement of the echelons of power, wealth, and commerce seemed to me to emphasize a quieter narrative—one of the redeeming power of grace and redemption through loss.How this narrative can transfigure the former is something I’m still contemplating.