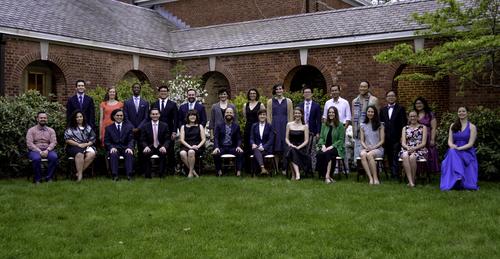 On Sunday, May 19, the ISM presented its newest graduates with their ISM certificates at a banquet at the New Haven Lawn Club. Some of our students and fellows accepted our invitation to reflect on their experience at the Institute, and their plans and hopes for the future.

Stephanie Burette (M.Div.) is deeply grateful for three years shared in the company of extraordinarily gifted musicians, artists, scholars, seekers, arts-lovers. The ISM has given her the possibility not only to  meet but also to collaborate with exceptionally talented people, with whom conversations and projects were always very stimulating. For the 2019–2020 academic year, she will serve as the Porter Fellow at St. George’s College in Jerusalem.

Maggie Burk (M.M.) will continue her graduate studies at the University of Michigan, where she will pursue a D.M.A. in choral conducting. In her first year, she will serve as the assistant director of the Women’s Glee Club as well as the founding director of the Prison Creative Arts Project Chorus. She is profoundly grateful for the friends, teachers, and colleagues who have become family during these two years, as well as for the unbelievably rich musical and cultural experiences the ISM has provided. In the words of her favorite Schola piece, Path of Miracles: “We have walked out the lives we had…changed by the journey, face and soul alike.”

Peerawat Chiaranunt (M.A.R.) will be beginning his doctoral studies in Italian at the University of Notre Dame. There, he intends to focus his research on the dynamic nexus between philosophy, theology, and poetry in medieval Italian literature. He is thankful for the academic opportunities and challenges that the ISM and Yale as a whole have given him during his two years here.

Matt Daley (M.M.) will be forever grateful for the opportunity to not only pursue music education but sacred music education as well. Earning a church music certificate from the Yale ISM made his experience at Yale truly gratifying. While the process of learning can be grueling, Matt enjoys looking back and understanding the blessings of being challenged and pushed to continue to pursue excellence as a performer, a student, and as a church musician. After being able to learn from inspiring professors such as Melanie Ross, Markus Rathey, Danielle Rathey, Martin Jean, and Thomas Murray, he feels completely confident and prepared to begin a doctor of musical arts degree this fall at the USC Thornton School of Music.

Carmen Denia (M.A.R.) will be returning to Singapore to find gainful employment, to keep studying languages (this summer, with the ISM’s support!), and (hopefully) to adopt a cat. She is grateful for the good friends she made at the ISM, the life-changing study trip to Spain, the ISM’s indefatigable administrative staff, and Dr. David Mahan’s patient mentorship. Carmen loves written correspondence and invites anyone interested in postcards or e-mails from the tropics to let her know.

Emily Donato (M.M.) has had a wonderful two years as a member of the Yale Voxtet at the ISM. Some highlights of her time here included the ISM’s tour to Spain and being a part of incredible concerts here. After graduation, she has plans to move back to New York City and continue to pursue her path as a vocal artist.

Andrew Hon (M.M.A.) is grateful for the two wonderful years at ISM and is excited to move to Montreal, Canada in the fall to start his doctorate in music in choral conducting at McGill University, where he hopes to study passion oratorios of the twenty first century.

Wonhee Lim (M.Div.) is grateful for the mentorships, relationships, and memories made while studying for his M.Div. at the ISM, singing with Schola, and cracking jokes with students and professors alike, some of whom were the most down-to-earth people he’s met. He looks forward to staying at YDS as an S.T.M. student, studying Chinese political theology, and preparing doctoral applications to study Chinese government and religion.

Allison McClain Merrill (M.A.R.) reflects on the ISM as a unique experience for every student who enters the program. She has loved studying with the finest scholars in their fields, like Professors Rathey and Ross. With the encouragement and inspiration given by such professors, she has found new academic interests (like television studies) and has deepened more seasoned interests in music history and English literature. The friendships she has made at the ISM will stay with her wherever she goes. Allison plans to continue current research projects and develop new ones. She will present research in Germany this fall at the Fourth International Conference on Communication and Media Studies at the University of Bonn.

Ashley Mulcahy (M.M.) absolutely loved singing with such wonderful friends and colleagues in Voxtet and Yale Schola Cantorum. These musical experiences were the best of her time at Yale.

Jacob Reed (M.M.) will be starting next year as a Neubauer Family Distinguished Doctoral Fellow at the University of Chicago, where he hopes finally to have time to practice the organ. Jacob has been surprised and delighted by the joy he has gotten from the ISM, and will forever remember the conversations and friendships from our three weeks in Spain.

Paul Reese (M.Div.) will begin Spanish language study in Oaxaca, Mexico through the ISM’s grant program, and will return to Pennsylvania and work in the diocese planting new Spanish bilingual worshipping communities.

Edward Vogel (M.M.) looks forward to a busy postgraduate life as a freelance musician. During the summer of 2019 he will be in residence at both the Tanglewood Festival in Massachusetts and the Britten-Pears Institute in the United Kingdom, where he will work and study with soprano Dawn Upshaw and conductor Philippe Herreweghe. Beginning in the fall, Edward will join the rosters of professional ensembles including The Thirteen, True Concord, and the Yale Choral Artists, and will make his debut with Grammy winning Apollo’s Fire in April of 2020. Edward is incredibly grateful for his time at the ISM, and for all he has learned from his amazing teachers, colleagues, and friends.

David von Behren (M.M.) has accepted the position as assistant university organist and choirmaster at Harvard University beginning fall 2019. In addition, David will be pursuing a D.M.A. at Boston University. David is grateful for the rich opportunities at the ISM. Pursuing the church music certificate, David particularly enjoyed his liturgical studies and New Testament interpretation classes. A highlight for David this year was presenting his colloquium project with his partner Allison Merrill, “A Sacred Landscape of American Television: The Waltons.”

Serving as senior organ scholar at Trinity on the Green, New Haven, David writes, “Working with Walden Moore at Trinity on the Green has been an opportunity that I wouldn’t trade for the world. The scholar position there these two years has gone hand-in-hand with the mission of Yale ISM. I am so grateful for Walden Moore and all that he does for his scholars and students.”

David enjoyed the keyboard skills classes offered through the ISM, “Gospel-playing class with Mark Miller was an incredible experience, and the opportunity to study with Jeff Brillhart studying improvisation has well equipped me for my vocations as a sacred musician and recitalist. Learning the complete works of Maurice Duruflé this past year with Martin Jean has been transformative for my musical growth. I am very grateful to Martin Jean for his unparalleled teaching, mentorship, and encouragement over this past two years. I’ve been able to make the most of the resources offered at the ISM, and I feel very fortunate to be a graduate of this institution.”

Rosemary Williams (M.A.R.) is most grateful to have spent these two years learning from the dedicated ISM faculty, especially Profs. Peter Hawkins, Melanie Ross, and Bryan Spinks; and for her many inspiring friends and colleagues who have broadened her horizons each and every day. One of her favorite ISM memories was seeing mass in the Mozarabic Rite at the cathedral in Toledo on the study trip to Spain. In the future, she looks forward to engaging in a variety of prayerful pursuits in service to the Church.

Emily Wing (M.A.R.) has been lavished with grace at the ISM. She is grateful for her advisor Sally Promey’s energy and commitment; for friendships that blossomed on the fringes of Burgos Cathedral on the ISM study trip; for professors Melanie Ross, David Mahan, Felicity Harley, and Vasileios Marinis, who have drawn her attention to the sights and sounds around her; for presentations at colloquium that call her towards a life of prayerful work.

Sze-Long Aaron Wong (M.A.R.) is grateful to have been part of Yale and the ISM community for the past three years. He is especially thankful to the liturgical studies faculty and colleagues for their generosity, inspiration, and support. In the fall, he will begin a Ph.D. program in liturgy and mission studies at Boston University.

Ashon Crawley writes, “This was an amazing year that allowed me time and space to sit, read, think and write towards my next manuscript project. I am most thankful for ‘Antiphony, Otherwise: A Hammond Organ Symposium’ and ‘Testimony Songs and Devotion,’ two events part of a day-long gathering that allowed me to bring together my scholarly and creative artistic passions for the Hammond organ and its use in Black Sacred Music.”