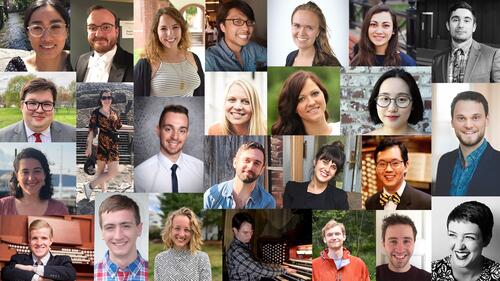 On Sunday, May 17, the ISM presented its newest graduates with their ISM certificates during an online celebration. Some of them accepted our invitation to reflect on their experience at the Institute, and their plans and hopes for the future.

Jerrick Cavagnaro (M.M.) is grateful for these past two years at the ISM and for the opportunities he had to work with such incredible faculty and student colleagues. Over the past two years, Jerrick also worked as the organ scholar at Trinity Episcopal Church on the Green in New Haven with music director Walden Moore. In August, Jerrick will begin work at Christ Church, Charlotte, North Carolina as the assistant director of music and organist.

Meg Cutting (M.M.) is moving to Chicago as the newly appointed organ scholar at St. James Episcopal Cathedral and will begin her position this August. She has had a wonderful and memorable two years as a student in the Yale organ department and a member of the ISM. She is immensely indebted to the teachers and friends who have shaped her education and experience at Yale, and who have shared with her their music, knowledge, talents, and friendships.

Benjamin Gee (M.A.R.) will be moving from New Haven to the west coast in the fall to begin a doctorate in English at Stanford University, where he plans to study the theatrical culture and dramatic poetics of early modern Britain. Ben remains deeply grateful for the ISM’s openhearted embrace of interdisciplinary learning in the humanities, a perspective he hopes to apply in his future work. He is also thankful for the meaningful relationships he has found with passionate, enterprising students representing a wide variety of fields spanning ministry to musical performance and archival studies. Ben would like to personally thank his colloquium partner Grant Wareham and advisors Marcus Rathey, Paul Hawkshaw, and Bruce Gordon, for encouraging him to perform the part of a musicologist for a brief time. Above all, Ben is grateful for Peter Hawkins’ Dante class and for his subsequent mentorship.

Berit Goetz (M.A.R.) is grateful for wonderful colleagues in the ISM who sharpened and inspired her as a vocalist, songwriter, and scholar. Memorable moments included singing in the Marquand Chapel Choir and Yale Recital Chorus, contributing original music to the Advent service, and organizing the ISM’s first new music showcase featuring the work of student composers. She looks forward to continued work in theology and the arts as a church music director, as well as to a series of writing and recording projects after graduation.

Harrison Hintzsche (M.M.) is very grateful for the friendships he has made during his time at the Institute of Sacred Music. One of his fondest memories was the 2019 Schola Cantorum concert tour to Scandinavia, where he sang in some of the most beautiful halls and cathedrals alongside a group of wonderful musicians and friends. He will miss his friends and classmates very much!

Rob Hopkirk (M.A.R.) is grateful for two terrific years at the ISM, during which he was especially happy to see Miller Hall come alive with intimate concerts, warm conversations, and late-night work sessions. After graduation, he plans to take a “gap year” and return home to Pennsylvania, where he can work during the day and prepare English doctoral applications at night. [photo with Hopkirk near here]

The ISM has been a place where Chase Loomer (M.M.) could combine his love for music with other students’ love for their subjects in creative outlets and environments. The best example of this was his exploration of PoemJazz with poet and colloquium partner Christian Detisch. They were able to combine their knowledge and passion of their respective fields and create a true interdisciplinary work of art, continuing in the development of an emerging genre.

Adrienne Lotto (M.M.) has loved singing with the Voxtet and Schola Cantorum. Although this year was cut short in many ways, she is grateful for all the opportunities she had as a member of the ISM community. Next year, or whenever possible, Adrienne will move to Manhattan and keep singing to the extent possible.

Sarah Noble (M.M.) is returning to her home state of Michigan where she is passionate about building choral programs in public schools. She hopes to be hired at the secondary level where she can use the skills she has gained from the ISM and the YSM to encourage interdisciplinary learning in choral music, literature, and the performing arts. She is hopeful that in the future she will also be able to get back on to the stage herself with the theater family that she loves dearly. Noble is grateful for the wonderful support system of faculty, friends, and mentors that she has gained while at Yale and feels that the two brief years have been undeniably formative for her future as an educator and musician.

Shirley Pan (M.A.R.) will be continuing her studies at Case Western Reserve University where she will pursue a Ph.D. in art history. “I continue to be devoted to the medium of sculpture,” she writes, and has loved how her time at Yale has been so interdisciplinary, allowing her to explore a wide range of interests.

Hopewell Rogers (M.A.R.) is so thankful to have called New Haven home for six years. As this literature student begins the proverbial “next chapter,” she’s already looking back fondly on two years of YDS studies in literature, culture, and trauma—work whose high points included traveling to Los Angeles with Sarah Noble for their colloquium project research, learning new ways to appreciate artistic beauty through the performances and scholarship of her colleagues, and writing her way through hard questions with Professors Wiman, Ross, Mahan, and Hawkins. Most of all, she wants to thank her ISM community for their kind, consistent presence through all the casual moments, like quick (or long) Refectory conversations, afternoons spent in Miller Hall catching up with Caitlin and Ray and Sally, and sunny days doing work with other nature lovers in the Divinity Farm.

Hannah Sachs (M.Div.) is grateful for three wonderful years of scholarship, creativity, and community as part of the ISM. She is appreciative of all those who have generously poured into her life and will cherish countless unforgettable memories from this experience, such as the study trip to Spain. In June, Hannah will be starting as director of creative ministries at the First Congregational Church of Burlington and is looking forward to making a life in Vermont alongside her wife Renata. [photo of Sachs near here]

Corey Shotwell (M.M.) is very grateful for the two years he spent at the ISM and with the Voxtet. He is especially glad to have been able to have this journey with his graduating class: Adrienne Lotto, Karolina Wojteczko, and Harrison Hintzsche. He eventually plans to move to New York City and keep making sounds.

Alexandra Barylski Stott (M.Div.) is grateful the ISM admitted her to continue her studies as a poet and writer. Her Yale degree marks the end of a decade-long journey. Instead of returning to the classroom to teach writing, she is launching her own writing coach and mentorship program for gifted teen girls. You can learn more about her work as an editor, writer, and coach at her website: alexandrabarylski.com.

Bailey Sullivan (M.A.R.) is eager to be attending the University of Michigan next fall in pursuit of a Ph.D. in the history of art. There, she will continue to study the history of medieval European art and—most importantly—adopt a dog. Looking back on her time in the ISM, she is grateful for the opportunity to delve into material far beyond her ken and is humbled by the vast knowledge of her peers.

Daniel Tucker (M.M.) is deeply grateful for two years of study at the Yale School of Music and Institute of Sacred Music. Besides world-class musicmaking and academic opportunities, his time at the ISM has also afforded him the chance to meet and befriend many world-class people, especially his teachers and classmates. After graduation, God willing, Daniel will take up a position as music director at a Roman Catholic church.

Grant Wareham (M.M.) is extremely grateful for the two years he spent at the ISM. He greatly enjoyed broadening his horizons as an organist, playing recitals on the Taylor & Boody Op. 55 (the meantone organ in Marquand Chapel), the Lively-Fulcher at Christ Church downtown, and, of course, the incredible Newberry Memorial Organ at Woolsey Hall. Grant also enjoyed broadening his cultural and social horizons outside of the practice room, relishing the opportunities to visit museums like Yale Center for British Art, to attend wonderful concerts by the Yale Philharmonia and Schola Cantorum, and Yale Choral Artists, as well to co-chair this academic year’s ISM Student Life Committee.

Karolina Wojteczko (M.M.) is deeply grateful for the amazing friends, teachers, and colleagues who have become family during these two years at the ISM. She is especially grateful for the opportunity to be a part of such amazing ensembles as the Voxtet and Yale Schola Cantorum which she will miss very dearly.

While there have been many highlights during her time as part of the ISM, Madeleine Woodworth (M.M.) will thoroughly miss working with Marquand Chapel Choir. The community that was built within the ensemble created a bond that deepened her passion for liturgical music and collaborative music.

Another highlight certainly includes the opportunity to travel with Schola Cantorum to Scandinavia. Getting to explore another culture while simultaneously making music to the highest level with a world-class group made for lasting memories and close friendships.

She would like to thank the three conducting cohorts she overlapped with: the classes of ’19, ’20 and ’21. It has been a dream to work with and learn from all of them, and the bond between her colleagues created over an intense program like Yale’s choral conducting curriculum is unparalleled.

She also wants to extend her gratitude to all at the ISM for making her time at Yale a life-changing experience.

The Student Life Committee offered a video tribute as a gift to the Class of 2020.

The 2019–2020 fellows were also invited to write about their ISM experience and future plans.

Blair Fowlkes Childs writes that the ISM provided a wonderfully vibrant environment for research and an exceptionally stimulating community that she will miss.

Vera Shevzov will always be grateful for the gifts of time, space, and extraordinary resources ISM so generously provided her to pursue a project on liturgy, narrative, and cultural trauma in post-Gulag, post-atheist Russia. When she returns to full-time teaching at Smith College next fall, she will fondly remember Martin Jean’s inspiring leadership and wonderful sense of humor, Eben Graves’s tireless efforts to provide Fellows with the most productive working environment, and the many thought-provoking conversations with, and warm collegiality of, her fellow Fellows. Last, but not least, she is grateful to her students in Russian Sacred Art for their patience and continued engagement as we all made the rapid transition from lively in-person seminars to Zoom during the historic COVID-19 outbreak. They helped her realize that even the most technologically challenged professor can do this!

Other fellows leaving the ISM include Thomas Marks, Ranu Roychoudhuri, and Sumarsam. We are delighted to be welcoming back Caroline Gruenbaum and Riley Soles to continue their work at the ISM, and Mark Roosien returns to the ISM as interim admissions coordinator for 2020–2021.