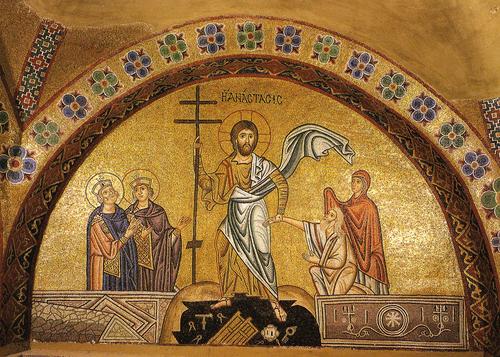 Professor Vasileios Marinis, author of Death and the Afterlife in Byzantium, shows what a mosaic from the Greek monastery of Hosios Loukas can tell us about Easter in the Orthodox Christian tradition. ISM director Martin Jean interveiws. Video goes live on April 21 at 1PM.

Professor Vasileios Marinis has been the recipient of numerous grants and fellowships including the Aidan Kavanagh Prize for Outstanding Scholarship at Yale, a fellowship at Dumbarton Oaks in Washington, D.C., the S.C. and P.C. Coleman Senior Fellowship at the Metropolitan Museum of Art, and a membership at the Institute for Advanced Study in Princeton. In 2015–2017 he was a Humboldt fellow at the Ludwig-Maximilians-Universität in Munich. Professor Marinis has published on a variety of topics ranging from early Christian tunics decorated with New Testament scenes to medieval tombs, graffiti, and visions of the Last Judgment. His latest book, titled Death and the Afterlife in Byzantium was published by Cambridge University Press in 2017.