Beginning Tuesday, June 18, three of the Yale Institute of Sacred Music’s organists will compete in the preliminary rounds of the Longwood Gardens International Organ Competition. Featuring one of the largest and most colorful Aeolian pipe organs in the world, the competition also offers the grandest prize of any in the world—a whopping $40,000—in addition to a healthy dose of prestige.

Hoping to learn more about this special event and what it’s like to compete, we reached out to current student Grant Wareham for his experience. Grant studies with Thomas Murray and also serves as organ scholar at Christ Church, New Haven, where Prof. Murray is artist in residence. He came to Yale from Rice University, where he studied with ISM graduate Ken Cowan (M.M. ’99, A.D. ’00). Grant is also one of Diapason’s “20 under 30” for 2019.

How do you feel about being chosen for the Longwood competition? What does it feel like to compete?

It was an absolute thrill to be selected. This is my first international organ competition, so that in itself is a huge deal for me. There will always be nerves surrounding big competitions, but just being here is tremendously exciting.

In comparison to other organ competitions, what makes Longwood different or special for you?

First, the setting couldn’t be more beautiful. Longwood Gardens is an absolutely stunning property, with well over one thousand acres of impeccably manicured land. The “Main Fountain Garden” is an unbelievable spectacle: Longwood spent nearly $100 million renovating and restoring it in 2016, and they now do daily shows synchronized to music that are just astounding. After the welcome banquet, we were treated to a private fountain show.

Second, the competition instrument is superb. I had a blast at my first practice session on it Wednesday. At 10,010 pipes, this organ is the largest instrument built by the Aeolian organ company for a residential setting. It was built in the American symphonic style of organ-building, much like Yale’s Newberry Memorial Organ. I’ve had a strong interest in this style of organ building, which focuses on getting the most color possible out of the instrument. The Newberry Organ was one of the things that drew me to Yale. After a year working with Professor Murray and the Newberry, my love for seeking out orchestral color in all instruments has expanded exponentially. 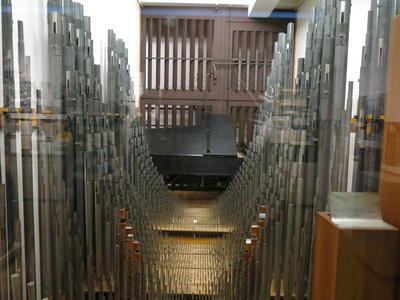 I think the greatest feature of the Longwood instrument is the variety of sounds possible. It has sounds that almost no other instrument has, like a saxophone, a musette, and a post horn. There is an entire percussion section (with actual drums)—there’s even a grand piano inside the chamber! In addition to the wealth of orchestral color throughout the instrument, I really appreciate the versatility that the console design allows. Peter Richard Conte designed it himself, and it allows the organist to control the stops in a manner that only a few instruments allow. It makes the instrument a joy to play! 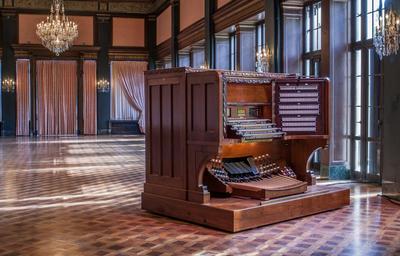 How has studying at the ISM prepared you for this competition?

Since the Newberry Memorial Organ in Woolsey Hall is also one of the greatest American symphonic instruments in the country, I can’t think of a better place to have prepared for this competition. I’ve also been so fortunate to study with Professor Murray for his final year of teaching. He’s perhaps the greatest organist in the world in terms of understanding orchestral color on the organ.