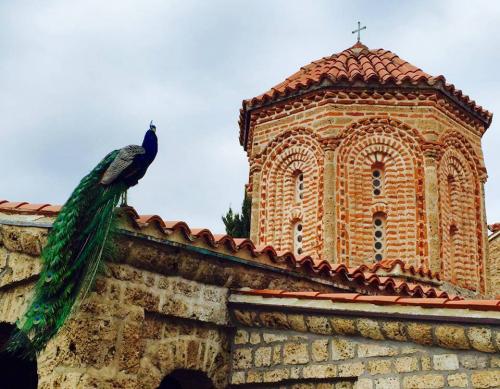 Two students reflect on their experiences as participants in the Yale ISM 2016 Spring Break travel seminar.

This past March, a group of students enrolled in the seminar “Art and Ritual at Mount Sinai” (co-taught by Professors Vasileios Marinis and Rob Nelson) journeyed across the globe to see visual art in its original context. Contrary to what the course title might suggest, however, we didn’t actually get to visit Mount Sinai. When safety concerns in Egypt emerged early in the semester, our instructors redirected our focus: instead of merely studying Sinai, we also began reading about what is now Eastern Europe, a region heavily influenced by the Byzantine Empire. During our trip, we visited several different cities, churches, and monasteries throughout Serbia, Kosovo, and Macedonia. Perhaps a more appropriate name for the course, in light of all that transpired, might be “Art and Ritual in Byzantium and Beyond.” And as we soon discovered, it was the “beyond” portion of the seminar that turned out to be the most enriching part of our experience, broadening both our research interests and our worldviews.

The trip was a whirlwind. Over the course of eleven days during Yale’s Spring Break, we visited nineteen monastic Eastern Orthodox churches in three separate countries, listened to twelve presentations from our classmates, and gazed in awe at thousands of painted figures and icons. Each church we visited was covered from floor to (often towering) domed ceiling with frescoes depicting narrative biblical scenes, royal figures, saints, bishops, and other icons. They were like nothing I had seen before.

I took notes on my phone for the duration of the trip. These notes are usually only a sentence or two long, reflecting the frequent need to look up from writing to marvel or move along. They are sometimes related to the subjects we traveled to study (“Dormition image above the exit to the nave/naos extends to the ceiling; it shows the Virgin laying horizontally and the Virgin’s soul personified as a swaddled infant, contrastingly vertical in Christ’s arms,” I wrote on the first day of the trip near Ziça Monastery). Sometimes the notes simply recorded things that I found odd or humorous: “First song heard in Serbia: ‘I Wanna Dance with Somebody.’ Apparently our bus driver is a Whitney Houston fan.” On the second day of the trip I wrote, “If you had told me a year ago that I would be attending a vespers service at an Eastern Orthodox monastery in Serbia for Spring Break, I would have laughed at you. But that’s just what I did.” Most often, though, I wrote about the experience of being in a new place, an educational, enriching experience that is altogether more formative than any seminar or library or lecture alone could ever hope to be. 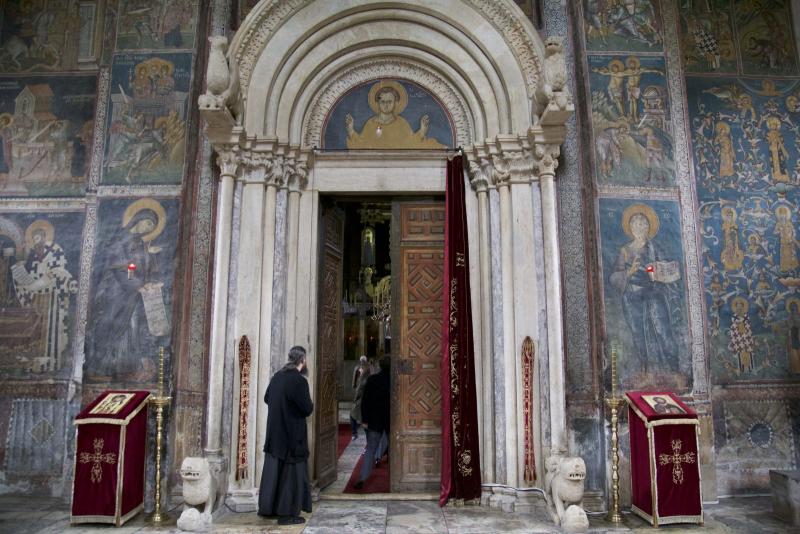 An example of this education occurred at Visoki Deçani, a remote Serbian Orthodox monastic complex in Kosovo. Deçani was unique among the churches we visited in that NATO officers inspected our passports and scanned us with metal detectors before we were allowed enter the monastery walls. We later learned from Father Sava, Deçani’s abbot, that because of the monastery’s affiliation with Serbia and its location within Kosovo, a majority Albanian and Muslim country still articulating its national identity amidst economic depression and social unrest, the monastery attracts acts of hostility. The medieval walls surrounding Deçani weren’t there just for show. Later that day, still processing the information that Father Sava shared with us, I jotted down this note as we drove down winding mountain roads on our way to another church: “Trash everywhere, in fields, in puddles that never seem to dry. Stray dogs everywhere. A graveyard less than ten feet from newly planted crops.”

These brief notes about church details and scenes from moving bus windows, scattered as they must seem, were my way of clinging to details amidst the ever-changing geography, iconographic programs, and cultural norms on this trip. We easily could have spent hours, or even days, in any one of the churches we visited and still had more frescoed stories to read,  figures to decipher, and connections to forge. Yet we sometimes visited three churches in the same day. Similarly, much still remains for me to learn about the countries we visited, and the political and social relationships we witnessed during our short stay. It was all we could do to snap as many photos as we could and, in my case, use these notes to cling to the telling details. Once the travel portion of this seminar ended, we turned our focus upon these notes and details in our attempts to process what we saw via papers and presentations. But fortunately or unfortunately, photos and words alone can never fully capture the experience of beholding these sites in person—in all of their layered complexity, wonder, and richness. 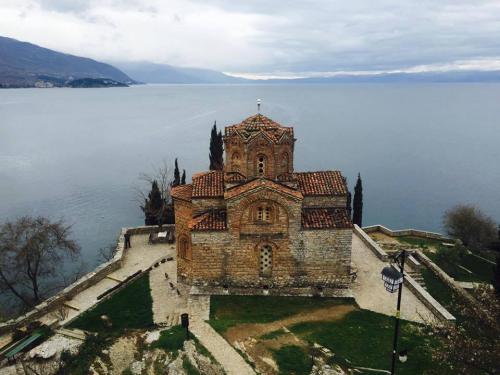 Perched upon the shores of Lake Ohrid, in the southwestern corner of the Republic of Macedonia, the city of Ohrid is home to some of the finest surviving examples of late Byzantine art and architecture in existence. Like Jerusalem, Constantinople, or Rome, during the medieval period Ohrid was an important urban center dominated by ecclesiastical life. Ohrid’s streets are dotted with Orthodox churches, ranging in size from its largest basilicas to its smallest, almost chapel-sized churches. The sacred spaces in Ohrid were once said to number at 365, one for each day of the year. Too many to ignore, these medieval churches were woven into the fabric of daily life, and those that survive remain a part of the city’s living religious tradition under the Orthodox Archbishopric of Ohrid.

The richness of this city’s churches—in their artistic decoration and architectural design—made Ohrid an important stop for the group of students and professors participating in this spring’s ISM travel seminar on Byzantine art and ritual. While in Ohrid, Professors Vasileios Marinis and Robert Nelson, along with former ISM Fellow Gabriel Radle and Princeton Ph.D. Student Nebojsa Stankovic guided our group through two of the most art historically important churches in the area: the basilica church of St. Sophia, and the monastic Church of the Virgin Peribleptos.

At the large basilica church of St. Sophia, the eleventh century medieval artists decorated the space above the altar with one of the earliest extant depictions of what is called the “Communion of the Apostles”. The scene, as a fellow student pointed out, depicts the risen Christ with angelic deacons celebrating the Eucharist, distributing the elements of the bread and the wine to each of the apostles. This composition, which would become a staple of late Byzantine church fresco programs, presents the viewer with an archetypical image of the sacrament, mirroring the regular divine liturgy performed at the altar below. 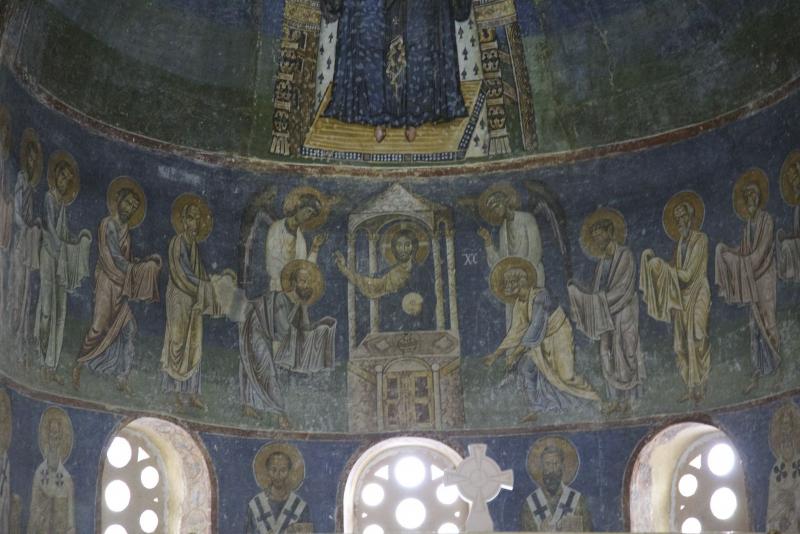 A short walk away, the monastic Church of the Virgin Peribleptos preserves a thirteenth century fresco program by artists Michael Astrapas and Eutychios. Michael and Eutychios both had long careers during their time, and we were able to observe their work at other sites during the trip, including Gračanica Monastery in Kosovo and the church of St. George in Staro Nagoričano, Macedonia. The Peribleptos Church, however, offered our group an intriguing glimpse into the early work of the Balkans’ two most important Byzantine painters.

In the church narthex, Michael and Eutychios painted a rich program of Old Testament typological images, one of which is of Lady Wisdom. Based on Proverbs 9:1-6, the composition depicts Wisdom, who, having built a house (decorated with a medallion of the Virgin Mary), sets a nourishing feast for all those who would listen to her. This image, like the others in the narthex, illustrates the ambiguous place the Old Testament occupied during the Late Byzantine period. While the Old Testament had dropped out of regular reading in the divine liturgy, Marian and Christological interpretation of the Old Testament remained central, especially within the transitional space of the church’s narthex. These frescoes particularly captivated me, a Hebrew Bible scholar, because they manifest a vibrant visual mode of Late Byzantine exegesis more often read in liturgy, commentary, and sermons than observed as artwork. Standing in the narthex of the Peribleptos Church, these frescoes—along with many of the other paintings observed throughout the trip—made the dynamic, ongoing life of the Old Testament tangible. Though the Jewishness of the Old Testament was at times seen as threatening for Byzantine Orthodoxy, when depicted in visual art, these Old Testament stories and their particular methods of Christian exegesis become didactic for a Christian monastic audience: Lady Wisdom exhorts the monk to turn aside from folly and feast upon the wisdom offered through the daily liturgy. Although they have been transmitted through time for generations, the frescoed walls of the narthex offered me a special view into the role that these stories played in one particular time and place.

Yet as much as both of these churches preserve important isolated moments in art history, they also reflect the seams and scars inflicted by the unceasing passage of time within the church. Today, St. Sophia lacks its once dominant central dome, which collapsed not long after the church’s initial construction. At the Church of the Virgin Peribleptos, the ongoing construction of an outer ambulatory (with later decorative painting) from the 14th century onwards alters the original outer architectural form of the church and disrupts some of its original 13th century frescoes. While perhaps unfortunate for modern viewers, particularly art historians, these seams testify to an institutional vitality that paralleled the ongoing life of religious texts with the history of Byzantine Christianity.

Today, Ohrid’s churches still remain a vital part of the city’s religious life. The significance of functioning altars of worship within Ohrid’s church sanctuaries can appear to clash with the ticket booths and souvenir stalls at their entrances. But this contrast of the sacred with the seemingly profane in Ohrid (and, indeed, in churches throughout the world) bears witness to the dual role of historic sacred spaces within the modern world. To many outsiders to Orthodox Christianity, like myself, these medieval Byzantine churches are artifacts that preserve important historical information that can never be fully contained within the pages of printed books. For Orthodox Christians, however, these churches are part of a still living history of religious life in the city and dioceses of Ohrid. Yet still, for some, these churches are and will always be both artifacts and living sacred spaces.