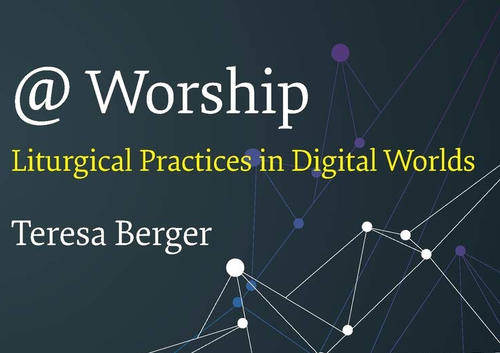 Learn more about Professor Berger’s book at Reading Religion.
Professor Teresa Berger teaches in the field of liturgical studies and in Catholic theology; she holds doctorates in both fields.  Her scholarly interests for many years lay at the intersection of these disciplines with gender theory. More recently, Professor Berger has turned her attention to liturgical practices in digital worlds.  Her book @ Worship was published by Routledge in the summer of 2017.  Other publications include Gender Differences and the Making of Liturgical History (2011); Fragments of Real Presence (2005); Dissident Daughters: Feminist Liturgies in Global Context (2001); and a video documentary, Worship in Women’s Hands (2007). Professor Berger has also written on the hymns of Charles Wesley and on the liturgical thought of the nineteenth-century Anglo-Catholic revival. She coedited, with Bryan Spinks, the volume Liturgy’s Imagined Pasts (2016) as well as the collection of essays The Spirit in Worship–Worship in the Spirit (2009) and served as editor of the volume of essays titled Liturgy in Migration: From the Upper Room to Cyberspace (2012). An active Roman Catholic, Professor Berger regularly writes for the liturgy blog “Pray Tell.” Originally from Germany, she has been a visiting professor at the Universities of Mainz, Münster, Berlin, and Uppsala. In 2003, she received the distinguished Herbert Haag Prize for Freedom in the Church.
ISM Director Martin Jean has performed widely throughout the United States and Europe and is known for his broad repertorial interests. He was awarded first place at the international Grand Prix de Chartres in 1986, and in 1992 at the National Young Artists’ Competition in Organ Performance. A student of Robert Glasgow, in the fall of 1999 he spent a sabbatical with Harald Vogel in North Germany. He has performed on four continents and in nearly all fifty states. In 2001 he presented a cycle of the complete organ works of Bach at Yale, and his compact discs of The Seven Last Words of Christ by Charles Tournemire and the complete Six Symphonies of Louis Vierne, both recorded in Woolsey Hall, have been released by Loft Recordings. Recordings of the organ symphonies and Stations of the Cross of Marcel Dupré are forthcoming on the Delos label. Professor Jean is on the board of directors of Lutheran Music Program.
This conversation is part of a series of talks with ISM faculty and fellows done via Zoom while working from home in spring 2020. You can find all the currently available discussions on the Reflections from Quarantine series. Look out for more videos as they become available.