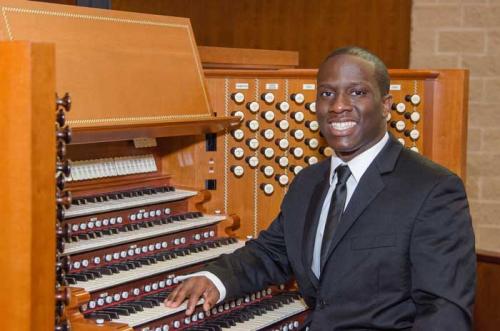 NOTES ON THE STAFF

Martin Jean has announced the appointment of Nathaniel Gumbs (M.M. ’11) as Director of Chapel Music at Yale University. He will work with students, faculty, and guests to coordinate music for three worshiping communities: the University Church in Battell Chapel, and at Yale Divinity School in both Marquand Chapel and at Berkeley Divinity School.

Nathaniel (“Nat”) has had many years of diverse experience in church music. He grew up at Trinity Baptist Church in the Bronx, and by the time he was in high school had already developed a love of leading congregational singing. As an undergraduate music major at the Shenandoah Conservatory in Virginia, he held part-time positions in Lutheran, Episcopal, and Presbyterian churches. In 2011, he received the Master of Music degree from Yale University (YSM and ISM), where he also served as organist for Marquand Chapel. Since graduating from Yale, he has worked as Director of Music and Arts at Friendship Missionary Baptist Church in Charlotte, NC, where he oversees 350-400 volunteer musicians and staff in four choirs and other ensembles, and also serves as Sunday organist. He is a frequent guest musician at Abyssinian Baptist Church in Harlem, and is organist and clinician for the Hampton University Ministers’ Conference. In 2012, he organized music for plenary sessions of the Democratic National Convention in Charlotte, NC. This year he was named in the “Top 20 Under 30” by Diapason Magazine.

Nat expects to complete the Doctor of Musical Arts degree at Eastman School of Music in 2018. His Yale appointment begins August 1.

Stephen Gamboa-Diaz has joined the ISM staff as Publications Assistant, supporting Melissa Maier in managing the ISM’s many publications, as well as in marketing and communications efforts.  Stephen’s principal areas of focus will be concert programs, worship bulletins, social media, calendars, and website content, as well as PRISM and The Yale ISM Review.

Stephen holds several music degrees, including two master’s degrees from Stony Brook University in harpsichord performance and in music history/theory, a D.M.A. from Stony Brook in harpsichord performance, and an Artist Diploma from Yale, also in harpsichord performance. A longtime church musician, he is currently choirmaster and organist at Saint Ann’s Episcopal Church in Old Lyme, CT, and an instructor of music theory at the Music Conservatory of Westchester, NY.  He has been associated with the ISM for several years as a performer on the harpsichord and continuo organ, also maintaining and tuning harpsichords in our care. In addition, this past year he has also played an administrative role assisting with concert programs, the ISM music library, and other calendaring and production systems development.

We welcome both Nat and Stephen to our ISM community, and thank Sara O’Bryan (M.M. ’12), who has ably served as Interim Director of Marquand Chapel Music for the last several years.

Nicole Benevenia (M.A.R. ’15), the ISM’s events coordinator for the last two years, has left Yale to move to Portsmouth, N.H. During her time here, Nicole was responsible for the execution of all public events not handled by the Concert Office, including lectures and readings, art exhibitions, conferences, and special performances.

Derek Greten-Harrison, who has been at the ISM for eleven years working as events and publications assistant, and most recently as coordinator of admissions, will be leaving the ISM at the end of June. He has accepted the position of Director of Admissions and Financial Aid at Virginia Theological Seminary in Alexandria, VA.

We will miss Nicole and Derek, thank them for their many contributions, and wish them well in their new endeavors.