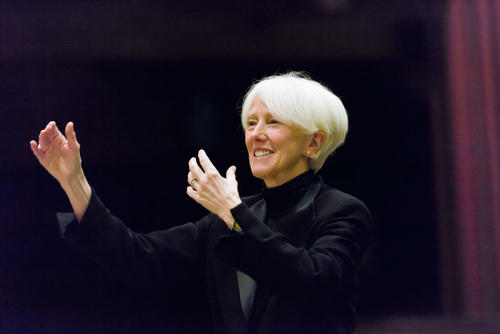 The Yale Institute of Sacred Music (ISM) is delighted to announce that the National Collegiate Choral Organization (NCCO) has established the Marguerite L. Brooks Commissioning Fund for New Music. The fund is named for the longstanding ISM and Yale School of Music faculty member who coordinates the choral conducting program at Yale, and who retires in June.

“As a charter member of NCCO and a current national board member, Marguerite L. Brooks has been supportive of our organization since its founding,” said NCCO president Dominick DiOrio (M.M. choral conducting ’08; D.M.A. ’12).  “Through her thirty-five years of work in collegiate choral music with the Yale Camerata, she has been a champion of living composers and the creation of new choral works.”

Yale Camerata, founded by Brooks in 1985, is one of Yale’s first campus and city arts collaborations: Its 60+ members are students, faculty, and staff from virtually every department of the University and singers from the Greater New Haven community. The ensemble has collaborated with the Yale Glee Club, Yale Schola Cantorum, Yale Philharmonia, Yale Symphony Orchestra, Hartford Symphony Orchestra, Yale Concert Band, New Haven Chorale, and many other groups. It has been featured on NPR’s Performance Today, and on local Connecticut Public Radio.

Brooks has long been committed to programming new music by composers of a diverse array of gender, ethnic, and racial backgrounds. The Camerata and its chamber chorus have performed music from the middle ages to the present day, and the catalogue of composers ranges from Albinoni to Argento, from Palestrina to Pärt – along with Julia Wolfe, David Lang, Tawnie Olson, Aaron Jay Kernis, Caroline Shaw, Robert Kyr, Reena Esmail, and many more.

Brooks’s broad vision for music-making has been passed on to her students. In a recent survey, alumni often cited her as their primary reason for attending Yale and as the person who influenced them the most. Many of these graduates have occupied positions of musical leadership at major churches and cathedrals around the world and in leading academic institutions.  Among her students are the founding conductors of Grammy-nominated choirs Conspirare, Roomful of Teeth, and Seraphic Fire.

Brooks has also been an active clinician, guest conductor, and jurist in North and South America, Europe, and Asia. She is the recipient of many awards, including the American Choral Directors Association (Eastern region) Helen Kemp Award for Lifetime Commitment to Excellence in Choral Music (2020), the Choral Arts New England Lifetime Achievement Award (2019), the American Choral Directors Association (Connecticut chapter) Lifetime Achievement Award (2016), and a Yale School of Music Cultural Leadership Citation (2015).

According to the NCCO’s official citation, “the Fund will support the creation of one new work every two years, and the work shall also receive its world premiere performance at the next-occurring biennial conference of the National Collegiate Choral Organization. In line with Brooks’s lifelong advocacy on behalf of composers from many varied backgrounds, the full list of commissioned composers supported through this fund must represent a spectrum of gender, ethnic, and racial diversity.”

“We are so pleased that Maggie Brooks has received such a fitting honor,” said Martin Jean, director of the ISM. “It ensures that her legacy will extend, in ever-widening circles, to future generations. We extend our most heartfelt congratulations to her.”