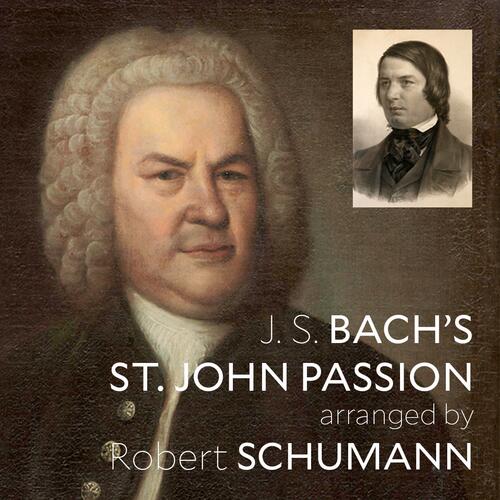 The conductor David Hill talks to ISM faculty members Markus Rathey and Jimmy Taylor about Robert Schumann’s little-known arrangement of Bach’s St. John Passion. We will hear a movement from the work as performed by Yale Schola Cantorum live in Woolsey Hall in 2018. The whole performance is available on the ISM YouTube Channel.

Professor Markus Rathey is a specialist in the works of Johann Sebastian Bach, 17th and 18th century music, and the relationship between music, religion, and politics during the Enlightenment. Rathey studied musicology, Protestant theology, and German in Bethel and Münster. He taught at the University of Mainz and the University of Leipzig and was a research fellow at the Bach-Archiv, Leipzig, before joining the Yale faculty in 2003.

Rathey’s two recent books, both published in 2016, explore some of the most important works by Johann Sebastian Bach. His book Johann Sebastian Bach’s Christmas Oratorio: Music, Theology, Culture (Oxford University Press 2016) is the first study of this composition in English and it not only sheds new light on Bach’s compositional practice but it also locates the oratorio within the religious and social landscape of eighteenth-century Germany. Rathey’s second recent book is an introduction to Bach’s Major Vocal Works (Yale University Press, 2016). Within the short time since its publication, the book has become a standard work on Bach’s sacred vocal music, praised for its depth but also its accessibility. As one reviewer highlights, it is a prime example for “bringing musicology to the public.” The book also appeared in a Japanese translation in 2017.

Earlier books by Rathey include a study of the Baroque composer Johann Rudolph Ahle, titled Johann Rudolph Ahle (1625-1673). Lebensweg und Schaffen (Eisenach, 1999), focusing on the relationship between compositional practice and the music market in the seventeenth century, and a study of C.P.E. Bach’s compositions for the Militia in Hamburg, Kommunikation und Diskurs: Die Bürgerkapitänsmusiken Carl Philipp Emanuel Bachs (Hildesheim, 2009), which explores the pedagogical function of music within the Patriotism discourse in the second half of the eighteenth century. In 2008 he published an edition of the music-theoretical writings by Johann Georg Ahle (Hildesheim, 2008).

Professor Rathey has published numerous articles on music by Bach, Mozart, Schütz, Buxtehude and their contemporaries in scholarly journals such as Eighteenth-Century Music, Early Music, Early Music History, Journal of Musicological Research, Bach-Jahrbuch, and Schütz-Jahrbuch. He frequently serves as a commentator on J.S. Bach and on the relationship of music and religion for a number of major media outlets, including The Wall Street Journal, The Economist, and BBC Radio.

Rathey is president of the American Bach Society and past president of the Forum on Music and Christian Scholarship. He currently serves on the editorial boards of BACH: Journal of the Riemenschneider Bach Institute and the Yale Journal for Music and Religion.

With an extensive repertoire ranging from the medieval period to the twenty-first century, tenor James Taylor devotes much of his career to oratorio and concert literature. As one of the most sought-after Bach tenors of his generation, he has performed and recorded extensively with many of today’s preeminent Bach specialists, including Nicholas Harnoncourt, Philippe Herreweghe, René Jacobs, and Masaaki Suzuki. Since 1993, Taylor has maintained a close relationship with conductor Helmuth Rilling and the International Bach-Academy Stuttgart, performing and teaching master classes worldwide. On several occasions, he has been a juror and consultant for the International Bach-Competition Leipzig. In 2008 he debuted with the New York Philharmonic under the direction of Kurt Masur, singing the role of the Evangelist in Bach’s St. Matthew Passion. Taylor’s career as an oratorio specialist has taken him throughout the United States, South America, Japan, Korea, and Israel, and to virtually all the major orchestras and concert halls of Europe. He is particularly proud to have performed Britten’s War Requiem in the Munich Residence on the sixtieth anniversary of the end of World War II. Taylor has recorded extensively on the Hänssler, harmonia mundi, Limestone, Naxos, and ArkivMusik labels. He joined the Yale faculty in 2005 and serves as coordinator for the voice program in Early Music, Art Song, and Oratorio.