Podcast: Composers Reflect on Their Work 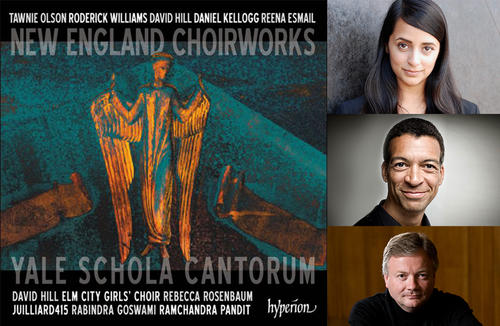 Conductor David Hill talks with composers Roderick Williams and Reena Esmail about their commissioned works for Yale Schola Cantorum, released on the Hyperion label. We will hear two complete movements from that recording whose themes of equity, unity, and peace speak to the urgent issues of our time.

Download the CD booklet for composer notes as well as texts and translations. Selections from New England Choirworks on the Hyperion label are used with permission. | Yale Schola Cantorum/Hyperion

Roderick Williams is a British baritone who performs a wide repertoire vrom Baroque to contemporary music, in the hoper house, on the concert platform, and in recital. He won the Singer of the Year Award in the 2016 Royal Philharmonic Society Awards and was awarded the OBE for services to music in June 2017. As a composer, he has had works premiered at the Wigmore and Barbican Halls, the Purcell Room and live on national (UK) radio. He was artistic director of Leeds Lieder in 2016. | Roderick Williams (BBC)

Indian-American composer Reena Esmail works between the worlds of Indian and Western classical music, bringing communities together through the creation of equitable musical spaces. She was named a 2019 United States Artist Fellow in Music, and was the 2019 grand prize winner of the S&R Foundation’s Washington Award. She was previously a 2017–2018 Kennedy Center Citizen Artist Fellow. In addition to her work as a composer, Esmail is the co-artistic director of Shastra, a non-profit organization promoting cross-cultural music that connects the great musical traditions of India and the West. | Reena Esmail’s website

All music from New England Choirworks on the Hyperion label. Used with permission. | Yale Schola Cantorum/Hyperion

Reena Esmail: “Hinduism” from This Love between Us: Prayers for Unity, premiered by Yale Schola Cantorum conducted by David Hill in 2016. Performed with Juilliard415 with vocal soloists James Reese and Addy Sterrett and Rabindra Goswami, sitar, and Ramchandra Pandit, tabla.