When words fail, when we confront the ineffable, we are left to create music, literature, performances, and visual art in an attempt to describe what we feel. The current art exhibition at the Yale Institute of Sacred Music (ISM), Ineffable Manifestations, celebrates the creations of artists who strive to encapsulate some aspect of the sacred. For the seventeen contributing artists, these distinct manifestations of the sacred are personal. From a variety of faith backgrounds, the individual artists explore the manifold dimensions and textures of sacrality. In each work of art, a world is created. These worlds are made in oil paint, recycled plastic, epoxy resin, Kentucky coal, photography, and other diverse media. In these intimate realms, the artists explore their sacred, from a divinity to a ritual; from a family home to a natural landscape.

Over the course of a weekend this past February, I helped install Ineffable Manifestations in the ISM’s new home in Miller Hall. I assisted the curator, Jon Seals (M.A.R. ’15), who has returned annually to New Haven since graduation to organize ISM-sponsored exhibitions in the halls of Yale Divinity School in Sterling Divinity Quadrangle (where the ISM formerly made its home); Ineffable Manifestations is his sixth curatorial project with the ISM. During my own time here, he has become a mentor in curating, and a generous friend to me. While I have always been inspired by his commitment to his fellow artists and their visions, it was astounding this time to see Jon collaborate with so many artists in a completely different venue. It was also exciting to see how this contemporary art exhibition transforms the Tangeman Common Room, corridors, and classrooms of this historic building. 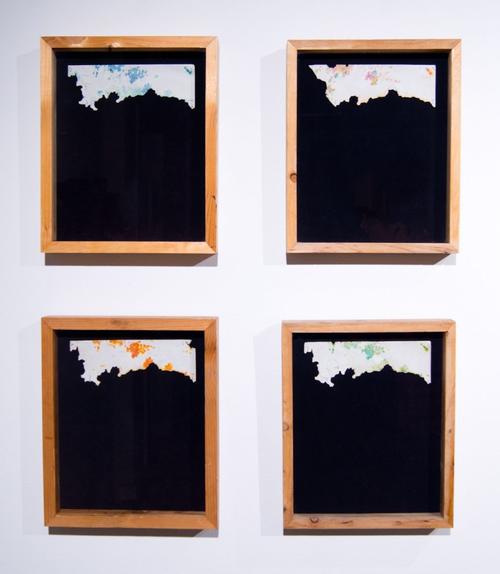 In one installation, a grid of four shadow boxes hangs on a sunny wall. Inside each of the boxes, a weathered scrap of paper is carefully pinned to a black fabric backing, like a specimen in a natural history museum. As a viewer, I am tempted to compare the forms and contours on these similarly tattered pages. The artist, Kenny Jensen, collected these termite-eaten paper remnants from his grandfather’s old workshop. In this constructed display, the papers become something rare, or something special. A native of Florida, Kenny has a deep connection to the state’s unique natural landscape. He collects found materials while on walks or during his work as a native landscape gardener. This series of salvaged paper from his grandfather’s shop is titled Remaining Elements and the individual boxes are given subtitles for water, air, fire, and earth.

In his artist statement, Kenny writes:

I hope to open up a dialogue toward reconstructing new ways of seeing ourselves and our collective place in the world – to encourage a deeper understanding of what it means to be human, and to have a more grounded and sustainable connection to the earth we are given to live and move and have our being.

The world built within these shadow boxes creates a space to reflect on “what it means to be human.” In front of the Remaining Elements series, I am reminded to look more closely for the sacred both outside in nature and in the deepest crevasses of my family history. In addition to this installation by Kenny, Ineffable Manifestations features works by Eoin Burke, Gaby Collins-Fernandez, Ryan Foster, Bill Greiner, Camille Hoffman,  Natalija Mijatovic, Kirsten Moran, Laura Mosquera, Margaret Olin, Meg Pierce, Marium Rana, Rick Bartow, Nalini Jayasuriya, Ellen Priest, He Qi, and also Jon Seals, the curator.

Describing the impetus of this current exhibition, Jon writes, “I set out to gather a diverse collection of artists whose visual work gives expression to the life affirming gifts of the sacred.” Jon organized Ineffable Manifestations to celebrate this pivotal junction in the life of the Institute, gathering artworks from the ISM’s permanent art collection as well as works by artists who had participated in previous exhibitions over the past few years. He also invited new friends and former mentors to contribute art as well. Ineffable Manifestations truly commemorates the ISM’s support of the visual arts, past and present. Jon continues:

The formal elements of art and principles of design, finessed into place by these artists, reveal realities words fail to fully render. The ISM is a place that not only allows for, but heralds, this particular kind of artistic and spiritual exploration. This exhibition aims to celebrate the work of these artists and encourage their work to enter into the rich dialogue and outward movement of the ISM community. 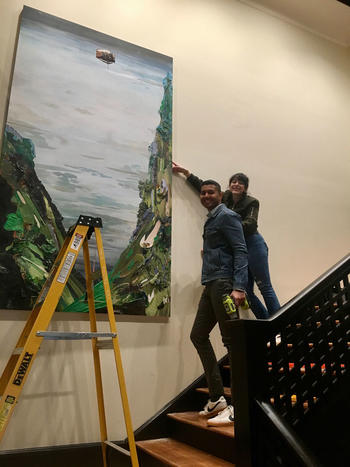 As a student, I was able to see the artworks’ instantaneous transformation of Miller Hall. Of course, after installing the show with both Jon and fellow student Nazeer Bacchus, I know this process was anything but immediate. The three of us spent nearly half a day properly hanging Camille Hoffman’s large landscape painting in the stairwell to ensure the integrity and safety of the artwork, building, and viewers.

It is always a challenge to display art in nontraditional spaces, outside of a gallery. Yet, in Miller Hall, Ineffable Manifestations intercepts the building’s everyday occupants and its many visitors. This pristine, creamy space is now enlivened by the color-filled works of Laura Mosquera and Ellen Priest.

Now, upon entering the building, visitors are confronted by a pair of oil paintings by Kirsten Moran. These dripping and blue-hued canvases chronicle the artist’s “personal spiritual journey through the matrilineal line.”  These works invite my peers and me to enter into conversations around the indescribable aspects of the sacred, including ancestry, gender, and the spirit.

While attending the exhibition’s opening reception, I was able to meet Marium Rana, who is sharing her work at the ISM for the first time in this exhibition. Absorbed by Marium’s detailed works in pen and aqueous media, I set a time to meet with her and learn more about her process.

When describing her art, Marium says, “I make places that don’t exist.” She worked on A Place to Call Home: Starlight Mesa (below) while completing a two-month residency in Joshua Tree National Park, a place which she described as “like having reached the end of the world.” In an isolated private cabin, Marium remained awake during the night, when she had the most energy. She often painted in the morning hours. There, Marium also discovered records by Johnny Cash and Prince, as well as documentaries about the West Coast. 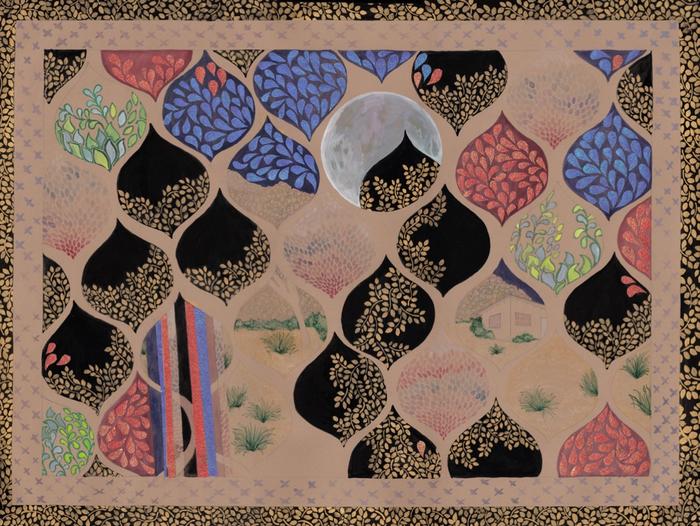 Inspired by the history of her desert surroundings, A Place to Call Home: Starlight Mesa contains a small “homesteader” cabin. Simple, rectilinear dwellings like the one depicted in Marium’s artwork can been seen throughout the desert due to the Homestead Act of 1862, in which United States citizens could claim Federal Government-issued deeds to parcels of land after building a small cabin on the property and making so-called improvements to the seized lands. Many of those homes are now abandoned.

For Marium, this residency was also a time to learn more about her own sense of home. While in the southern Californian desert, Marium was able to travel to meet distant family friends in Anaheim, California, where her parents had lived before she was born. There, she was able to drive on the same streets her parents once traversed and to witness her mother’s tear-filled reunions with loved ones. She was even able to observe Ramadan with some of these family friends, since the residency coincided with the celebration. Sometimes, “you have to get far away from home to understand it better,” Marium commented.

At home with my own family and my friends, I have also found myself beyond words and amongst the divine, in both moments of joy and trial. For me, a sense of home was a reoccurring theme in the midst of this diverse exhibition reflecting on the ineffable. Yet, the works by these seventeen artists will undoubtedly lead viewers on innumerable paths of meditation. No two viewers will have the same experience. Jon Seals writes

My hope is that the viewer takes time to sit with the artwork and read the artists’ statements and biographies; to consider how the intersections between and among works grow and multiply the complexities of the sacred… . May visitors let the worlds these artists have created activate and spill into their lives and hearts as they continue on their quest to care for the cultures within which they operate.

Ineffable Manifestations embodies the plurality of sacrality; it aptly showcases the variety of the sacred visual arts. These works allow us to reflect communally on our shared and quite varied experiences of the divine, as well as on our futures together. The exhibition is on view in Miller Hall through June 19.