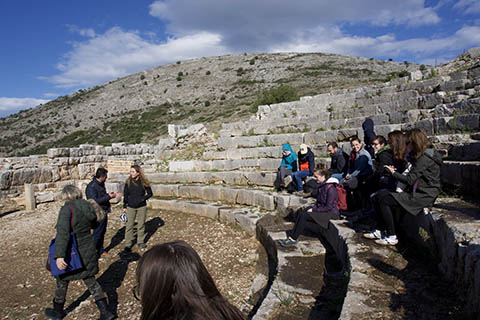 Ed. note: Building on the success of the travel seminars offered by ISM faculty in previous years (most recently to England in April of 2017, led by Bryan Spinks and Henry Parkes – see story here), the ISM has expanded the travel seminar model, inviting applications from other team-taught, interdisciplinary graduate seminars elsewhere at Yale for travel funding to be able to offer the travel/study experience to a wider cross-section of graduate students at the University. This fall, the first of these was offered: The Ancient Greek Festivals Travel Seminar, taught by Jessica Lamont (assistant professor of classics) and Carolyn Laferrière (Archaia Postdoctoral Associate in Ancient and Premodern Cultures and Civilizations and Lecturer in History of Art and Classics) embarked for Athens, Attica (Eleusis, Brauron), the Peloponnese (Olympia, Isthmia), and Delphi over the Thanksgiving break. Three students representing three different disciplines offered their reflections on the experience.

As a student of Ancient History, I have long read about the sanctuaries and temples of Greece. Delphi, the site of the most important oracle of Apollo in antiquity, is nestled high up on Mt. Parnassos. I had read about the droves of visitors to the site, spanning nearly a millennium; from humble farmers and sick mothers to Theban kings and Roman Emperors, all seeking prophetic answers to their troubles. A council of priest-politicians governed the site and the Pythian Games, a large festival-competition that would see athletes, musicians, and playwrights from the world over, compete for kleos aphthiton, eternal glory. Virtually no wars could be waged, no cities could be built or destroyed without first consulting the oracle at Delphi. The sanctuary then was a central node through which much of the ancient Mediterranean, personal and political, functioned. I thought I had understood this, and therefore, Delphi.

But having seen the site itself, I was immediately struck by the naivety of my former understanding. Many historians stress the religious and spiritual importance of the site, yet it cannot be fully comprehended until you climb up the winding Sacred Way yourself. Standing on the platform next to the ruins of the Temple of Apollo, overlooking the pearlescent Sanctuary to Athena Pronaia below and the sacred olive groves reaching down to the azure-blue sea, you immediately understand the sanctity of the site. This was a palpable, bodily experience almost impossible to put into words. This was a seat of a god, and that the sanctuary had to be located here, not on any other peak, but here, where the feeling—whatever it is—is most powerful. This was Delphi. 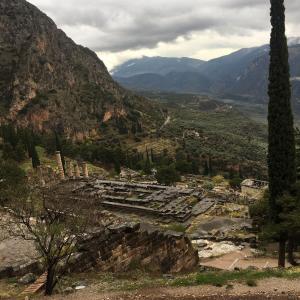 At left: Temple of Apollo at Delphi (Photo by Meghan Poplacean)

As we were arriving, the sun broke through the clouds and we were welcomed by the “glittering rocks” of Parnassos after a rainfall, described by many ancient poets. Although the colors, the music, the densely packed treasures, and people had long faded from the site, Parnassos’ glittering face remained. I had never experienced a closer, more visceral connection to the people I have dedicated my adult life to studying. This experience—and my new understanding of sanctity inscribed in landscape—will doubtlessly resonate through my work as a student of ancient religion.

Below: Temple of Apollo at Corinth (Photo by Meghan Poplacean) 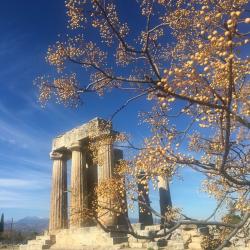 This Ancient Greek Festivals course was the first time I’ve personally experienced a travel seminar promoted and funded by the Institute of Sacred Music. In Greece, I witnessed the classroom conversations of the preceding months come to life as I learned from the context of what I saw, felt, heard, and smelled around me. To apply what I learned so immediately, and so intimately, was an incomparable benefit found only in this travel seminar.

I also appreciated that the course was designed to attract a diverse cohort of Yale graduate and undergraduate students. Even as a joint-degree candidate in Religion and Ecology this class provided the amazing opportunity to connect and collaborate with art historians, scholars of Roman history, and those fluent in the Greek language (both ancient and modern). 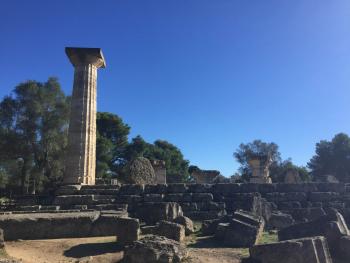 I enjoy immensely the interdisciplinary dialogue from the weekly ISM Colloquia, so this course was like experiencing “ISM 2.0.”  Expanding beyond the boundaries of what the ISM offers (with its unique blend of musicians, artists, authors, and religious scholars), it situated me in a real-life paradigm with application outside of university walls.

This travel seminar was the ideal environment to explore the visual, theological, and ecological implications found in ancient olive harvesting practices. The trip to Greece coincided with the olive harvest and my academic pursuits came alive with historical retrospection and contemporary application. As a result of the insightful readings, on-site materials, and contributions from my professors and my peers, for my final class project I focused on ancient arboricultural and harvesting practices of sacred olive trees, the oil of which was an award for athletic victors in the ancient Panathenaia religious festival. 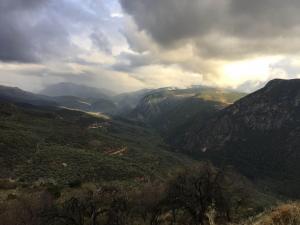 At left: Olive Grove of Amfissa, the oldest olive forest in Europe, as seen from Mount Parnassus. Delphi, Greece. (Photo by Anna Thurston)

What would our modern Olympic games look like if, instead of gold medals, victors competed for olive oil made from sacred trees? This question (among many) fueled my drive to thrive in this course and inspired me with even more questions to answer as I continue my time here at Yale.

It is a very particular experience to visit a country for the first time as a part of an ISM-sponsored travel seminar. It was doubly so for me on the trip to Greece, a lone medievalist exploring the sites of the ancient Greek festivals, their art, architecture, and sacred landscape.

After a quick but thrilling trip to the Byzantine monastery of Hosios Loukas, I found myself immersed in the art of ancient Greece. Examining works of art I had previously only seen in textbooks and slideshows, I got a chance to briefly experience my own field of art history as something new and unknown. I could appreciate the firm lines and the scale of the archaic kouroi, representing nude male youths at the height of their physical power. In the Acropolis Museum, I followed as a procession of statues marched along the walls once inside the Parthenon, reflecting the movement of people and animals during the Panathenaic procession in honor of the goddess Athena. The Acropolis itself was a revelation. 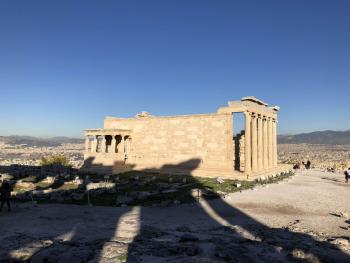 At left:The Acropolis, Athens, View of the Erechtheion (Photo by Kristina Potuckova)

Comfortably familiar from a myriad of images, it nonetheless turned out to be much more spectacular when experienced first-hand. The majesty of the architectural remnants in the stark November sunlight was overpowering, supplying just a fleeting impression of the once colorful and bustling ancient city.

Remembering the play of light and clouds at Delphi, it was easy to grow lyrical in my description of Greece. That tendency speaks primarily to the power of exploring objects and places in their materiality and physical setting, however much remains of it. This, along with being guided through these museums and sites by knowledgeable colleagues and professors, enhanced my understanding of the material of the course tremendously. The Greece trip combined the best of both worlds: the opportunity to learn in depth the various facets of ancient Greek culture while coming face-to-face with the objects and the monuments it left behind. 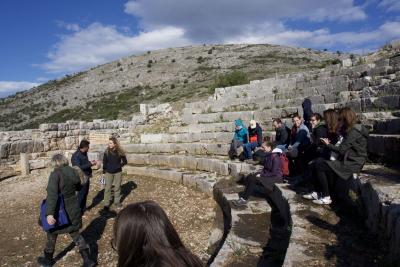