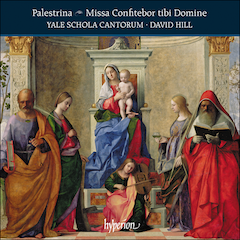 We are excited to announce the release of Yale Schola Cantorum’s album of Palestrina’s Missa Confitebor tibi Domine and other works on the Hyperion label. The ensemble, led by conductor David Hill, was joined by internationally-acclaimed cornettist Bruce Dickey and organist Liuwe Tamminga to perform select instrumental tracks.

To listen to samples of individual tracks and to purchase a copy, visit Schola Cantorum’s Palestrina album page at Hyperion records. A general preview is available in the video at the bottom of the page.

This Palestrina recording follows the release of an album of Fauré’s Requiem and other sacred music. Visit the Fauré album page at Hyperion records to preview and download.

Both albums were recorded by the ensemble in the 2014-15 academic year. Check this space for future releases!

UPDATE: as of February 14, the Palestrina album is at #19 on the UK’s chart for Specialist Classical Music!