The facilities for the Institute of Sacred Music are located primarily on Prospect Hill. The Sterling Divinity Quadrangle houses the ISM Great Hall–a multi-purpose room used for classes, rehearsals, and other events–and also provides offices for some ISM faculty and staff. The organ studio contains the Martin Pasi organ from 2011 and is used for teaching and practice. Four organ practice rooms are available to those taking organ lessons and three piano practice rooms are open for general usage. The ISM choral library houses over 7,500 titles for use by the many ensembles sponsored by the ISM. 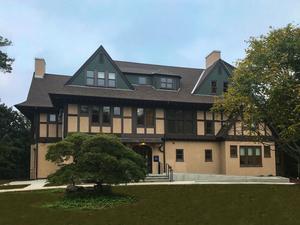 The newly renovated Miller Hall, at 406 Prospect, opened in 2018 to provide space for administrative staff, fellows, and additional faculty of the Institute of Sacred Music. Built first as a private home in 1909 by Yale graduate and New York architect Grosvenor Atterbury, it then was operated by Dwight Hall at Yale as the International Student Center from 1948-2005. In 2018, the building was named Miller Hall in honor of Clementine Miller Tangeman and Xenia S. and J. Irwin Miller, the primary benefactors of the Yale Institute of Sacred Music. In addition to offices, Miller Hall contains the Clementine Miller Tangeman Common Room used for informal gatherings, as well as a workroom for students, meeting rooms, and teaching spaces. 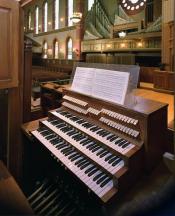 The main buildings of the School of Music are Leigh Hall at 435 College Street; Sprague Memorial Hall, which also houses Morse Recital Hall, at 470 College Street; and Hendrie Hall at 165 Elm Street. The Adams Center for Musical Arts, which opened in January 2017, connects Leigh Hall and the newly renovated Hendrie Hall by way of a new structure that includes a student commons with a four-story atrium. For the first time, musicians from across campus can come together and interact as one community. The complex is a state-of-the-art facility with enhanced acoustics and the latest instructional technology in all spaces. The Adams Center’s three-story orchestra rehearsal hall is the first home for the Yale Philharmonia and Yale Symphony Orchestra. Reimagined spaces in Hendrie Hall house the University bands and the Yale Glee Club; the School’s opera, brass, and percussion departments; an Ensemble Library for all resident ensembles; and the deputy dean’s office. Twenty-six new practice studios and six classrooms provide space for Yale College and Yale School of Music students to meet, study, practice, and rehearse chamber music.

The Yale University Collection of Musical Instruments, containing nearly one thousand instruments, is located at 15 Hillhouse Avenue. Woolsey Hall, which contains the Newberry Memorial Organ, is used throughout the year for numerous concerts and recitals.

Marquand Chapel, at the heart of Sterling Divinity Quadrangle, is home to an E.M. Skinner organ, a Hammond B-3 electronic organ, and the Baroque-style Krigbaum Organ by Taylor & Boody. These instruments, the acoustics, and its flexible seating arrangements make Marquand Chapel a unique performance space at Yale. 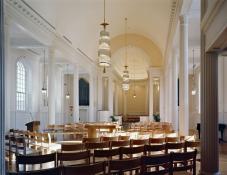