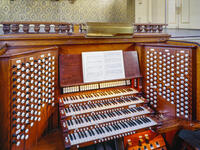 Join us for a concert in the “Great Organ Music at Yale” series with Dr. Nathaniel Gumbs. Featured works by Franck, Haywood, Hollins, Price, Rossini, and Stoddart will be played on Woolsey Hall’s Newberry Organ. We will also welcome two guest performers, steelpan musician  Kenneth Joseph, and dancer Freddie Moore.

Concert organist and ISM graduate Nathaniel Gumbs (M.M. ‘11) has performed at many venues in the U.S.A. and abroad. He is Director of Chapel Music at Yale University where he coordinates music for three worshiping communities: the University Church in Battell Chapel, and at Yale Divinity School in both Marquand Chapel and Berkeley Divinity School. 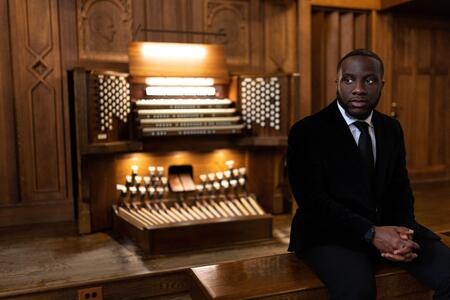 Nathaniel Gumbs is a native of the Bronx, NY and has performed throughout the United States and abroad, including Antigua, St. Thomas, Ghana, Paris, and Munich.  He currently serves as Director of Chapel Music at Yale University where he works with students, faculty, and guests to coordinate music for three worshiping communities: the University Church in Battell Chapel, and at Yale Divinity School in both Marquand Chapel and at Berkeley Divinity School.

Dr. Gumbs earned his undergraduate degree from Shenandoah Conservatory in Virginia, his Master of Music degree from Yale University, and in 2021 completed a Doctor of Musical Arts degree at the Eastman School of Music.  Nathaniel’s principal teachers include Steven Cooksey, David Higgs, and Martin Jean.

Prior to his position at Yale, Dr. Gumbs served as Director of Music and Arts and Church Organist at Friendship Missionary Baptist Church in Charlotte, NC, where he led several hundred volunteer musicians and staff in four choirs and other ensembles.  He has also been a frequent guest musician at Abyssinian Baptist Church in Harlem and served as organist and clinician for the Hampton University Ministers’ Conference.

In 2017 The Diapason magazine recognized Nathaniel as one of 20 outstanding organists under 30 years old for his achievement in organ performance and church music.  In 2018, Nathaniel curated the opening Hymn Festival (Singing Diverse Music in The New Church) for the Hymn Society’s annual conference.